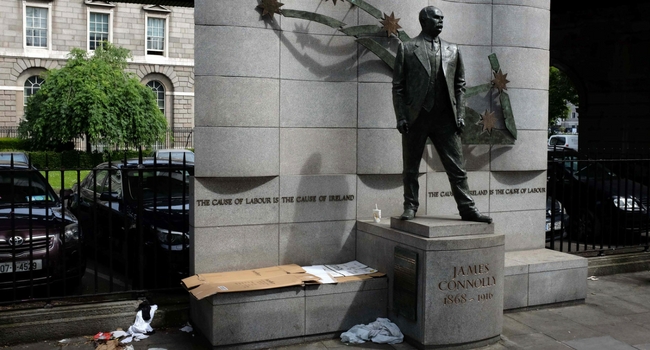 When Ireland became an independent State it inherited some appallingly bad housing conditions. This was most notoriously the case in the severely deprived areas of inner-city Dublin, but inadequate and overcrowded housing which lacked basic facilities was also prevalent in towns and villages and rural areas around the country. Over the following seven decades, significant improvements in Irish housing took place, not just because the country (eventually) became more prosperous but because public policy sought to bring this about. Grants and other subsidies provided by the State enabled an increasing number of households to become home-owners; in addition, as a result of large-scale provision by local authorities, tens of thousands of low-income households were enabled to access affordable and secure social housing. This is not to suggest that the policies pursued were always adequate – mistakes were made, most notably the failure to bring about greater social integration through housing and the frequent failure to provide essential social and community facilities in new housing developments.

Yet, overall, it is telling that in a review of Irish housing published in 1988, the National Economic and Social Council could say: ‘In recent years there is evidence that the historical housing problems of overall shortages and poor housing conditions have been largely resolved. … Among countries of roughly similar GNP per capita, Ireland has close to the best overall standard of housing’.

Almost thirty years later, however, the country is once more in the midst of a serious housing crisis, most acutely evident in the fact that officially recorded homelessness is now at its highest-ever level. Over 8,000 people, 3,000 of them children, were living in emergency accommodation in August 2017. The waiting lists for social housing are also at record levels, and now include 91,600 households (in which are living 210,000 people),which is more than three times the number on waiting lists in 1996. Many other families and individuals are also experiencing housing difficulties – for example, as a result of mortgage arrears or because the rent they have to pay represents a disproportionate share of their income.

Clearly, the policies pursued over the past quarter-century have failed to ensure adequate, affordable and secure housing for all people living in Ireland. As this issue of Working Notes highlights, these policies have not just reflected a market-oriented approach to providing housing, but increasingly have allowed housing to be treated as a commodity, an investment opportunity, yet another financial instrument. In such a situation, housing loses its essential purpose: meeting a fundamental human need and fulfilling a basic human right of every person. This ‘commodification and financialisation’ of housing, which is a global phenomenon, became starkly evident in Ireland during the economic boom, and its influence has persisted through the downturn and now into the recovery of the Irish economy.

When Leilani Farha, the UN Special Rapporteur on the right to adequate housing, addressed the UN Human Rights Council on 1 March 2017, she said: ‘… the housing sector has been transformed … It is no longer as we once knew it. Housing has been financialized: valued as a commodity rather than a human dwelling, it is now a means to secure and accumulate wealth rather than a place to live in dignity, to raise a family and thrive within a community’. Ms Farha was speaking in a global context but her words seem all too applicable to Ireland’s experience in recent decades.

The contributors to this issue of Working Notes argue for a radically different approach to housing policy in Ireland, one which is based on recognising housing as a fundamental human right and which treats housing not as an investment or asset but as the means of fulfilling that right. Such an approach is needed to respond to the acute housing problems being experienced by so many and to address the ways in which the housing system is serving to deepen inequalities in income and wealth distribution in this country.

Without such a radical change in approach, there is a real danger that, in Ireland, housing will, to employ the words of the UN Special Rapporteur, ‘… continue to become a prize for the wealthy, and a dream for the majority’.