77: Caring for Our Common Home 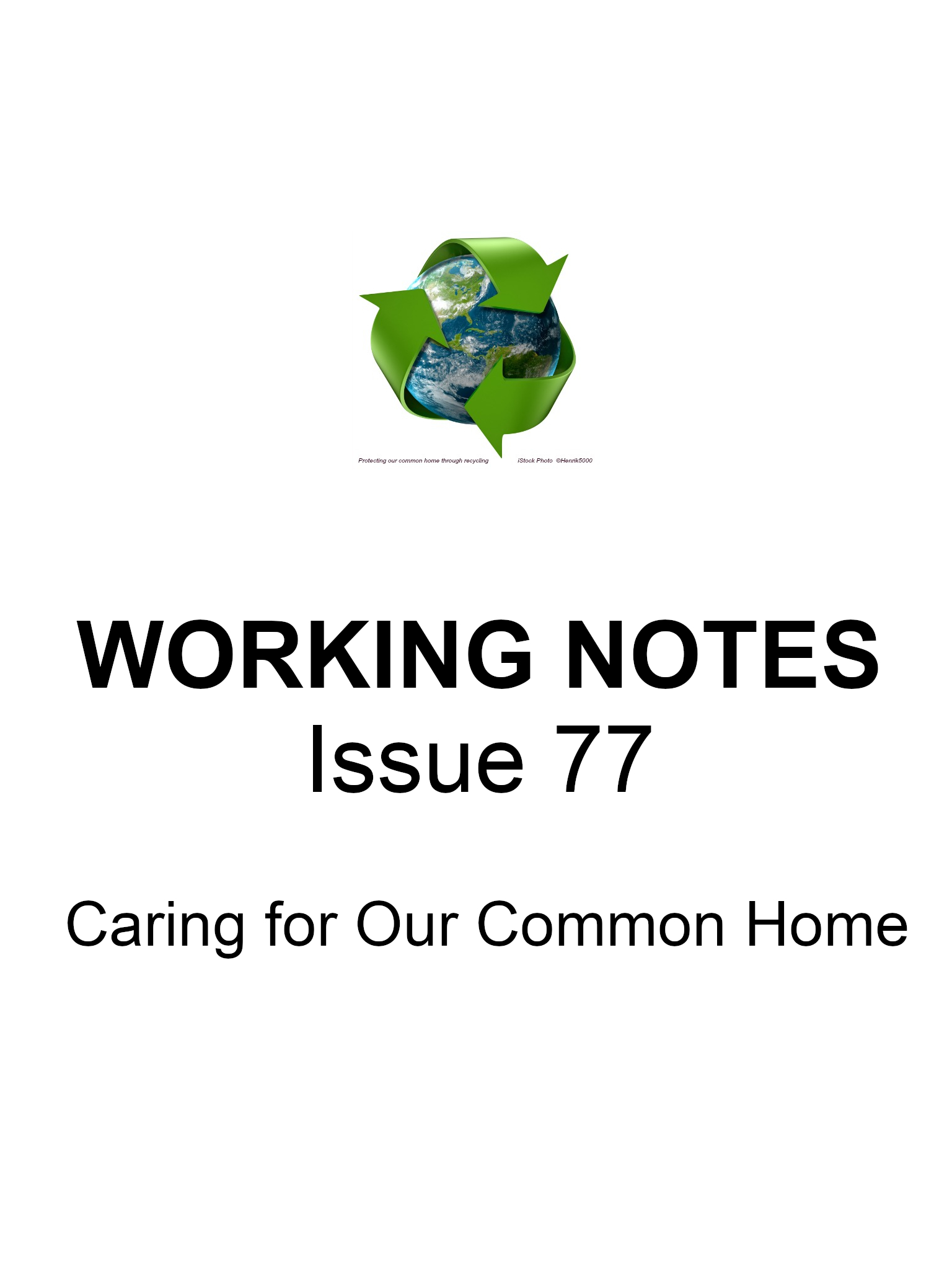 Pope Francis’ encyclical, Laudato si’: On Care for Our Common Home, the first papal document devoted entirely to ecology, has generated considerable interest and debate since its publication in June 2015. The encyclical is at once an exploration of the various environmental crises facing the world, a radical critique of current economic models, a call to action, and a reminder of the values which underpin Christian concern for the environment.

In the opening article of this issue of Working Notes, Donal Dorr writes that at the heart of the transformation which Pope Francis calls for, in response to the ecological crisis, is the replacement of present-day economics – in which the market and the pursuit of profits dominate – by an ‘economic ecology’, which takes proper account of ecological considerations. Donal Dorr suggests there are three particularly strong statements in the encyclical. These are: the need to reconsider the assumption of continuing economic growth and even to acknowledge that ‘the time has come to accept decreased growth in some parts of the world’; the need to move away from reliance on fossil fuels; the need to recognise the global inequity inherent in the environmental crisis, such that the developed world now owes an ‘ecological debt’ to the developing world, because it is the former which has played the predominant role in generating ecological problems but it is the latter which is forced to bear the greatest impact, though least able to do so. Donal Dorr suggests these statements pose a significant challenge to political leaders, who for the most part have been unwilling to face up to, and to act upon, the issues involved.

Writing about the UN Climate Change Conference in Paris in December 2015, John Sweeney notes the high expectations for what may be achieved at these negotiations. He says that the preparatory work for the Paris conference has been strengthened by the publication of the 2013 Fifth Assessment Report of the Intergovernmental Panel on Climate Change, which set out the scientific evidence on global warming and emphasised the role of human activity in generating this. He highlights the significance of Pope Francis’ encyclical in terms of making ‘the moral and ethical case’ for international action on climate change. However, John Sweeney also points to the reality that annual climate conferences over the past twenty years have failed to produce a global agreement capable of achieving the reduction in carbon emissions necessary to avoid dangerous climate change. He concludes that the most likely outcome of the Paris conference will be ‘an agreement that will be marketed as a political triumph, but fall short of the radical change of hearts and minds necessary to protect the world from 2°C warming over the next four decades’.

An important feature of Pope Francis’ encyclical is its call to individuals and civil society organisations to do whatever they can to respond directly to the environmental crisis. In this issue of Working Notes, six church communities in Ireland outline the ecology work they have been carrying out for several years. These articles reflect a commitment to taking practical action – for example, minimising the use of resources; reclaiming and replanting garden areas; incorporating environmentally friendly features into building projects – and to including environmental concern in prayer and liturgy. The articles also describe education and awareness-raising aimed not only at encouraging changes in lifestyles, but developing greater consciousness of the political dimensions and global justice aspects of the environmental crisis.

In the final article of this issue, Gerard Doyle suggests that social enterprises – that is, enterprises which have as their core aim the realisation of a social objective, rather than the maximisation of profit – can make an important contribution to addressing environmental issues. Focusing on social enterprises engaged in the production of renewable energy, he argues that the experience of other countries shows how such enterprises have the potential to play a significant role in meeting the energy needs of local communities and in assisting the transition to a low carbon economy. He suggests that the Irish State needs to place greater value on the role of social enterprises in providing renewable energy and that it should prepare an overall strategy for the development of this sector.