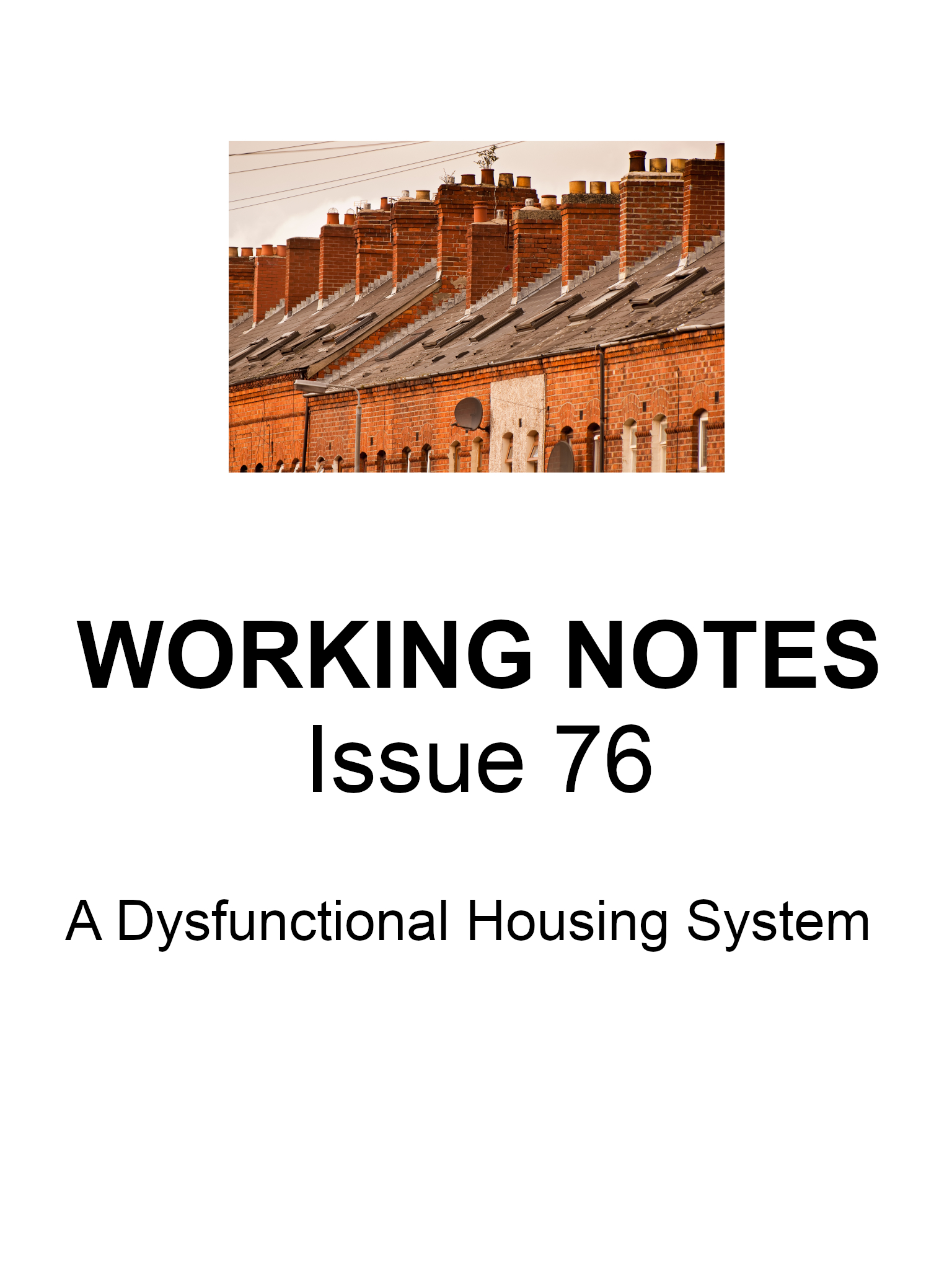 In little more than a decade, the housing system in Ireland has gone from the peak phase of a property boom to a collapse of the market and dramatic falls in both housing output and prices, and now to a situation where house prices are rising, particularly in urban areas, but where we continue to see the unfolding of the consequences of the ‘boom and bust’ in Irish housing – and the failure of public policy evident in both phases.

This issue of Working Notes draws attention to the significant problems now facing tens of thousands of households in Ireland in terms of housing access, affordability and security.

The most serious indicator of the housing crisis is the increase in homelessness, reflected in the rise in the number of people sleeping rough, and in the number of individuals, and of families with children, having to live in emergency accommodation. Peter McVerry writes: ‘Homelessness is now worse than at any time in recent memory …. Many of the ‘new homeless’ have never been homeless before, and until this current crisis would never for a moment have thought they could become homeless’.

Preventing homelessness, and enabling people to move out of homelessness, requires either access to social housing provided by a local authority or a voluntary body, or access to accommodation in the private rented sector. Yet, as shown by Peter McVerry, and in articles by Bob Jordan and P. J. Drudy, both options are now effectively closed off to many people, as a result of the lack of new supply of social housing over the years of austerity, and the sharp increase in rents in the private rental sector in urban areas, to the point where even the cheapest accommodation has become unaffordable for those on low incomes.

Another aspect of the housing crisis in today’s Ireland is the  widespread problem of mortgage arrears. Cathal O’Connell and Joe Finnerty show the sharp increase in arrears which occurred once the economic recession took hold. They note that while the overall number of arrears has fallen in the past couple of years, the proportion of accounts in long-term arrears has grown, particularly those in arrears for more than two years. They argue that given the scale of the arrears problem, the number of home repossessions so far has been relatively low, but that the trend towards longer-term arrears, and the reality that financial institutions are coming under increased pressure to take definitive action in response to this problem, would suggest that a significant increase in repossessions is now a distinct possibility.

To-date, the policy responses to the housing difficulties facing so many households do not suggest the degree of urgency that these problems, which can have such profound consequences for people’s quality of life, would merit. The most significant measure has been the publication of a Social Housing Strategy, in November 2014. This includes a commitment to resume the provision of new social housing by local authorities and voluntary bodies, with a target of 35,000 additional units by 2020. While this is welcome, the fact is that this number of additional units would accommodate less than 40 per cent of the households currently on the housing waiting list. The reliance on the private rented sector to provide a further 75,000 homes for people qualifying for social housing has to be a cause for concern, given the problems regarding supply, affordability and security of tenure in that sector.

In addressing the problems of the Irish housing system, a key question is what values will shape the policies to be adopted. Gerry O’Hanlon points out that during the housing boom it was the values of the market which predominated, so that housing came to be viewed as ‘a commodity, to be traded like stocks and shares’. But he notes that housing is a basic need, and right, of every person – and indeed that Pope Francis has referred to housing as a ‘sacred’ right. Gerry O’Hanlon highlights the relevance of values such as the dignity and equality of all persons, solidarity, and respect for the common good to the issue of housing. Is there the public and political will to allow such values to influence both the response to our immediate housing problems, and the long-term planning of our country’s housing system?