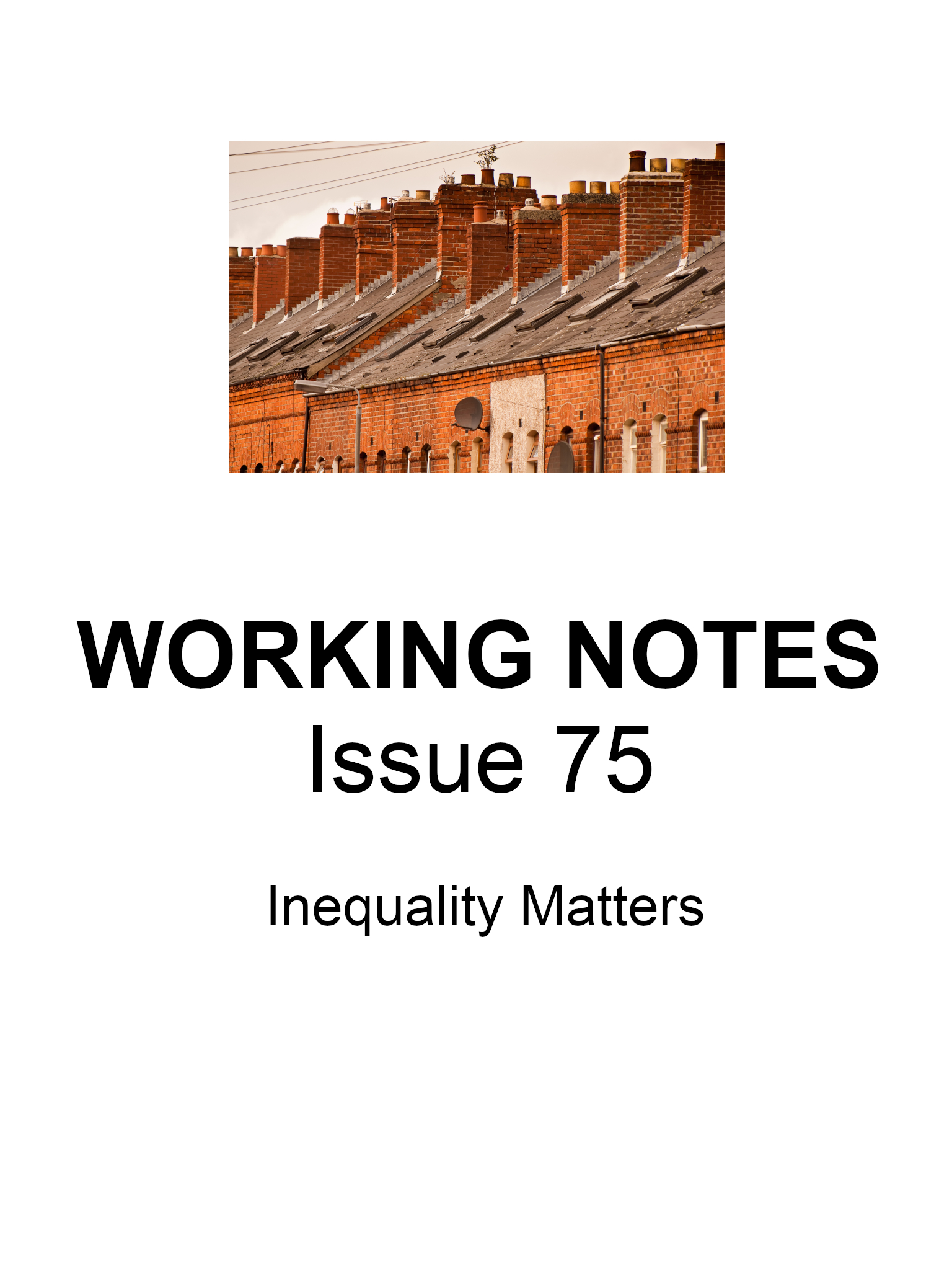 This issue of Working Notes looks at inequality – a  subject which has been the focus of increasing attention in the last few years, from sources as diverse as the Occupy movement and the OECD. The slogan of the former, ‘We are the 99%’, reflects the extreme concentration of wealth and incomes in the top 1% of the population in developed countries. Meanwhile, the latter acknowledges that: ‘Income inequality in OECD countries is at its highest level for the past half century. The average income of the richest 10% of the population is about nine times that of the poorest 10% across the OECD, up from seven times 25 years ago’. (www.oecd.org; emphasis in the original)

Included in this issue of Working Notes is an interview with Thomas Piketty, who, in his best-selling book, Capital in the Twenty-First Century, argues that the main driver of inequality is the tendency for the return on capital to exceed the rate of economic growth. A ‘drift’ towards inequality is therefore an in-built feature of capitalism, Piketty suggests. He argues that in order to prevent ever more extreme inequality from developing, governments at both national and international level must consider how taxation can be shaped to counter this tendency, and says there needs to be fresh thinking about the nature of progressive taxation in respect of both incomes and wealth and about the linkages between different forms of taxation.

Micheál Collins outlines the data regarding income distribution in Ireland between 2005 and 2012 (the latter being the most recent year for which results are available). He shows that despite the marked rise and then decline in the country’s total income over this period, spanning the final years of the boom through several years of recession, the ‘shape’ of distribution did not change significantly. Describing the overall picture of Ireland’s income distribution in these eight years as ‘stable but not so equal’, Micheál Collins shows that, in 2012, those in the bottom 10 per cent of the income distribution received just 3 per cent of all disposable income while those in the top 10 per cent received eight times this share (24 per cent). Moreover, he draws attention to the fact that there has been an increase in income poverty since the recession began and an even more significant increase in deprivation, as measured in terms of households lacking basic goods. He highlights also the fact that a significant percentage of people who are in employment are at risk of poverty, and argues that tackling inequality in earnings and the problem of low pay must be key features of policies to counter poverty.

As to the question of wealth in Ireland, Tom McDonnell shows that as a society we have accorded little importance to collating and analysing information to establish the total wealth owned by households and how this is distributed between different groups across society. Over the past forty years, studies on wealth in Ireland have been sporadic and limited in scope. Nonetheless, in every instance these studies have pointed to a highly unequal pattern of distribution, with some studies suggesting that the top 5 per cent of the population held 40 per cent or more of overall wealth. Tom McDonnell highlights the difficulty of obtaining accurate information on wealth and its distribution, since the group that is of critical importance in this process – the very wealthiest – often avoid inclusion in wealth studies, or even if they are included may not divulge the full extent of their wealth holdings.

In the final article in this issue, theologian Gerry O’Hanlon SJ explores the potential contribution of Catholic social teaching to reflection and debate on inequality. The core principles of this teaching, such as social solidarity, the importance of the common good, the universal destination of goods, and the preferential option for the poor, pose a challenge to economic and social systems that give rise to gross levels of inequality. Gerry O’Hanlon notes the significant level of attention given to the question of inequality in the document, The Joy of the Gospel, issued by Pope Francis in November 2013. In this, the Pope deplores the growing social divisions and human suffering created by an ‘economy of exclusion and inequality’. He makes clear that the response cannot be confined to individual acts of generosity but must involve ‘rejecting the absolute autonomy of markets and financial speculation and … attacking the structural causes of inequality’.