73: The Rights of Workers - Then and Now 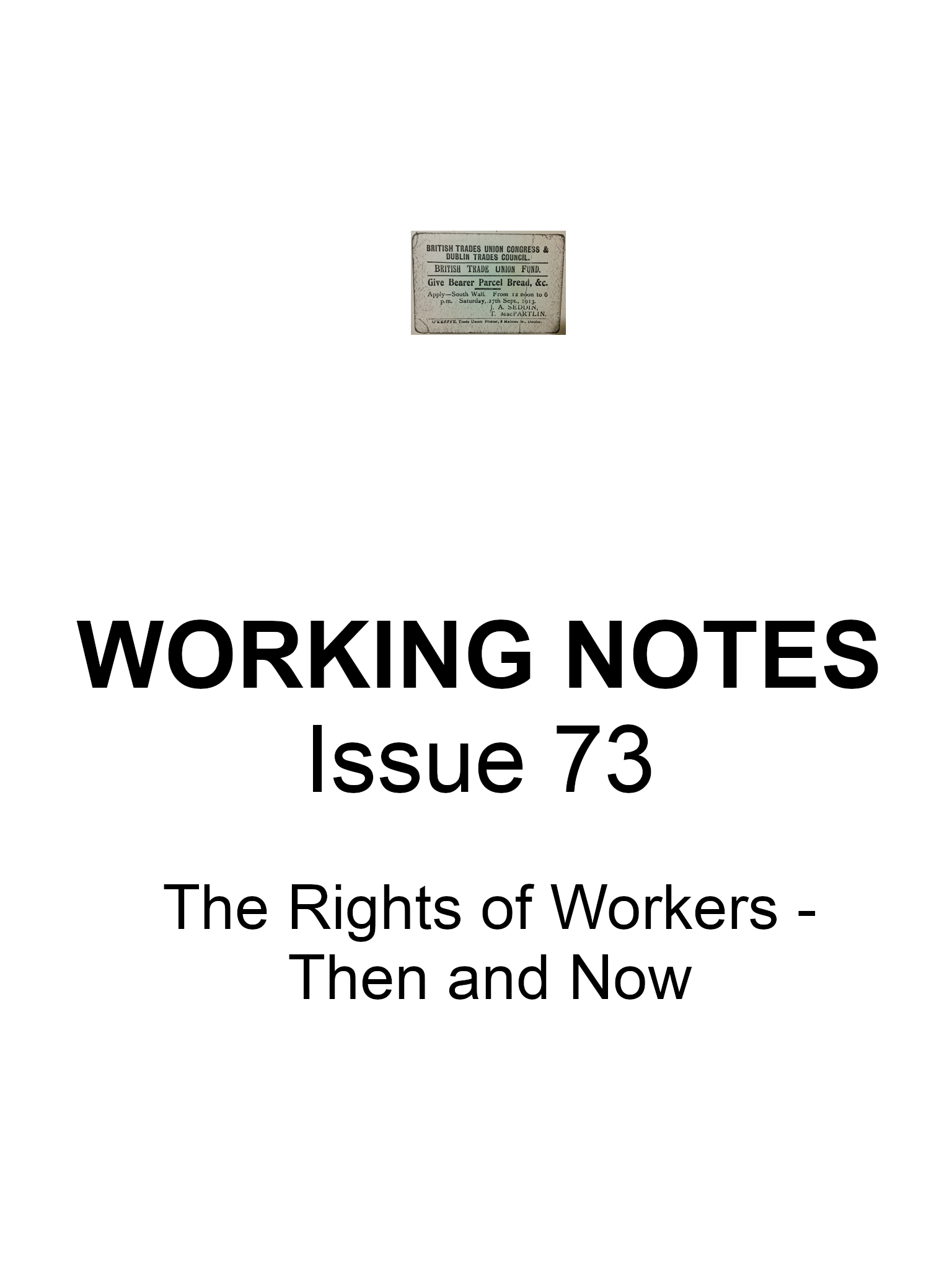 The goal of economic development that responds to essential human needs, respects the rights of workers to decent pay and conditions, and is sustainable in both economic and environmental terms, is the underlying theme of three of the articles in this issue of Working Notes.

In the opening article, Brendan Mac Partlin SJ explores the meaning of the Dublin Lockout of 1913 and its relevance to industrial relations in today’s globalised economy. He argues that the dispute was fundamentally about the denial to the Dublin workers of the right of freedom of association for the purposes of bettering their working conditions, in a context where huge numbers of people worked for poverty wages, had little or no security of employment and where there was no safety net of social welfare. He points out that the gains achieved in the decades after 1913, representing a ‘new deal’ for employees, have come under increasing threat since the 1970s, with the globalisation not just of economic activity but of a new form of laissez-faire capitalism. We now see the ‘old deal’ in post-modern dress, with the widespread return of insecure and low-paid employment. Brendan Mac Partlin argues that in our globalised economy the essential rights of workers, social protection and equity must also be globalised; achieving this is a significant challenge to the trade union movement of today and to the international agencies.

In the second article, Gerard Doyle and Tanya Lalor examine the potential of social enterprise to supply services not available in either the public or private sectors, to provide good quality employment and to contribute to economic regeneration at local level. They point out that already in Ireland there are 1,400 social enterprises providing 25,000 jobs, with an estimated potential to double employment in the sector by 2020, and they give examples of innovative social enterprise projects in the areas of renewable energy supply, care for older people in the community, and housing regeneration. The authors suggest that there is now a more favourable policy environment for social enterprise, with both the Irish Government and the EU displaying an increasing awareness of its potential contribution. However, a critical question remains: will the sector be given the structural and financial supports necessary to enable it to fulfil that potential?

The third contribution, by Gerry O’Hanlon SJ, is Part Two of an article exploring the need for a ‘redemption narrative’ from a theological perspective to provide hope as Ireland deals with fallout from its economic crash, and guide us towards a more balanced, just and sustainable form of economic development. This part of the article focuses on the socio-cultural, political and theological resources that might contribute to the process of developing a redemption narrative. Gerry O’Hanlon highlights the need for new thinking and dissenting voices prepared to challenge not just the pervasiveness of modern capitalism, with its blind faith in ‘the market’ and insistence on growth, but the widespread assumption that ‘there is no alternative’. He emphasises the need for a politics that is open to new thinking and can take on board the notion of the common good and its attendant values, such as equality, solidarity and fairness. He looks too at the particular contribution which theology can make, through asking searching questions about what is happening, by entering into dialogue with other disciplines, and by reminding us that in the midst of all our economic difficulties there are secure grounds for hope.

In the final article of this issue, Paul O’Mahoney explores the role which psychology and psychologists can play in bringing about much- needed improvements in prison conditions. This role, he says, goes far beyond the obvious, and of course important, task of providing a professional service to the great numbers of prisoners who suffer the effects of childhood deprivation, social disadvantage and mental illness. He suggests that it should extend to psychologists drawing on the insights of their discipline so as to highlight the inherently damaging nature of the closed, high-security prison and contribute to the devising of more constructive forms of imprisonment. In addition, he says, psychologists have a role in advocating for the minimal use of imprisonment and for action to address the social inequalities that lie behind much of the crime in our society.