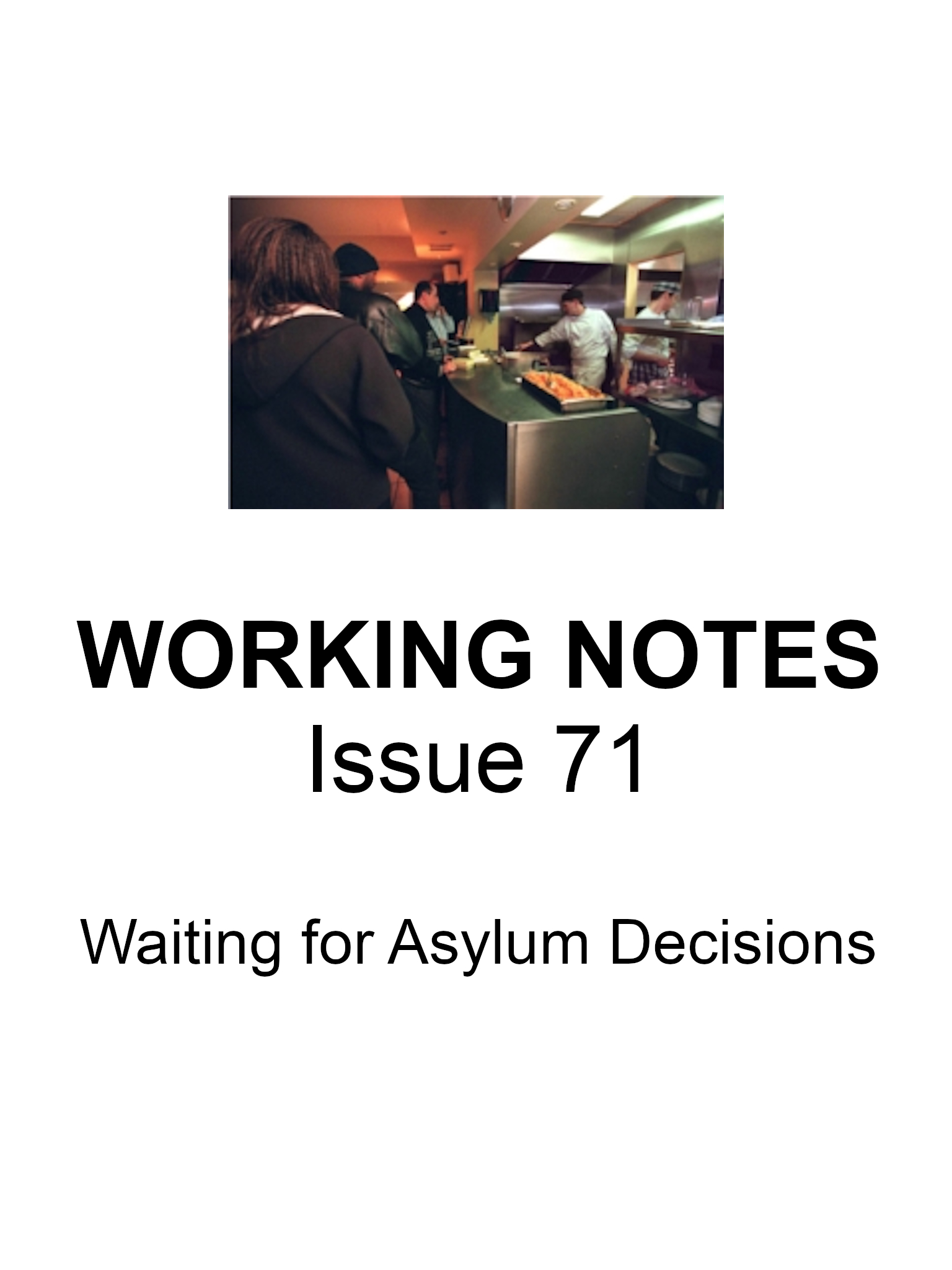 In the opening article in this issue of Working Notes, Eugene Quinn describes the difficultly of life within the direct provision accommodation system for applicants for asylum in Ireland – the restrictions of limited personal space, the impact of institutional living on families, and the boredom and loss of skills resulting from the ban on asylum applicants taking up employment. The impact of these various difficulties is all the greater, given that people may remain in the system for prolonged periods (the average length of stay is now over three and half years). Eugene Quinn says there is urgent need for legislation for a reformed asylum system and for additional resources for the courts to enable them to adjudicate more speedily on applications by asylum seekers for judicial reviews of decisions. There is also need to address the problems in direct provision itself, the most critical being the ban on working. He concludes that while a state has the right to control its borders, natural justice requires that a fair and transparent asylum process is provided and that applications within that system are processed and concluded within a reasonable period of time.

In the second article, Catherine Lynch writes that racism is a serious but under-reported problem in Ireland today: she points out that the findings of surveys, and the experience of NGOs, suggest a much higher incidence of the problem than is indicated by the number of ‘racially motivated incidents’ officially recorded by An Garda Síochána. She says that effective systems for recording and monitoring racist incidents are necessary not just to provide the possibility of redress for those affected, but to establish an evidence base for the development of appropriate legislation, policy and prevention strategies in relation to both racially motivated crime and discrimination in access to goods and services. She outlines how NGOs can play a vital role in the monitoring process and calls for leadership and political will to ensure that the issue of racism is taken seriously and effectively addressed.

Nicola Rooney writes on the role of the churches in regard to ‘ethical finance’. She says that the churches not only have a responsibility to show leadership in public discussion on the financial sector but, as holders of significant financial reserves and therefore participants in the financial system, they have a responsibility to address the issue of ethical investment. Nicola Rooney outlines the main findings of a study on ethical finance prepared by an inter-church group, the Church in Society Forum of the Irish-Inter Church Meeting. The study found that church leaders had undertaken a considerable amount of work in relation to ethical investment (by way of reflection and the establishment of policy frameworks, for example), yet had given little thought as to how their work on this issue could be communicated to congregations. The findings of the study suggest that the churches in Ireland, individually and in collaboration with one another, should be more vocal and active in relation to issues of ethical finance.

In the final article, ‘Restoring the Fabric of Irish Economic and Social Life – A Theological Reflection’, Gerry O’Hanlon SJ refers to Maureen Gaffney’s statement that people respond to major crises in two main ways – ‘by constructing redemption stories or contamination stories’. He suggests that, in the face of the current economic crisis, the development of a ‘redemption’ narrative could offer vision and hope, and help to galvanise our society towards effective action.

In this article, the first of a series, Gerry O’Hanlon points out that the development of a ‘redemption’ narrative necessarily involves a willingness to examine some fundamental assumptions we have about ourselves and about our economy and society. In relation to the current crisis, he suggests that questions need to be asked about three features, in particular, of the dominant economic model: the role of the market, especially the financial market, the increase in inequality in income and wealth, and the belief that economic growth is always ‘good’. He says that, arising out of the crisis, we have the opportunity ‘to imagine and move towards’ a more sustainable economic model, but warns that achieving the kind of change required will not be easy, since resistance will be strong, particularly from those who stand to lose most from a re-balancing of the status quo.