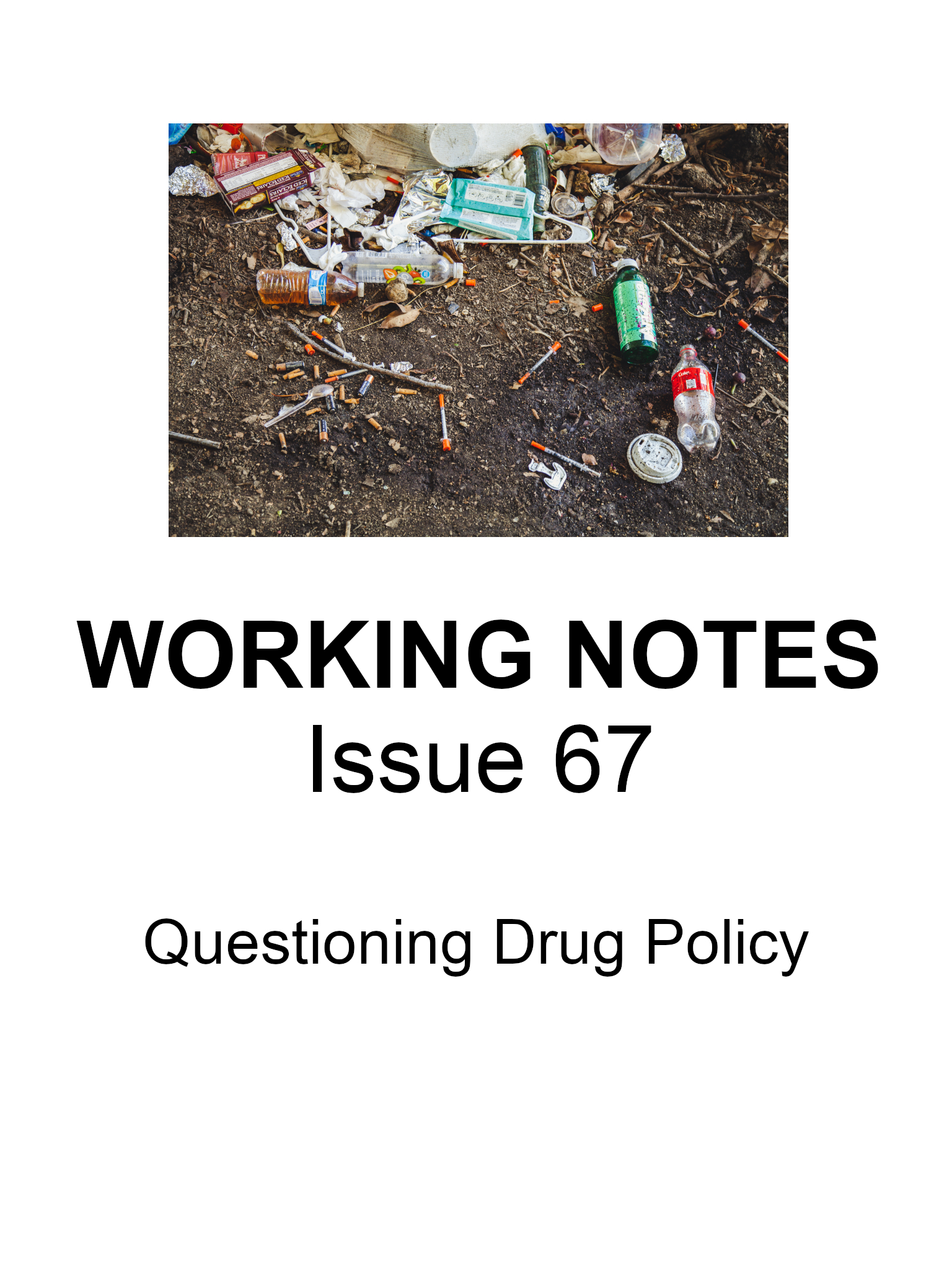 Two of the three articles in this issue of Working Notes deal with the distinct but not unrelated issues of drug policy and prison overcrowding; the third with the broader topic of the reform of public services generally.

In the opening article, Fr Peter McVerry SJ calls for a radical appraisal of current approaches to dealing with illegal drug use. Pointing out that ‘drug policy’ encompasses both policies to deal with the supply of drugs and policies to deal with demand, he says that addressing supply absorbs by far the greater share of public expenditure. Yet, despite successes by the authorities in intercepting supplies, the inflow of drugs continues, with powerful criminal gangs controlling this trade. Fr McVerry says there is need for a serious rethink of policy in relation to how the State can control the supply of drugs and suggests that the findings and recommendations of the Global Commission on Drug Policy, published in June 2011, provide some useful guidelines for the much-needed public and political debate on the issue.

In relation to policies to control demand, Fr McVerry highlights the importance of addressing demand among those who are habitual users or who are addicted to drugs. He emphasises the need for a comprehensive range of detoxification, rehabilitative and after-care services, and says that it is essential that these be accessible without undue delays. While the importance of all these elements has long since been recognised in official policy and strategy statements, provision falls far short of need, and existing services are endangered by current cutbacks in public funding.

Overcrowding is widely recognised to be a core problem of the Irish prison system, one which affects every aspect of prison life.This issue is addressed in an article by Patrick Hume SJ who notes that many Irish prisons are overcrowded even in terms of the most basic level of ‘bed capacity’ – simply the number of beds which can be fitted into a prison building. Moreover, he says it would appear that the prison authorities have now abandoned the principle that ‘one person per cell’ should be the norm.

Fr Hume shows that international human rights agreements provide only general guidance as to what constitutes ‘desirable’ cell capacity and that in any case the provisions of such agreements can be appealed to in Irish courts only if they have been explicitly made part of domestic law. He shows too that while judgments of the Irish courts have upheld the basic rights of prisoners it is clear that the courts are unwilling to meddle in the administration of the prison system by specifying the conditions under which prisoners may be detained. He concludes that there is limited scope for a legal route through the courts towards ensuring that our prisons provide adequate accommodation, and argues that there is need for an informed public to advocate strongly for the changes necessary to close the gap between the prison conditions to which we should be aspiring and the reality of the conditions now prevailing.

The economic crisis of the last few years has focused increased attention on the importance and urgency of reform of Irish public services. In the third article in this issue, Dr Fergus O’Ferrall points out that the outcomes of services are in fact ‘co-produced’ by users and providers and so it makes sense to ensure public participation in the design and implementation of public services. However, he says, too often services are based on ‘passive models of delivery and narrow understandings of solidarity’, with citizens being seen as dependants or clients. Dr O’Ferrall argues for a ‘human development and capability approach’ to public service reform, one which would see citizens as ‘active, creative and able to act on behalf of their aspirations’, and which would allow for ‘participation, public debate, democratic practice and empowerment’ in the framing and implementation of services. He suggests that a capability approach is particularly necessary in relation to the reform of our health services, pointing out that effectively addressing the key public health problems of our times – obesity, harmful alcohol consumption and socio-economic differentials in health – will depend not on spending ever-increasing sums on health services (even if that were possible) but on the active commitment of informed and engaged citizens.