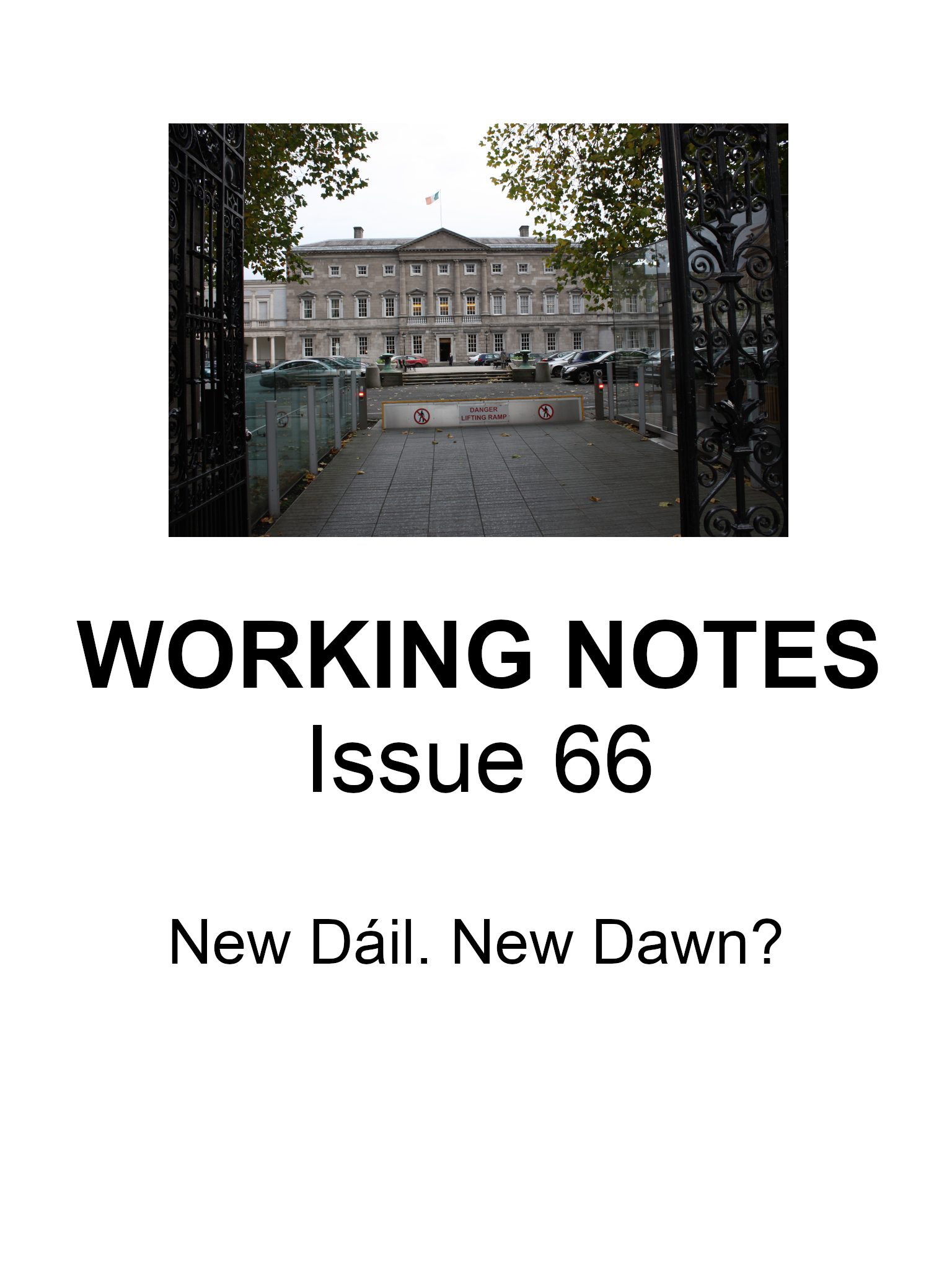 In a Statement issued prior to the General Election in February of this year, the Jesuit Centre for Faith and Justice noted that in public discussions in Ireland on how to address the economic crisis reference was frequently made, by politicians and commentators, to ‘the common good’, ‘solidarity’ and ‘sustainability’. The Statement said that while this was welcome, the reality was that the mere articulation of such values was in itself of little consequence, unless there was ‘a corresponding determination to take the decisions and measures necessary to give effect to these values’.

The Programme for Government of the new Fine Gael–Labour Party Government includes many references to values such as social solidarity and equality; indeed, at the outset, the Programme states that both parties in Government are ‘committed to forging a new Ireland that is built on fairness and equal citizenship’.

There is no doubt, however, that the Government faces an extremely difficult task in attempting to bring about such a society – while at the same time responding to what the Programme describes as our ‘unprecedented national economic emergency’. It will require deep commitment and resolve not just by Government but by the whole of Irish society if the promise to ‘modernise, renew and transform our country’ is to be fulfilled and if the following statement of intent in the Programme is to be realised: ‘By the end of our term in Government Ireland will be recognised as a modern, fair, socially inclusive and equal society supported by a productive and prosperous economy’.

This issue of Working Notes deals with a number of themes that will be key challenges over the lifetime of the new Dáil. In the opening article, P.J. Drudy suggests that ‘the pre-eminence of economic growth as a goal and the dominance of the market as a philosophy have served us badly’, and says that the broader concept of ‘development’, which would take into account factors such as education, health, employment opportunities, and equality, would provide a better measure of the progress of a society. He advocates the adoption of a human rights-based approach to legislative and policy development – pointing out that Ireland has already ratified a series of international human rights treaties covering economic and social rights, and has thereby committed itself to implementing their provisions in its policies, plans and budgets.

Ray Kinsella and Maurice Kinsella outline the origins and key features of the crisis in Irish banking and argue that this has to be seen primarily as an ethical crisis, one spawned within a relativistic and consumer-driven form of corporate capitalism, which excluded any understanding of the common good. They suggest that in responding to the crisis there cannot be a reliance solely on new legislation and regulation: the real challenge is ‘to embed a sense of ethics within organisational structures, incentives and relationships’ and bring about an alignment between commercial practice and the common good.

Eugene Quinn shows how major flaws in taxation policy during the economic boom contributed to the fiscal crisis which the country now faces. The erosion of the tax base, the reliance on volatile consumption and transaction taxes, and the notion of ‘spending it while we have it’ were all features of an approach whose unsustainability quickly became apparent once the downturn occurred. However, he says that, despite the severity of our fiscal problems, the crisis could be the opportunity for Ireland to adopt an approach to collecting and spending public money that is based on equity, sustainability and an appropriate balance between different forms of taxation.

In the final article, Bríd O’Brien highlights the scale of the unemployment crisis facing Ireland, with the number of people out of work having almost trebled since 2007. She argues that policy measures in relation to both social welfare payments, and the provision of training, education and work experience, must be able to offer unemployed people not only adequate supports in the short term but hope for the future, and says there is need for a comprehensive and integrated Jobs Strategy that could both address the immediate crisis and fully explore the possibilities in every sector of the economy for the creation of employment.