62: Who Will Pay for Recession? 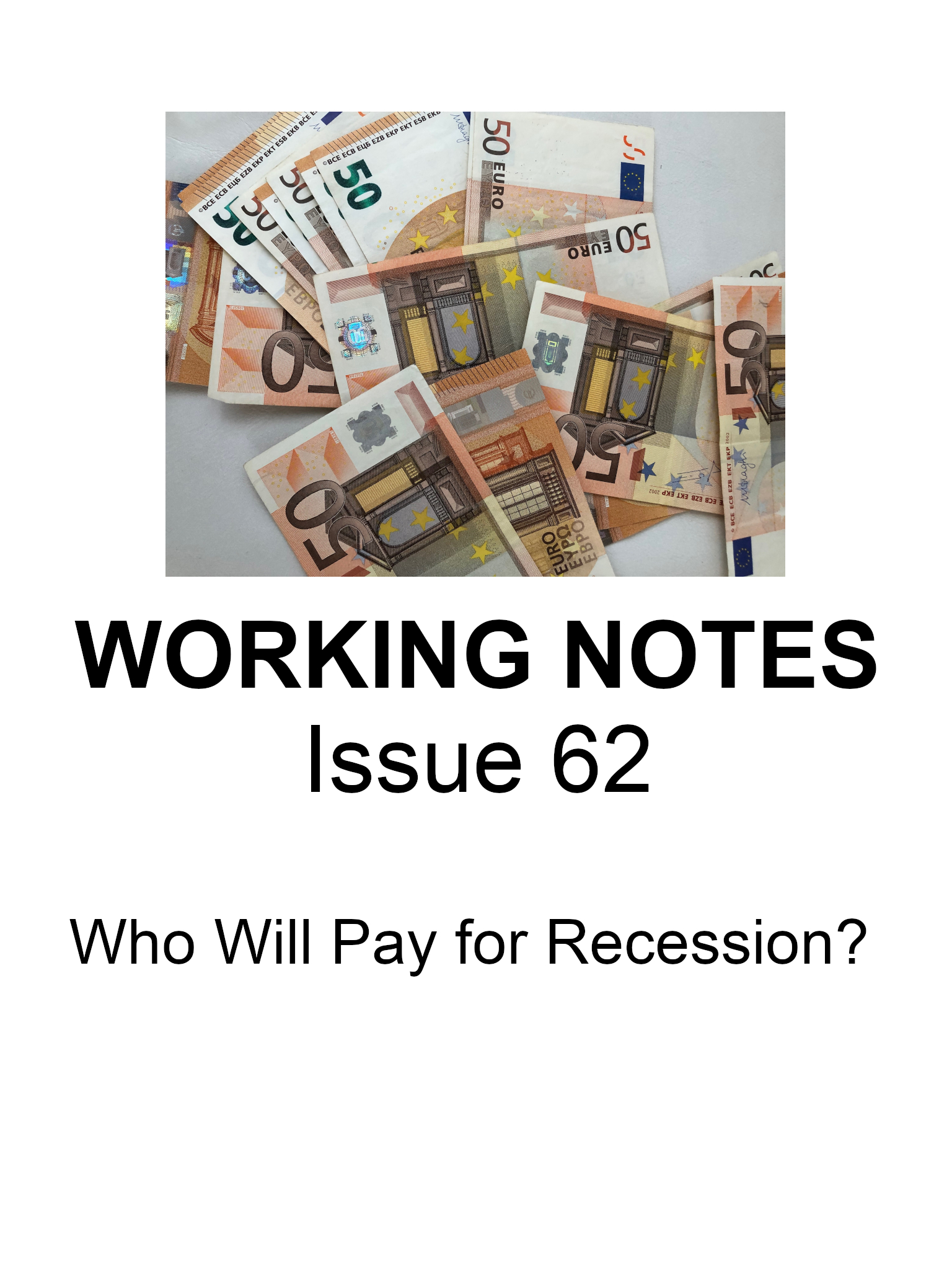 In a recent interview, the writer Iain Banks, expressing strong criticism of senior British politicians, said that they were ‘very good at standing up to the weak and poor, and utterly pathetic at standing up against the rich and powerful; they roll over every single time’ (The Guardian, 8 September 2009). As we in Ireland watch measures being unfolded to deal with the banking crisis and the deficit in the public finances, we too may have cause to wonder if our decision-makers, and those who influence them, favour an approach of being ‘strong with the weak’ and ‘weak with the strong’.

In the opening article of this issue of Working Notes, Peter McVerry SJ explores the very different realities experienced by those at the top and those at the bottom of Irish society in terms of income, employment, housing, education and health. He points out that most of the decisions are made by those at the top, and that the imbalance in the influence of different sectors is evident in the proposals being made to address the shortfall in the public finances. He points to the cumulative impact of proposed cuts in social welfare and support services, highlighting that it is the same people who will be hit by cuts in different areas of expenditure. He challenges the use of ‘social solidarity’ to mean that everyone should share the pain of addressing the crisis, and says that social solidarity means, rather, that those who can afford to make sacrifices willingly do so in order to protect those who cannot afford a drop in income or cuts in services.

In a reflection on the challenges facing the Catholic Church in the aftermath of the Ryan and other reports on child abuse, Aileen Walsh says that in addition to responding to the needs of those who were abused we must try to understand the forces that shaped the context within which abuse occurred. We must, in particular, examine the factors within the institutional Church itself – including the theology that predominated at the time, the attitudes to sexuality, and the question of how power was exercised by Church authorities internally as well as externally in interactions with the wider society and with the State.

Much has changed for the better in the Church over the past few decades, Aileen Walsh says; nonetheless, many institutional features remain unchanged. In particular, the implementation in practice of a collaborative approach to ministry has been extremely slow. The reports on abuse, she suggests, should become a catalyst for change and for a renewed commitment by the whole People of God to the task of proclaiming the Good News with integrity.

Questions regarding access to legal services form the theme of the remaining two articles in this issue. Elizabeth O’Rourke of the Jesuit Refugee Service Ireland highlights the significant gap between the number of asylum applicants in Ireland who are granted protection at the point of first decision and the number who are successful after all avenues of appeal have been accessed. A lack of adequate legal services at the early stages of the asylum process is widely considered to be an important factor contributing to this situation. She puts forward the case for ‘frontloading’ legal services – that is, making available adequate legal information, advice and representation at these early stages. Such a change in practice would, she says, result in a fairer and more efficient system, with benefits for both asylum seekers, who would be spared lengthy delays and the stress of navigating complex processes without adequate assistance, and for the asylum system itself in terms of financial savings and greater efficiency.

Patrick Hume SJ looks at pro bono legal work and shows that the long tradition of lawyers offering services without charge is still alive today and is being actively promoted in many countries and through international cooperation. He points out that although pro bono service is an established feature of the legal profession in Ireland, this country does not have a formally structured pro bono system.

He suggests that now may be an opportune time for Ireland’s legal professional bodies and legal education institutions to explore the possibilities for a more structured approach to pro bono, and he draws attention to the resource available in the experiences of other countries which have set up systems and initiatives to support and promote pro bono work.