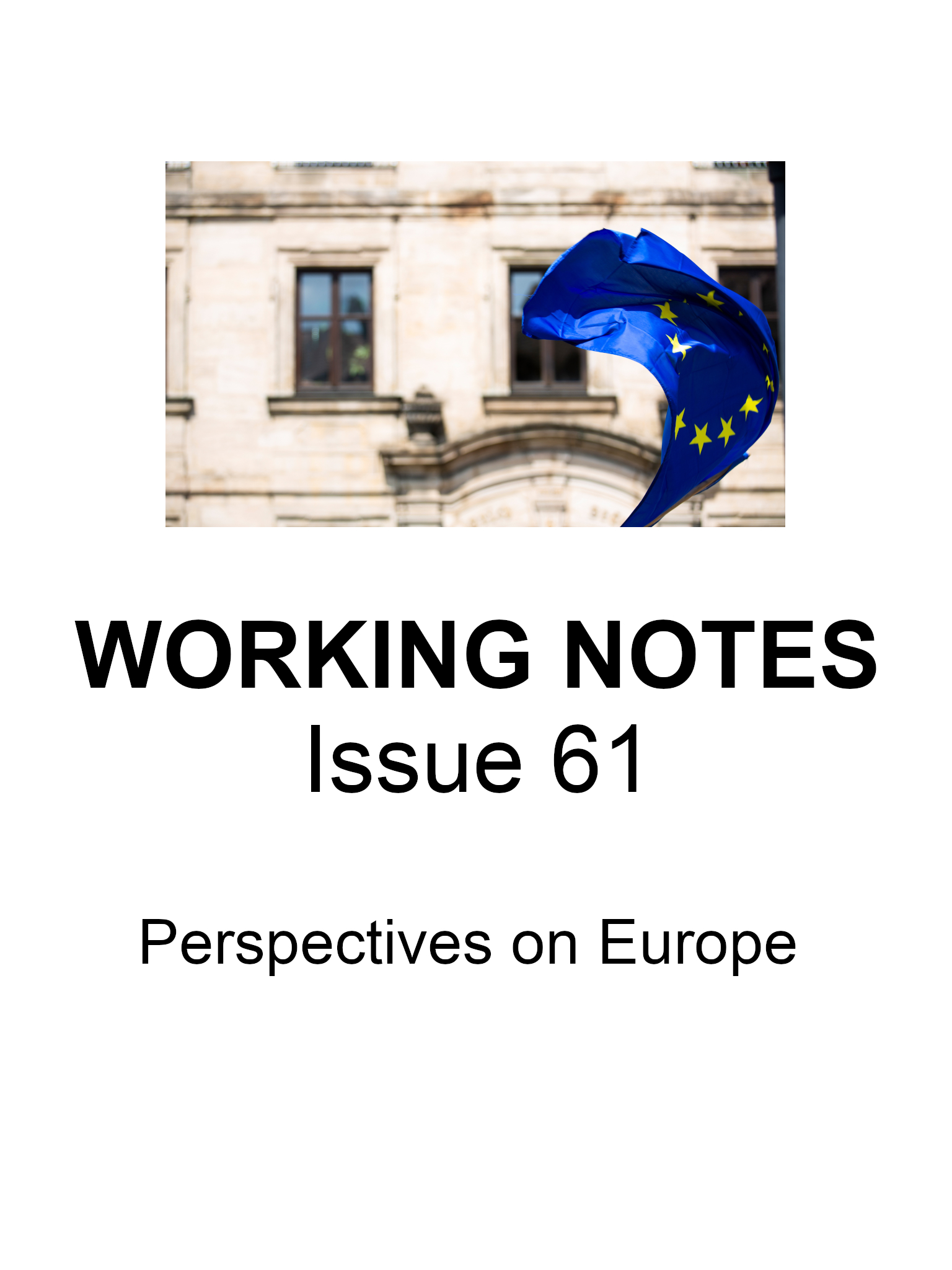 With the Referendum on the Lisbon Treaty just weeks away the build-up has been gathering momentum. Various civil society groups including those comprising some of our best known arts and sports celebrities, farmers, lawyers, ‘women for Europe’ have publicised their support for a Yes vote. Whatever the outcome of the vote on October 2nd, it seems reasonable to suppose that we know more than we did last time. Voting Yes or No cannot be reasonably based on the claimed ignorance of the content of the Treaty. This edition of Working Notes presents various perspectives on Europe, – not solely on the Treaty – with emphasis on some of the less publicised underlying values.

How do others see us? From Brussels, Frank Turner’s article comprises a report and a personal view. He gives a broad spectrum of political views and comments on the Treaty itself, accompanied by some very insightful observations on the Irish Process. He explores the ever-present tension between shared sovereignty and exclusive national sovereignty and its impact on an EU that seeks social justice. Political views and comments on the Irish Process are more astutely if gently stated than we are accustomed to and the more challenging for that. Is the fundamental game ‘my country versus the other 26’?

Brendan Mac Partlin’s article Libertas to Caritas includes a succinct discussion of the European Social Model, its values and how it has fared as the European Union has developed. Mac Partlin focuses on the social rights of people, particularly workers, and how these are delivered, or not, in the context of the Charter of Fundamental Rights and its interpretation by individual member states. He points out that the values of solidarity and gratuity, present in non-profit organisations, have a place also within economic activity generally.

Edmond Grace recalls the positive values of confidence, respect and a new liberty which membership of the European Union has brought to Ireland. As Director of a new Jesuit venture, Conversation on Democracy in Ireland, he brings an important awareness and realism about the problems of bureaucracy in modern politics and Government. He notes the need for new ways of interaction between the structures of the ‘iceberg’ of public administration and the citizens of the EU, suggesting that Ireland might take a lead in developing a process of reflection within our political structures whereby the administrative state might become more accountable.

Shared values strongly connect the social doctrine of the Catholic church and the treaties of the European Union. Cathy Molloy suggests that if the goal of human flourishing is to become real in a globalised world it will be achieved in union with others. Solidarity and subsidiarity, fundamental principles of both the social teaching and the European Treaties, including Lisbon, can inform policy at European and local level – increasingly important in matters that cannot be handled by countries acting alone such as climate change or trafficking in persons.

Is Europe a Continent out of touch with its roots? James Corkery, presents a clear account of Pope Benedict’s thinking on Europe understood as a cultural and historical concept rather than in geographical terms. The abandoning by Europe of its heritage of the mutual ordering of faith and reason, in favour of a perceived emancipation from its Christian moral traditions, has led to a constricting of reason and freedom. Rather than seeking a return to something that is past, he calls for the building together, as Europeans, of a culture based on our authentic heritage.

Whether or not the referendum on October 2nd is carried, the search for social justice and participation will continue. If EU citizens were to reconsider the specifically Christian aspects of its heritage, including solidarity and gratuity in economic activity, it could prove decisive for the shared sovereignty on which the European Union is built, and which will be needed to justly address the effects of the worldwide recession on those most severely harmed by it. What is certain is that the citizens of the EU who happen to be Irish will have had an unparalleled opportunity to consider the values at stake and to influence the effective working of the democratic structures of the Union which, although imperfect, mark a significant advance in the development of human cooperation.