59: In Recession who will be left Stranded? 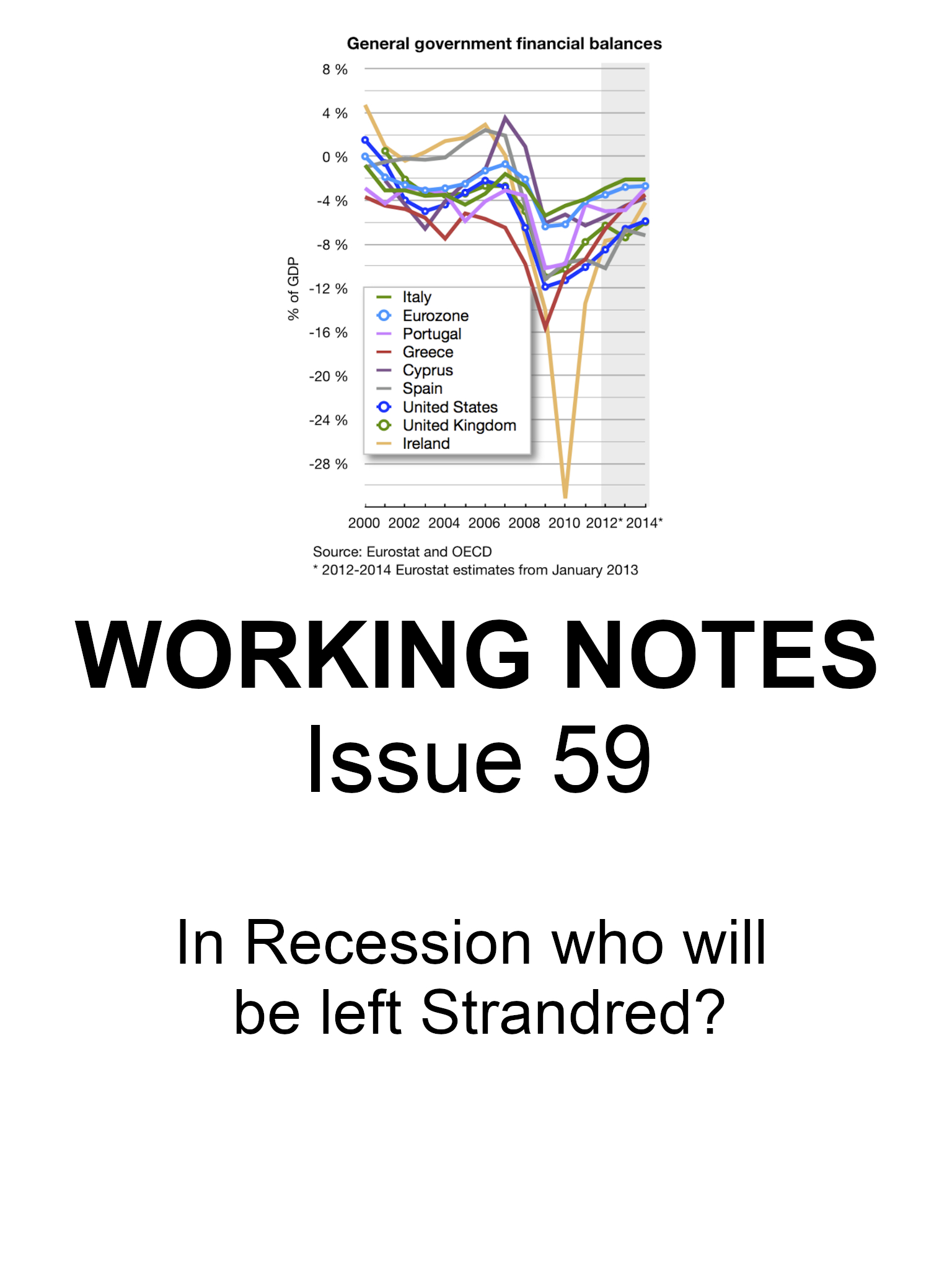 ‘The past is a foreign country: they do things differently there’, L.P. Hartley famously wrote. Right now in Ireland, however, it is the present that feels like a foreign country. This is a place where we must adjust our assumptions and expectations and learn, or relearn, the skills to enable us deal with an economic situation that is the reverse of the favourable one to which we had become so acclimatised.

The need to think seriously about the values that will guide us through these difficult times was the core theme of a Statement, ‘Justice in Recession?’, which was issued by the Jesuit Centre for Faith and Justice on 12 October 2008, and is reproduced as the opening article in this issue of Working Notes.

The Statement says that a continued adherence to some of the values that gained ascendancy during the economic boom will result in a very inequitable distribution of the pain that is inevitable as we try to turn around the decline in our economy. It argues that social solidarity, a concern for the common good and care for the people who are financially or otherwise vulnerable ought to underpin the policies and measures adopted in response to the current crisis.

This is a time, the Statement says, when we should be prepared to reassess the economic and political model which has guided our development for more than a decade. This model entailed a strong reliance on the free market as the means not just of generating economic growth but of providing an increasing share of social services and supports. Current economic and financial circumstances provide the impetus and opportunity to engage in debate about the possibility of devising a model that would provide fairer, more equal, and more sustainable outcomes.

One of the points made in ‘Justice in Recession?’ was that an early test of this society’s commitment to solidarity and fairness in these challenging times would be Budget 2009, on 14 October 2008.  However, elements of both the revenue-generating and expenditure sides of the Budget suggest that the many reassurances concerning the protection of vulnerable sections of our society were little more than rhetoric.

Taxation measures that do not differentiate on the basis of ability to pay (such as increases in indirect taxation), and the failure to seriously address the large number of tax avoidance schemes that allow the most well-off to (legitimately) reduce their tax liability, do not signal a strong sense of commitment to raising needed revenue in the fairest manner possible.

Restrictions on eligibility for and duration of Jobseekers Benefit will punish a group most seriously affected by the recession – those who lose their jobs. The halving (and later abolition) of Child Benefit for young people over eighteen will hit most severely those families on low incomes already struggling to maintain their children in education. Reductions in the education budget itself will erode many of the advances made in recent years in tackling disadvantage, reducing class size and meeting special needs. Direct and indirect increases in charges for health services represent the entrenching of a policy approach that sees health costs as something that must be borne by those already burdened by illness, rather than a shared responsibility.

At one level, Budget 2009 is drastically different from the budgets of the past decade. At a fundamental level, however, is it all that different? Many of those give-away budgets were exercises in the State generously supporting those who were already gaining hugely from the economic boom. However, the degree of redistribution to those on lower incomes, and those who needed support services, was limited. In an important sense, therefore, Budget 2009 represents continuity rather than a much-needed departure from the dominant approach of the past ten or so years.

In several places in his Budget speech, the Minister for Finance, Brian Lenihan TD, made reference to the on-going work of the Commission on Taxation, which he said will ‘inform our strategic thinking about the nature, incidence and burden of taxation for the next ten to twenty years’. In light of OECD data published in October 2008, which shows that Ireland remains among the most unequal of the thirty OECD countries in terms of income distribution, it is critically important that the recommendations of that Commission are shaped by principles that will promote equity.

It is to be hoped that the work of the Commission will foster a wider acceptance among both people and politicians that the imposition and collection of taxation should be based on the principles of fairness and concern for the common good. It is to be hoped also that its work will lead to a commitment to ensuring that the role of taxation in facilitating enterprise and initiative will be interpreted in a much broader way than it has been heretofore. This dimension of taxation ought to be concerned with releasing the initiative and enterprise of all people, not just a select few who are in the position to stake their claim most strongly. This has all too often been the case, and has resulted in a situation where the redistribution that is the very essence of a taxation system becomes redistribution to the better-off.

The framing of legislation and the devising of policy are tasks of government that must go on in good times and bad: these tasks are the core theme of the remaining four articles in this issue of Working Notes.

In an analysis of the Immigration, Residence and Protection Bill 2008, Eugene Quinn, Director of the Jesuit Refugee Service (JRS) Ireland, sets the Bill’s provisions on asylum and protection in the wider context of international migration from the poorer to the richer parts of the world and in the context also of trends in asylum policy within the EU. He highlights features of the proposed legislation (for example, in relation to detention and humanitarian leave to remain) which JRS Ireland believes should be amended as the Bill makes its way through the Oireachtas.

Over the past decade, more than 5,000 unaccompanied children from outside the country have come to the attention of the authorities in Ireland. Maria Corbett examines the response of the State’s asylum and child care systems to the needs of these children. She highlights the fact that despite recent improvements, the quality of residential care provided for those separated children who are not reunited with their families falls far below that available to other children in the care of the State. There exists, in effect, a two-tier system of care. In this and other respects, she says, Ireland is failing to meet its obligations to separated children arising under international legislation and in particular the UN Convention on the Rights of the Child.

The consequences of Ireland’s failure to ensure adequate legislative protection for temporary agency workers – a group which grew rapidly during the economic boom – is the subject of an article by Brendan MacPartlin SJ. He draws attention to the vulnerability to exploitation of this group and the danger that the use of agency workers can result in a race to the bottom in terms of pay and conditions for workers in some sectors of the economy. The fact that the EU has now reached political agreement on a long-delayed Directive on Agency Work means that Ireland will soon be faced with the task of framing legislation to implement the Directive. This provides an opportunity to finally address the serious deficiencies in this area of Irish employment legislation – but, asks Brendan MacPartlin, will there be attempts to water down the impact of the Directive in the process of transposing it into Irish law?

In the final article, Daragh McGreal and Tony O’Riordan SJ argue that current plans to double the number of prison places for women are not supported by statistics on the crimes for which women are convicted. In an analysis of the data on convictions against women, the authors show that only a minority of the offences for which women are convicted are at the serious end of the scale. And in analysis of statistics on the imprisonment of women, they show that detention on remand, detention under immigration legislation, and short prison sentences for relatively minor crimes, are the main purposes for which the two prisons for women in Ireland are currently used. There are strong grounds, the authors conclude, for questioning the extent to which imprisonment – an expensive and potentially damaging option – is used to detain and punish women and certainly for questioning any plans to increase the number of prison places for women.