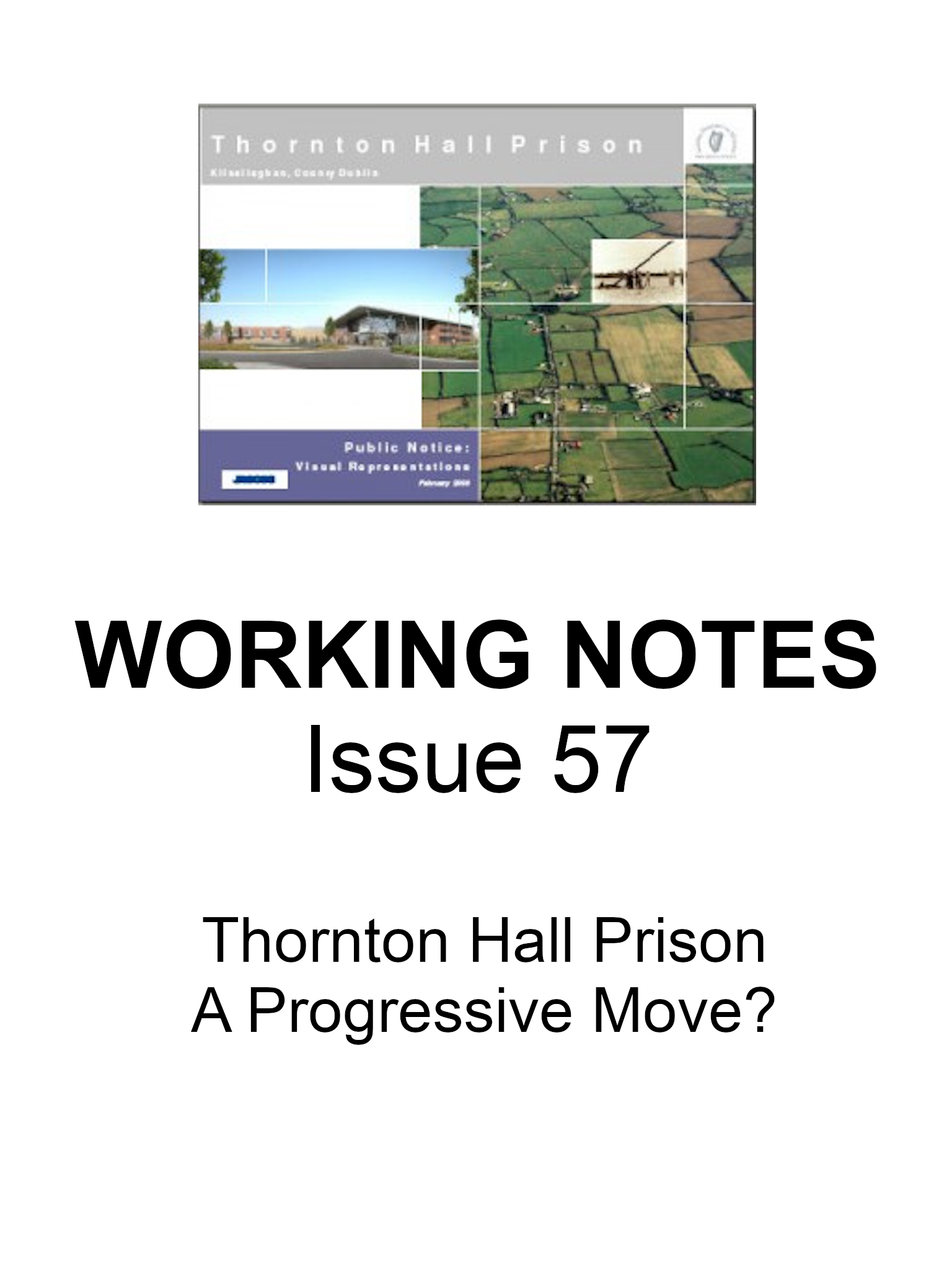 In February 2008, the report on the Environmental Impact Assessment (EIA) of the proposed Thornton Hall prison complex was published. The scope of the Assessment did not extend to analysing in depth the impact of Thornton Hall on the prisoners who will be detained there. Yet the study’s Non Technical Summary confidently declared that: The key benefit of the Development from a socio-economic point of view will be the significant improvement of the prison population’s general welfare. While the new complex may mean improved physical conditions for those moved from the inadequate, out-of-date and overcrowded facilities in Mountjoy male prison, a whole range of concerns about Thornton Hall should cause us to question the extent to which it can be considered a progressive development in Irish public policy.

Some of these concerns are the subject of articles in this issue of Working Notes. One is the location of the new complex at a significant distance from Dublin city centre. A number of our contributors draw attention to how the location of Thornton Hall will pose considerable difficulties for families wishing to visit those detained there, threatening the maintenance of family ties, which are widely recognised as critical to rehabilitation and reintegration.

A third concern is the planned relocation of the Dóchas Centre, the country’s main prison for women, and the doubling of the number of places provided. The relocation is proposed despite the fact that the Centre was opened less than ten years ago, is housed in a modern, well-designed building, and is widely regarded as having an enlightened regime. The increase in places is proposed despite an absence of any published analysis of the extent to which imprisonment in a closed prison is actually needed in the case of women.
The proposed increase in the size of the women’s prison reflects the more general increase in prison places planned for the Thornton Hall development. The EIA confirmed that the new prison would provide accommodation for 1,400 – even though the current total average number of prisoners held in the Mountjoy complex, which Thornton Hall is to replace, is 860. However, the EIA acknowledged that the number in Thornton Hall could be as high as 2,200.

What is the basis for such a significant increase in prison places? It appears as if the authorities have simply projected into the future a continuation of the upward trend in prisoner numbers of the past fifteen years. Questions as to whether we over-use imprisonment and under-use alternative penalties in response to crime – questions that are particularly timely in the context of plans to build a new prison – have not received either the public or political attention they merit.

Unexamined also has been the issue of the sheer size of the prison complex planned. There is a substantial body of opinion that smaller prisons offer a better chance of creating regimes, and relationships between staff and inmates, that are more conducive to rehabilitative efforts. Yet in the absence of debate on the matter we are planning a prison substantially larger than any previously built in the history of the State.

Before we go down the road of building a prison of the scale envisaged, and committing ourselves to the capital and current expenditure that this will entail, there should be a rigorous public examination of the full range of issues involved. The opportunity that is now available to comment on the EIA should be followed by an open and extensive public consultation on all aspects of the Thornton Hall development.

Over its lifetime, the new complex will serve to constrain the movement of the thousands of people who will be detained there. However, there is a grave danger that its existence will also serve to constrain the development of more enlightened approaches to both prison policy and forensic mental health services.