51: Refugees and Asylum Seekers - No to the Silence of Indifference! 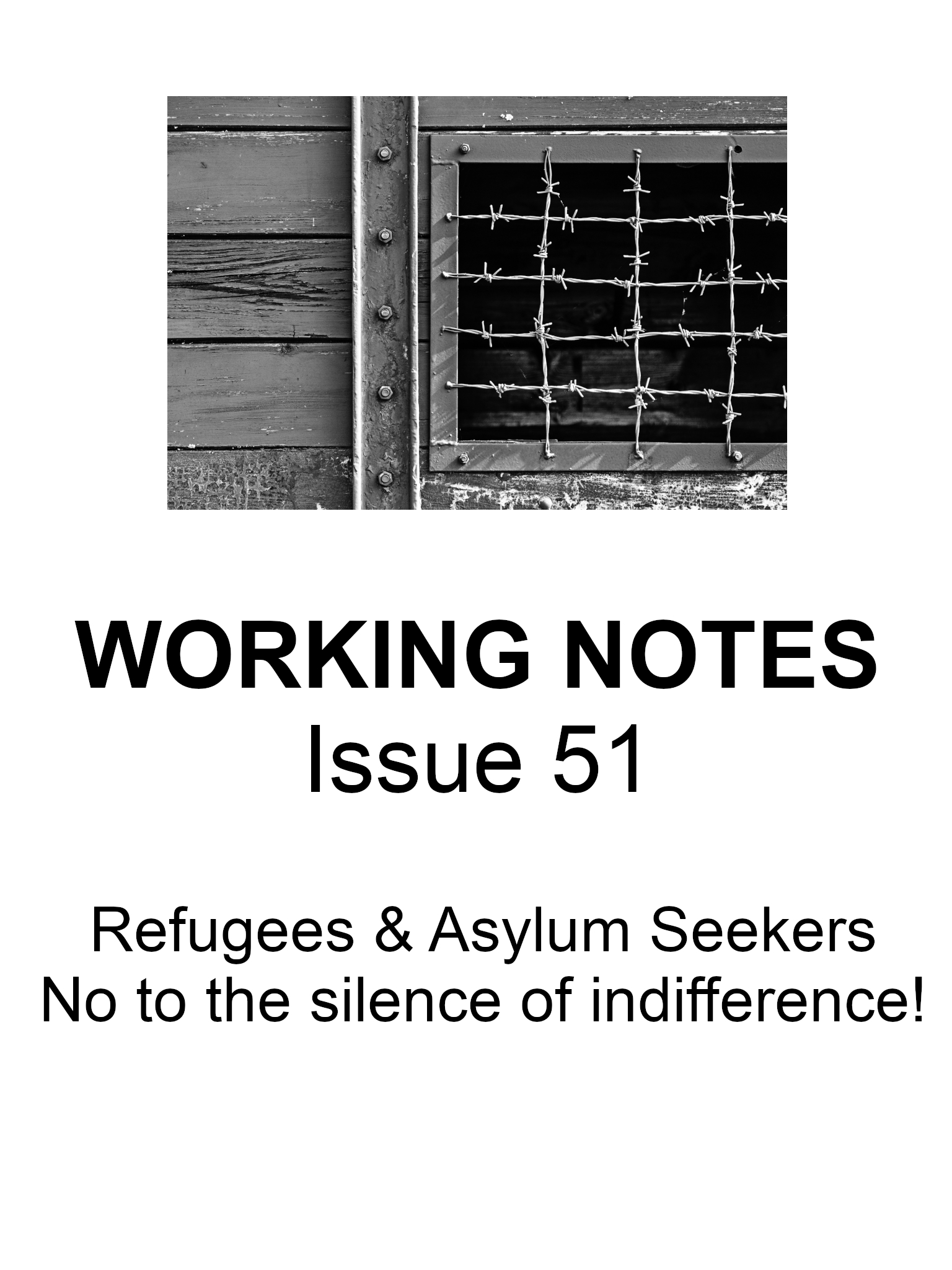 This issue of Working Notes commemorates the twenty-fifth anniversary of the establishment of the Jesuit Refugee Service (JRS). The mission of JRS is ‘to accompany, advocate and serve’ refugees and displaced persons across the world. The Jesuit Centre for Faith and Justice works closely with JRS Ireland in a joint integration project, Community Links, funded by the European Refugee Fund, and in public advocacy and lobbying on behalf of refugees and asylum seekers in relevant areas of policy.

A common concern expressed in all the articles in this issue of Working Notes is that countries are adopting increasingly restrictive asylum policies and practices and there is a consequent erosion of the rights of asylum seekers. In his article, John Dardis SJ, Provincial of the Irish Jesuits and former Director of JRS Europe, points to the danger that the particular needs of refugees and asylum seekers will be eclipsed by a focus in public policy and debate on more general immigration issues.

The increase in the use and duration of detention in EU countries is highlighted in the article, “To Detain or Not to Detain?”. In 2004, JRS Europe launched a campaign to raise awareness of conditions in detention centres across Europe and of the absence of safeguards for third country nationals who are detained. In September 2005, following a request from JRS, four Irish MEPs visited Cloverhill Prison to assess the situation of foreign nationals detained under immigraton legislation. Their report on the visit is published for the first time here. While the MEP visits to places of detention across Europe are extremely valuable in highlighting the current conditions of detention, JRS challenges strongly the need to detain asylum-seekers at all. It argues that detention should be considered only when an application for asylum has been rejected, all avenues of appeal exhausted, and a person is to be deported. Concerns about national security or alleged criminal activity on the part of an asylum-seeker should be dealt with through the criminal justice system, with the usual due process guarantees.

Deportation or removal procedures are highly controversial and emotive. In her article on deportation, Sr Joan Roddy says that in general removal procedures do not take into account the long-term fate of the people deported. She argues that it is not enough that states abide by a strict legalistic interpretation of the Geneva Convention that they must not return people to a situation of persecution. Rather, states have a broader responsibility: humanitarian considerations require that ensuring the protection of the person’s social and economic wellbeing should be a central consideration in making decisions regarding deportation.

Catholic Social Teaching has much to say on the Christian response to the plight of refugees worldwide. As Cathy Molloy points out, the Christian call to solidarity should find expression in our individual and collective actions to address the needs of asylum-seekers and refugees. Church teaching highlights the need to tackle the gross level of global inequality which is the root cause of many of the factors, such as political unrest, violent conflict, and extreme deprivation, that result in people leaving their own country to seek asylum.

Finally, for any readers who might wish to become actively involved in addressing the issues raised in these various articles of Working Notes, here are two suggestions. Firstly, you might consider supporting the JRS campaign for the establishment of a Europe-wide body to monitor conditions in places of detention – for example, by writing to your local TD or MEP. Secondly, the JRS Community Links Project, which aims to facilitate the integration of refugees in the Dublin 1 area, has numerous volunteering opportunities. If you are interested, please contact Ruth Diaz Ufano, Project Co-ordinator, at 01 806 9899 or by email at [email protected]