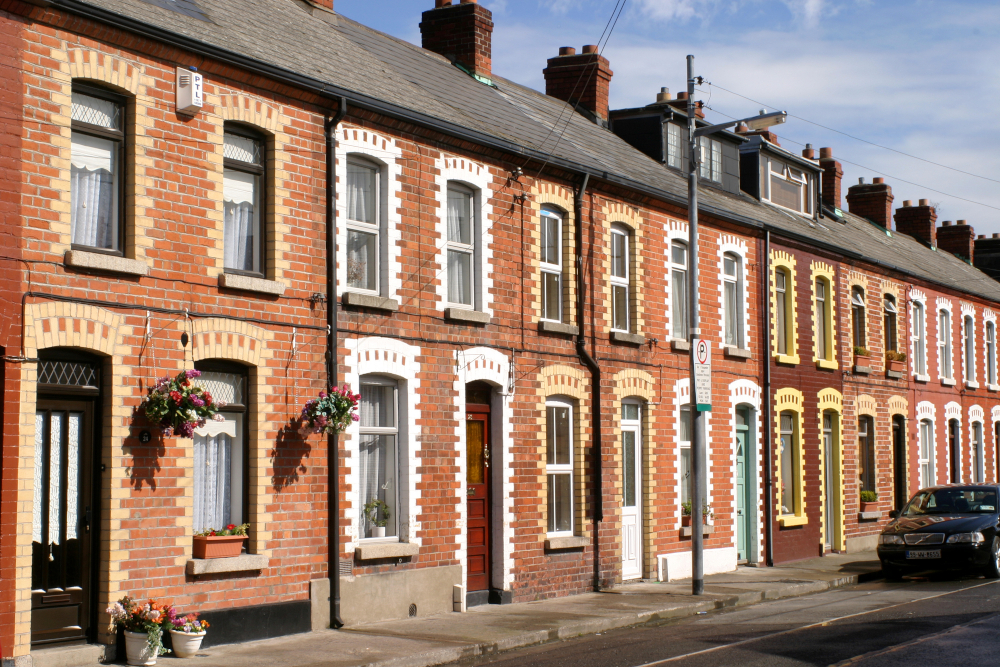 We do not know the distribution of household wealth in Ireland. The reason is straightforward. We do not yet have sufficiently high-quality data usable for distributional analysis – the type of analysis that would allow us to know what groups within society own what share of wealth. We cannot even be certain about aggregate net wealth in Ireland or of the composition of wealth by asset type.

Household balance sheet data, such as quarterly accounts data, is of minimal use for distributional analysis as it provides only aggregate data and excludes certain types of asset. On the other hand, survey data contain systemic biases due to the undervaluation and/or omission of certain asset types – for example, financial and personal assets.

Voluntary surveys achieve a poor response rate. The very wealthy are likely to be under-represented due to non-response, while those who do respond are likely to undervalue their wealth. Household surveys are therefore unlikely to be representative of the circumstances of the very wealthy.1 In practice, this means surveys such as the European Central Bank’s Eurosystem Household Finance and Consumption Survey (HFCS) will tend to underestimate the relative wealth of the very wealthy and to overestimate the share of gross assets represented by ‘real assets’. (The term ‘real assets’ refers to physical assets, such as agricultural land, residential housing and commercial real estate.) Even so, the news that the Central Statistics Office (CSO) is currently conducting such a survey in Ireland is welcome and long overdue.

Studies on Wealth in Ireland

Data from inheritance tax and estate duty have sometimes been used as a source of information, albeit limited, on wealth holdings and wealth distribution. Patrick Lyons, using estate duty data in 1971, found that per capita wealth in Ireland in 1966 was £676 (or £1,130 per adult) and that total wealth was £1.948 billion.2 He also estimated that the top 5 per cent of the adult population held 72 per cent of household wealth.

However, the estate duty method is likely to underestimate wealth and the estimates by Lyons were criticised on a number of grounds. There may have been a systemic underestimation of agricultural assets, making the overall estimate for wealth too low. The estate duty approach is also problematic because it excludes large numbers of people who die leaving small estates which do not come to the attention of the tax authorities. Certain types of property may also be excluded from estate duty, while other types of property may be over-valued or under-valued. Subsequent research reduced the estimated share of the top 5 per cent of wealth holders to 70 per cent or even 57 per cent of total wealth, but obviously these revised estimates would still represent a high degree of wealth inequality.

Bank of Ireland (BOI) and Credit Suisse have published more recent estimates of wealth and wealth distribution in Ireland.

According to a BOI report published in 2007, net household wealth in 2006 was €804 billion (€196,000 per capita), and the gross assets of Irish households were worth €965 billion.4 Of this total, €671 billion was in the form of residential property and €24 billion was commercial property. Deposits were valued at €92 billion, pension funds at €71 billion, and business equity at €50 billion.

The Credit Suisse report brings us into the post financial crash environment.5 It estimates that in 2011 the average net wealth per adult in Ireland was $181,000 (€126,000) and that the median wealth was $100,000 (€69,000). The value of real assets was estimated at €336 billion, financial assets at €302 billion, and liabilities/debt at €210 billion. The Credit Suisse report therefore places net household wealth in 2011 at approximately €428 billion. The report does not decompose either real assets or financial assets by type.

Regarding the distribution of wealth, the Credit Suisse report estimates that the top 1 per cent of the population held 28.1 per cent of household wealth in 2011, and that the top 5 per cent held 46.8 per cent of household net wealth. The estimated wealth distributions for both the Bank of Ireland report and the Credit Suisse report should be treated with a degree of caution as there are issues regarding data sources and the lack of inclusion of certain asset types. Even so, the results suggest a highly unequal distribution of wealth.

The Central Bank of Ireland’s Quarterly Financial Accounts6 includes data on household net worth.7 Household net worth in the first quarter of 2014 was estimated at €508.5 billion or €110,312 per capita.

The Quarterly Financial Accounts also show that household debt in the first quarter of 2014 stood at €164.3 billion or €35,694 per capita. Census 2011 reports an average household size of 2.73. This suggests that in Ireland there is a mean net worth per household of approximately €301,152. Unfortunately, this data cannot provide a picture of the actual distribution of wealth as it only looks at household wealth in aggregate. It does, however, illustrate that Ireland remains a wealthy country even after the ending of the Celtic Tiger era.

The Central Statistics Office (CSO) began publishing Institutional Sector Accounts in October 2011.8 These include data relevant to looking at one aspect of wealth-holding in Ireland, namely financial wealth, but do not cover ‘real assets’. The CSO Accounts provide information from 2002 onwards for the financial assets and liabilities of the household sector (see Table 1, p.10). The household sector was a net borrower up to the end of 2008, by which time borrowing had peaked at €212.8 billion. Irish households became net lenders from 2009 onwards. 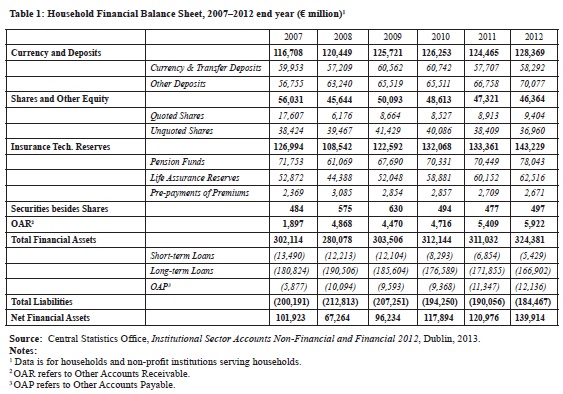 Much of the dynamics of net wealth is driven by capital gains and losses on real and financial assets rather than by the active accumulation of savings by households. Irish households have suffered large declines in net wealth since 2006, reflecting the dramatic deterioration in the value of housing assets and the exposure of Irish households to the housing market. By the fourth quarter of 2010, household net wealth had fallen close to its level in the third quarter of 2003. The general decline in the value of real and financial assets explains almost all of the fall in net wealth during this period. This fall was nearly identical to the fall in the value of the housing stock.

However, a 2012 study of the impact of the financial crisis found that, despite their collapse in value, housing assets still represented just over three-quarters of household net worth in Ireland in 2010.10 The study also showed the net worth of Irish households as a percentage of disposable income fell by a massive 164 percentage points between 2007 and 2010 – from 723 per cent to 559 per cent. This was the largest decline in net worth of fourteen countries studied.11Ireland also had the second largest percentage decrease in net financial wealth over the period 2007 to 2010.

The euro system Household Finance and Consumption Survey (HFCS)12 is the most comprehensive dataset available for household level net wealth,13 wealth composition, and wealth distribution in the euro area. Ireland and Estonia were not included in the ‘first wave’ of this survey which assembled data from every other euro area Member State for the year 2010. The results of this first wave of the survey were published in 2013. 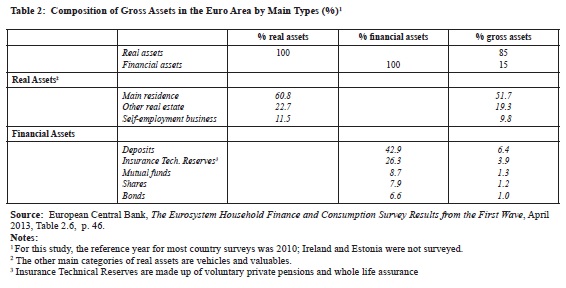 Components of wealth: Data from the HFCS suggests real assets make up almost 85 per cent of the value of assets in the euro area (see Table 2, p. 11).14  For homeowners, the dominant components of net wealth appear to be housing assets and associated debts such as mortgages, whereas financial assets and liabilities (excluding mortgages) have only limited impact on net wealth. However, this 85 per cent figure is probably a gross overestimation of the relative weight of real assets in total assets because financial assets are much less likely to be disclosed by survey respondents. For instance, and in contrast to the data from the HFCS, a cross country analysis of data on wealth-holding in the year 2000 found that for most countries non-financial assets accounted for between 40 per cent and 60 per cent of total assets.15 This may suggest the HFCS suffers from significant biases related to the under-valuation and/or non-disclosure of financial assets. The HFCS also fails to cover public and occupational pensions which in some countries may be quite substantial as a proportion of gross assets.

Mutual funds, bonds and publicly traded shares combined make up almost one-third (29.6 per cent) of the financial portfolio of the wealthiest group. This is significantly higher than the figure for any other group: it is, for example, twice the figure for the second wealthiest group, for whom mutual funds, bonds and shares represent just 14.8 of financial assets. The relative importance of such assets is likely to be even more pronounced for the wealthiest 1 per cent of households.

Wealth distribution: The distribution of wealth within a country is shaped by a range of institutional factors including the country’s economic history; its present economic structure; its sectoral composition of home ownership; its tax policy; its pension policy, and its demographics.

Applying the HFCS Findings to Ireland

What might be the outcome if the findings on the distribution of wealth from the first wave of the HFCS were to be applied to Ireland – which was not, of course, one of the countries included in the survey?

As already noted, the Central Bank’s Financial Accounts give, as an estimate, a figure of €508.5 billion for the ‘net household worth’ in Ireland in the first quarter of 2014. In this estimate, household net worth is calculated as the sum of the household sector’s housing and financial assets minus its liabilities.

Estimates of the percentage of wealth held by the top 5 per cent have varied considerably between studies (from, for example, 28 per cent to over 40 per cent) – as have estimates of the share held by the top 1 per cent (from 10 per cent to over 28 per cent). Such variations reflect differences and limitations in the methodologies employed. But the overall message is clear: wealth-holding is highly concentrated in Ireland, as it is in other countries of the euro area. The obverse of the concentration of wealth among a minority is that a significant part of the population has little or no wealth.

In addition, studies on wealth indicate that the composition of the assets held by the top 10 per cent is likely to be quite different from that of the population overall, while the asset mix of the top 1 per cent will be different again. For wealthier cohorts, financial assets tend to represent a larger component of their overall assets. This is significant not only in terms of the actual distribution of wealth but in so far as it has a bearing on the extent to which the distribution of wealth can be fully and accurately assessed since financial assets are much more susceptible to non-disclosure than real assets.

2. Patrick M. Lyons, ‘The Distribution of Personal Wealth by County in Ireland, 1966’, Journal of the Statistical and Social Inquiry Society of Ireland, 22(5), 1972.

3. Brian Nolan, The Wealth of Irish Households: What Can we Learn from Survey Data?, Dublin: Combat Poverty Agency, 1991.

7. The Central Bank calculates household net worth as the sum of the household sector’s housing and financial assets minus their liabilities.

9. Insurance Technical Reserves are made up of net equity in pension funds and life assurance reserves.

14.  The HFCS classifies self-employment businesses, where at least one member of a household works as self-employed or has an active role in running the business, as real assets.

17.  The first results for Ireland are expected to be published in late 2014.