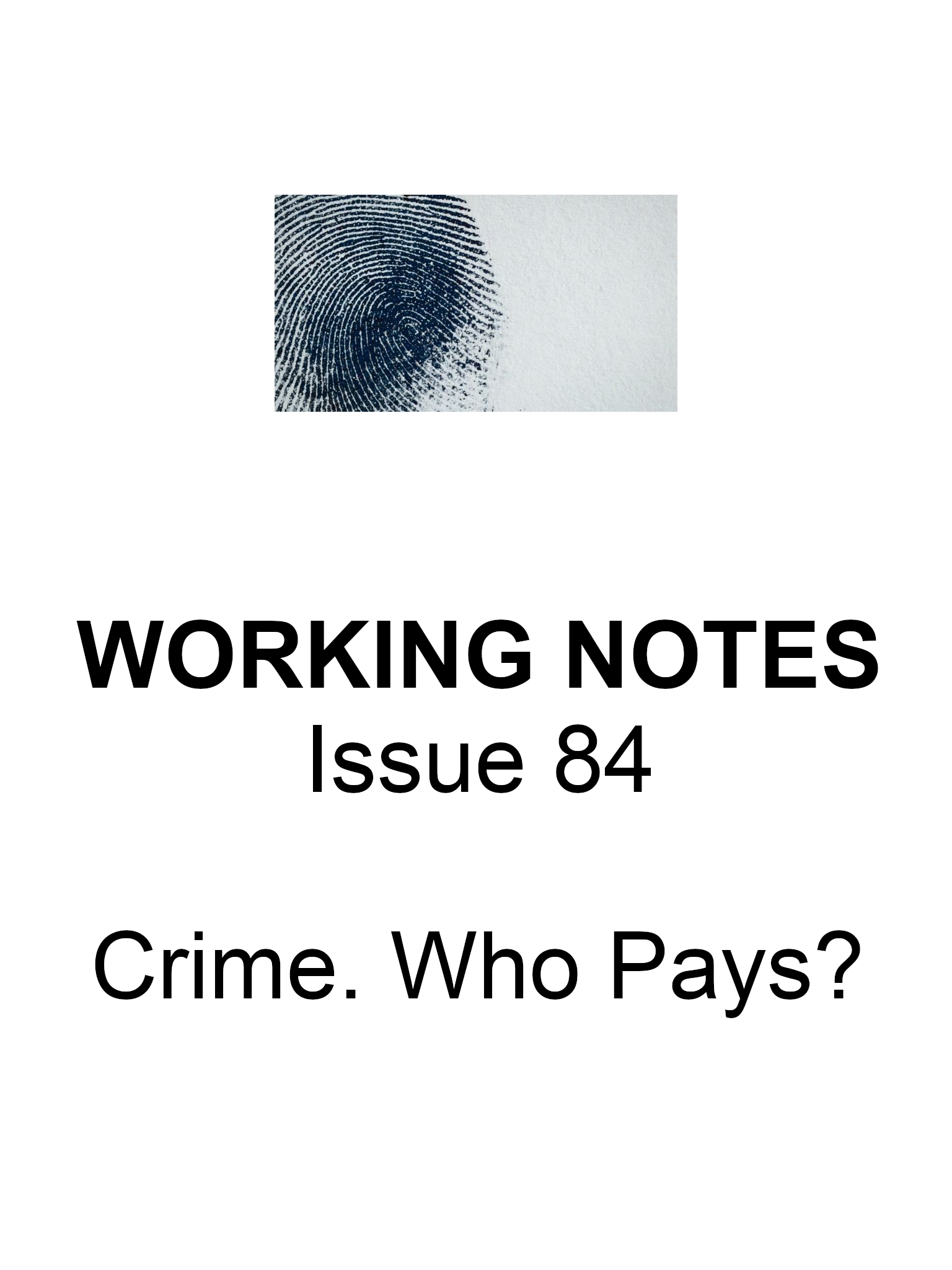 We tend to think that law defines what crime is. This makes sense because contemporary legal codes are concerned with marking out the territory where conduct is permissible by specifying the conduct that is outlawed. Yet the earliest bodies of law – consider for example, the Torah or Hammurabi’s Code – are at least as committed to articulating the good as proscribing the bad. Our modern approach to thinking about law has disadvantages, not least the harm that it does to those who are declared “criminals”. It can also be morally flat-footed. G.K. Chesterton understood this when he once quipped in a Father Brown story that the criminal is a creative artist, and the detective is only a critic.1

In this issue of Working Notes, we seek to explore the theme of crime as it relates to contemporary Irish culture and social policy. We have drawn together a range of established and emerging scholars to think about crime from within a prison, from the perspective of fraud, from an environmental point of view, and in terms of how it relates to the concept of sin.

David McIlroy is an acclaimed barrister and a gifted theologian. Such skills are rarely combined. For the last number of years he has been working in consultation with the Jesuit Centre for Faith and Justice on issues relating to the Irish banking sector and the economy more generally. His essay How to Fight Economic Crime, represents his debt in Working Notes. McIlroy is famous for his role in uncovering the PPI insurance scam, which is among the largest commercial frauds in history. He draws from that experience to sketch how economic crime flourishes, deconstructs some of the myths, and offers practical policy suggestions as to how Irish society can reduce this corruption.

Kevin Hargaden is the social theologian at the Jesuit Centre for Faith and Justice. In this issue, Kevin offers a theological reflection that takes up the work of the French philosopher Michel Foucault, to consider how crime is different from sin. Foucault convincingly argued that criminal justice, before the development of the prison, envisioned the body as the site for reparation. In our time and in our prisons – especially when we are blind to this fact about ourselves – criminal justice is concerned with the soul, the internal life, as the place where amends must be made. Hargaden argues that even if a person has no religious commitments, they should endeavour to preserve the unfashionable language of sin, exactly because the carceral state is prone to over-reach. There are crimes which are not sins, and sins which are not crimes, and having a diverse array of linguistic angles from which to describe these interesting cases serves justice. Without the old religious terms, we lose the ability to chasten the contemporary state’s intentions and we are left silent when the powerful shape the law to render “criminality” a state that only really applies to people without power.

Beth Duane is a PhD researcher in Criminology at the University of Limerick. Her particular research explores violence in prison but in her essay, Understanding Crime in Prison, she takes a wider view. Illegal drug use, criminal damage, and violent assaults are not uncommon in Irish prison. Duane draws out the ways in which a culture of criminality represents a major challenge to achieving our basic intention with prisons: that they would be centres of rehabilitation.

In Laudato Si’, Pope Francis laments that “the same mindset which stands in the way of making radical decisions to reverse the trend of global warming also stands in the way of achieving the goal of eliminating poverty.”2 His writings on the fundamentally moral nature of the environmental crisis have been deeply influential and in Sadhbh O’Neill’s article, Carbon Crimes, we are introduced to one of the most promising developments in environmental activism. An emerging body of research known as “green criminology” has successfully framed the crisis as a legal issue. Culpability and harm can now be clearly demonstrated, connecting the suppliers and utilisers of fossil fuels with the already-occurring losses and fatalities arising from climate disruption. O’Neill’s essay is one of the longest pieces we have published in the four decades of Working Notes. Of course, it is not because of this reason that this essay warrants your sustained attention. Carbon Crimes is a masterful introduction to a movement of tremendous potential, written in a bracing and clear style, and informed by a deep expertise in the science and politics of climate breakdown.

After reading these pieces, our hope is that you, as the reader, might be able to think more critically and constructively about the complexity involved in declaring something a crime and in labelling someone a criminal. Even these apparently cut-and-dried decisions are fraught with social and ethical implications. If economic crime continues to go largely uninvestigated, if prison can become a school of crime rather than a centre for rehabilitation, if corporate entities can pollute for profit and never face legal consequences, if we retire the language of sin because we imagine it regressive while embracing a vocabulary around criminality that does great damage, perhaps it is time to think deeply and rigorously about not just what constitutes crime, but what we mean by virtue.

1 G.K. Chesterton, The Complete Father Brown (London: Penguin, 1981), 12. The line is uttered by Inspector Aristide Valentin near the very beginning of the first Fr. Brown story “The Blue Cross”, as he reflects on the genius of M. Hercule Flambeau, who will go on to become Fr. Brown’s nemesis and [spoiler alert] later, friend.
2 Pope Francis, Laudato Si’, 2015, §175.