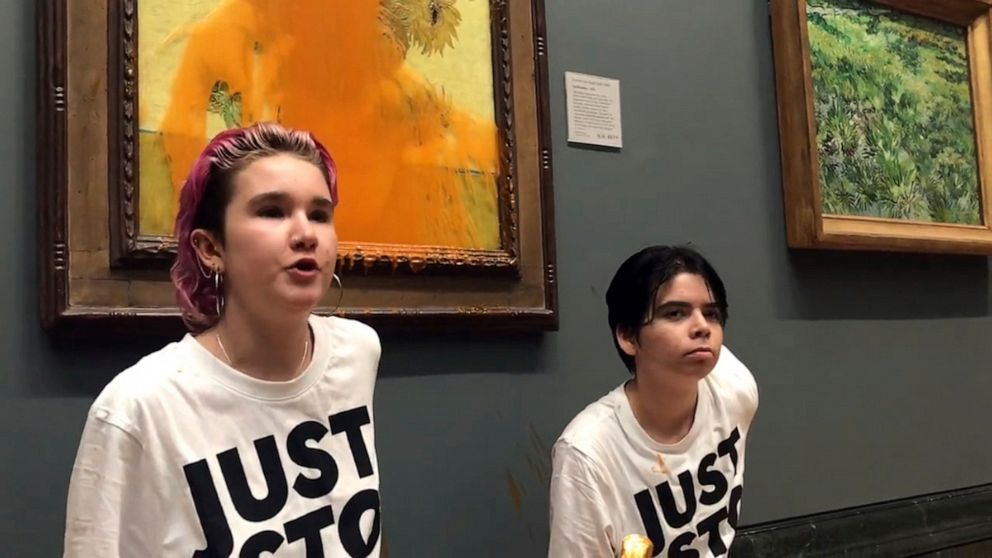 It should be a cause of wonderment that eco-activism has remained so peaceful. Scholars should study why it is that those who are most alert to the danger of the climate collapse and the biodiversity breakdown are responding with non-violent actions like tying themselves to goalposts, throwing food at glass, or gluing themselves to showroom luxuries instead of, say, blowing up gas terminals or assassinating the c-suite leaders of petro-giants.

Is there some connection with the non-violent approach of earlier environmental groups like Greenpeace? Is there some formation process at play within environmentalist cultures that creates such discipline? They block the doors to private jet terminals instead of blowing up private jets. On a basic political level, this movement demonstrates impressive restraint.

Should we be annoyed?

The common response to these operations is annoyance or dismay. The protestors who staged attacks on priceless works of art assumed that people would react with disgust at their temerity. That response makes their point for them – we prefer the symbols of our civilisation to actually being civilised and changing the present trajectory that is putting the lives of millions of people (and millions of species) at risk.

The problem with these protests is not that ordinary people are disrupted. A civil disobedience campaign that doesn’t disrupt people is just obedience. The deeper problem with these tactics is that they misunderstand the present challenge in terms of environmental adaptation. The justification for all the measures – whether that is blocking motorways or dousing offices in paint – is the raising of awareness.

But there is no lack of awareness of the environmental crisis. The fine details of methane dissipation in the atmosphere might be beyond most of us, but a basic grasp of the greenhouse effect is practically universal.

We don’t need greater levels of awareness. We need to act on what we know.

This makes the peaceableness of the environmental movement even more impressive, since a sad fact of history is that it is violence which tends to prompt (re-)action. The annoying activists are doing something instead of nothing, in an incredibly complex situation where no action is without downsides and no single response will resolve any issue entirely.

We should be grateful that our culture still generates sincere citizens willing to act so dramatically for the common good. We can also hope that these (largely very young) activists develop their tactics so that they are properly political – still peaceable but directed towards inciting concrete action instead of generalised awareness.

How should we respond to the disruption caused by climate activists? It seems that the pattern established in response to historical activism including the movement for universal suffrage and the civil rights campaign in the USA is being followed here. Both these movements have universal support today but were deeply distrusted and even despised when still fighting their battle. The young activists in Just Stop Oil, Extinction Rebellion, and other protest groups are widely lampooned and maligned, mocked for their sincerity, their naivety, their hair colour, or even their names.

No reasonable person can imagine being opposed to women having the vote today. In the same way, everyone imagines they would have been enthusiastic supporters of Martin Luther King’s civil rights campaign, even though at the time two-thirds of people opposed it.

The cause of the environmental activists is just, in a similar way to the campaigns for women to get to vote and for civil rights to be extended to all citizens. Given the magnitude of what they are fighting against, they should be applauded for sticking with non-violently disruptive tactics, instead of being mocked.

We would be wise to anticipate how we will view our own cynical dismissal of their interventions, a few decades from now.