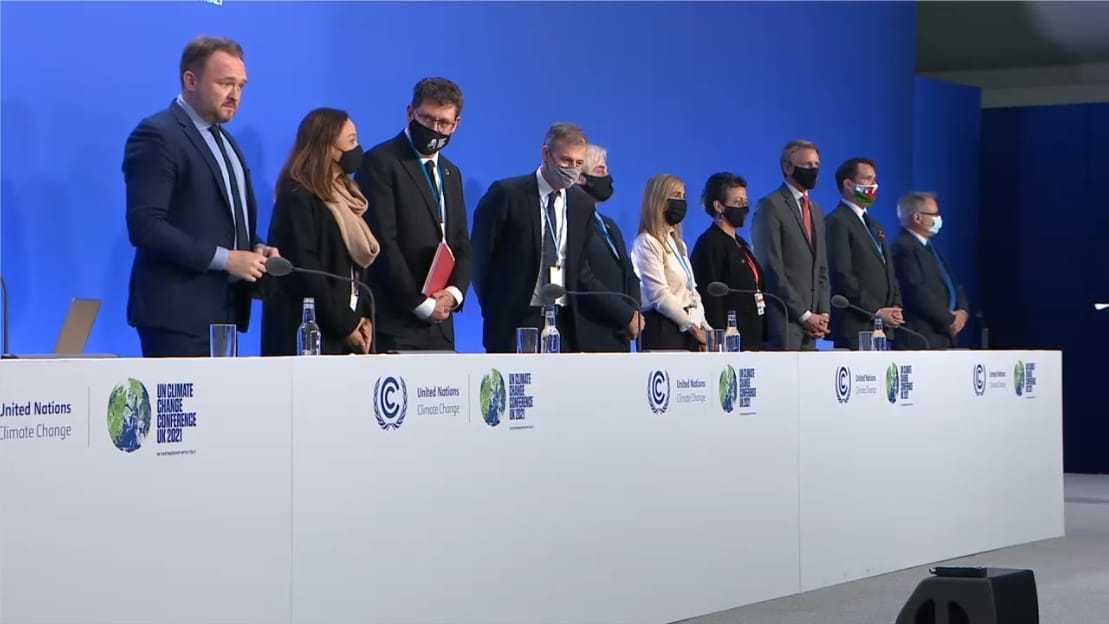 Thursday 11th November focused on Cities, Regions and Built Environment. It was a day of big announcements and mixed emotions. It also happened to be the day I had a ticket for an event in the Green Zone.

Into the Green Zone for Northern Ireland Climate Action Talk 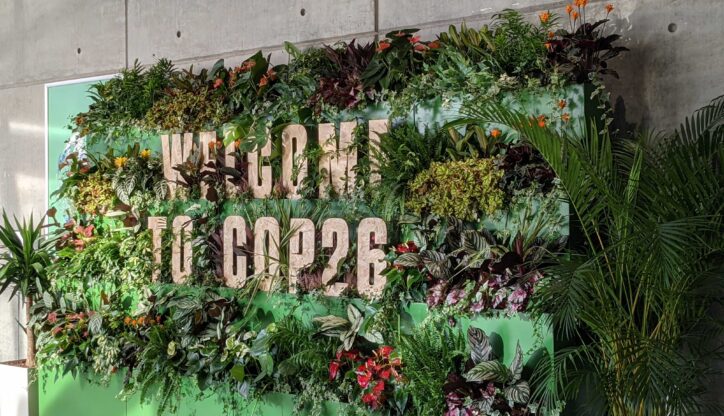 The Green Zone at COP26

My day started off the same as the previous one – with a train journey from Edinburgh to Glasgow. Heading directly to the Green Zone, at the impressive Glasgow Science Centre I had a wander around the stalls – moderately uninspired – before I entered the room at the base of the tower for my talk – ‘All Together Now: Collaboration for Climate Action in Northern Ireland’, hosted by Climate NI Network. This was a talk distilling both hope for climate action and a warning of the limitations of such bottom up action without being met in the middle by top down direction, ambition and resources. It also highlighted the potential of climate action to bridge political divides by providing opportunities to work on common actions. We all know that climate change respects no borders or boundaries. If it did the continent of Africa would be blissfully existing in a relatively unchanged climate white the more developed North, the most polluting nations would be drowning and melting at the same time.

The panel presented the tools used to develop adaption plans including NIAdapts which is a simple platform where councils can get information and support as they embark in their journey of climate mitigation and adaption. This work encourages councils to take these initial steps even though there is no legislation in Northern Ireland to mandate them to. With no legislation there is also little resources or support from the Government.

Despite these barriers the Climate NI Network does incredible work supporting councils to create and implement plans and projects across their regions. The network also allows for peer-to-peer learning between councils with more collaborative work between groups which are in a similar stage of adaption planning or implementation developing.

Some of these projects include regenerating what was waste land in Belfast city into a public park where biodiversity thrives. This park also acts as a flood defense, with areas flooding, holding the water while protecting nearby homes. In this way this one project contributes to climate mitigation and adaption, is beneficial for biodiversity and human health as it provides a public green space. Other projects include developing quality public and active transport, converting old landfills into woodlands. These actions would not be possible without partnerships with community groups, faith based groups, youth groups and between other civil society groups.

While the work done, on limited resources is an incredible achievement every panelist present stressed the need for support and guidance from the top to meet this grassroots action. For bigger decarbonisation action, like retrofitting public buildings, money is needed. In the closing the standard question of ‘why should we do this’ was inverted to ‘why would we not do this?’ We need to take action, inaction is not an option but acting now can realize so many other benefits that the money and effort needed are investments not costs. 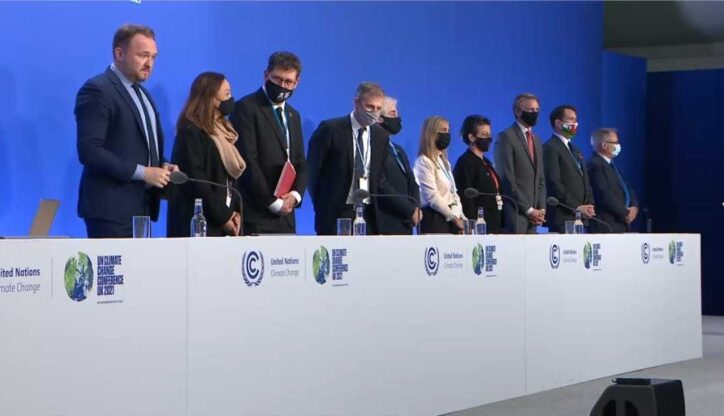 Minister Eamon Ryan and delegates from other countries at COP26

One of the biggest announcements over the course of the COP was the launch of the Beyond Oil and Gas Alliance at 12.45 on Thursday. This alliance while somewhat fringe is an exciting development as it is the first time that the phasing out of oil and gas has been specifically mentioned at COP. Ireland joined Costa Rica, Denmark, France, Greenland, Sweden, Wales and the Canadian province Quebec in committing to phase out the exploration and extraction of fossil fuels. New Zealand and California joined as lower tier members with Italy becoming a friend of the alliance. This is a group of countries leading the way in limiting the supply of fossil fuels instead of solely concentrating on the demand side emissions like much of the mitigation actions concentrate on.

Moving on from this event to the High Level Champions Event was an interesting exercise. The panel that most captured me was a talk with both Nicola Sturgeon and Vanessa Nakate. My colleague Martina, in a previous post, expressed how impressed she was by Vanessa and I would like to join her in my admiration. You may have heard snippets of her powerful speech (if not I would recommend you watch here) but the emotion and power in her voice as she told leaders that the most vulnerable people do not believe the promises made, ‘we do not see the successes that are applauded in these halls’.

There are so many broken promises including climate finance of $100 billion, agreed to be paid by developed countries has never materialised.  She stressed that air pollution is killing people now, the forecast temperature increases will mean death for otherwise healthy people as we, as a species, literally cannot survive wet-bulb temperatures above 35C. ‘We are drowning in promises’ but only immediate and dramatic action can bend the curve down. She continued by literally begging leaders to ‘prove us wrong’ and ‘show us your honesty’. She finished up by articulating the need for a Loss and Damage fund. While mitigation and adaption are vital we have past the point where things are fixable and losses are inevitable. The word loss barely covers what this actually means, lives, homes and cultures are already being lost. Devastation may be more appropriate.

Her speech, so powerful, yet it is so incredibly sad that this young woman has to literally expose her trauma and pain for the world to see to try and convince leaders, who at this stage knows the science, that her life and the lives of others are worth saving.

Nicola Sturgeon while not quite as impressive also managed to hit a strong chord. Breaking rank Scotland used the R and D words. We developed countries owe reparations and we have a debt to pay. These funds are not charity they are paying for what we have taken. That the developed countries are reluctant to pay these debts may be a crisis of conscious. Admitting the level of debt owed is inconceivable as the true amount that would need to be paid cannot be calculated. “Let the rich countries start paying this debt”. Sturgeon in her speech said that spending time with Nakate and hearing what she had to say was a constant reminder that she needed to do more. We must show solidarity with those most suffering.

Moving from this sombre conference I decided to listen to an interfaith forum where a panel summed up their experience of this COP. Hoping for some words of hope I inadvertently entered the most depressing event I had yet to experience during COP. Without fail all the members of this panel reiterated something which was a common theme across the day and indeed the entire COP event. Trust is waning in the COP process. The failure to deliver emissions reductions, failure to pay our debts and failure to extract the urgent words needed to keep 1.5C alive makes keeping hope in this diplomatic exercise difficult. Difficult questions were asked about continuing to support and place trust in this system. The danger of the arctic melting was spelled out, the exact consequences which among the melee of information can sometimes get lost were described. Acknowledging that urgency levels have been upped and the mention of fossil fuels in the draft text is a positive however they said it is too little too late essentially. ‘Only by accepting this failure and mourning can we reach hope’ they said. I am not sure I am in agreement. I do think we need to look beyond COP and find ways to take action in whatever way we can on all scales – as communities and as countries. We need to continue in this COP process as it is the structure we have at the minute but also, like the councils in Northern Ireland, not waiting for a mandate. This crisis needs action every which way from bottom, top and sideways. 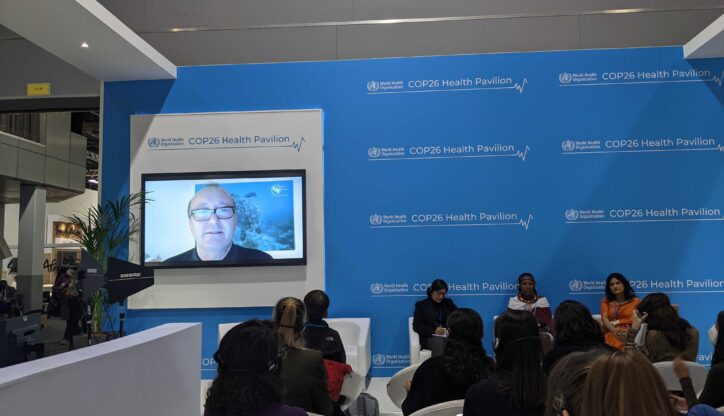 The Health Pavilion at COP26

After this difficult 30 mins I went in search of more hope. I decided the resilience hub would be a good shout. While the talks on water security in cities were interesting it was not the balm I was hoping for. I wandered to the WHO tent, and listened to the end of talk on the toll that displacement, loss of culture and climate change in general has on mental health – particularly women and children. This important discussion was not necessarily what I was looking to hear but perhaps it was what I needed to hear. The interconnectness of health, climate, conflict, poverty and loss of identity was obvious and this is an area where relatively little is done. The research on the impacts of climate change on mental health are absent and the support needed to help people impacted are equality so. This is an aspect of the climate crisis that needs more work – we talk about mitigation and adaption and just transition. Separately we talk about wellness and mental health and the importance of a healthy mind and body. We need to join the dots as one relies so heavily on the other. Hearing these voices and bearing witness to the pain is the start that is needed.

COP – a reminder of why this is important

As we were finishing up the talk, sounds from other pavilions, offering wine and beer drifted over and clashed starkly with the sombre mood in our group. I understand the need to distract – I was looking for it myself but this problem is something only some of us have the luxury to run and hide from and even then it will catch up on us. I am currently on my way home – working on the train and the ferry. I will be able to put distance between myself and the distressing stories and news but the need to remember why this is important, how it impacts people in the myriad of different ways is vital as we make plans and promises to reduce emissions and work towards climate justice.

Travelling to COP was a worthwhile experience. Participating in the different aspects of it, the pilgrimage to Glasgow, the climate justice march and the Blue Zone offered different experiences and I come away with a slightly better knowledge of the mechanisms behind these international dialogues. I wait, along with everyone else on the final outcome of the conference but I won’t be waiting with bated breath. I look for hope not only in this process but also in the countless other projects, alliances, collaborations and actions which exist and are growing.