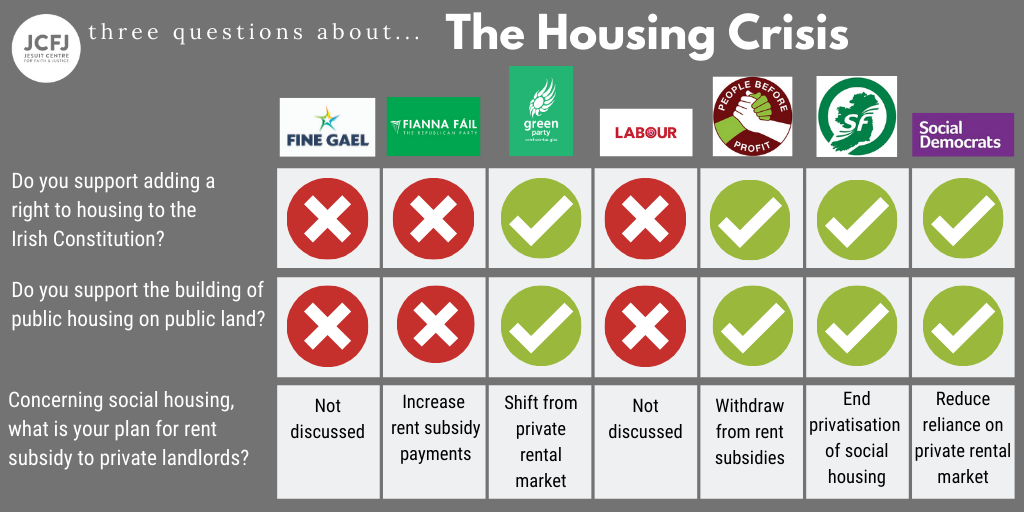 Housing has remained firmly on the agenda throughout the General Election 2020 campaign. Previously, the JCFJ proposed three questions about housing which could be used in conversations with canvassers, to see what each party’s housing policy is, beyond slogans. To close this loop, answers about housing policy were also taken from their current manifestos.

Fine Gael
No mention of support for adding a right to housing to the Irish constitution. They propose to directly provide more than 10,000 new affordable homes on both public and private land over the next five years. Fine Gael will legislate that, for land sold for housing by national or local government, “at least 30% must be made available for affordable purchase or cost rental.” While, proposing to add at least a further 60,000 homes to the social housing stock, there is no mention of spending on rent subsidisation within the private rental market. It appears that social housing will continue to be provided by new builds (private, public, approved housing bodies), leases and rent subsidisation. Read the manifesto here

Fianna Fáil
No mention of support for adding a right to housing to the Irish constitution. They propose to build 50,000 new-build social housing units and 50,000 new affordable units by 2025. No mention of who will build the housing units, whether it will be private, public or a combination of both. Similarly, no mention of the type of land on which these units will be built. Fianna Fáil propose to “increase rent supplement levels nationally by 10% to support vulnerable households” and “establish a new regular review structure to ensure the payment system for rent subsidisation is adapted to the market reality.” Read the manifesto here

Green Party
Support adding a right to housing to the Irish constitution. They plan to replace Rebuilding Ireland with a National Housing Plan to build public housing on public land, directly procured by local authorities. The Green Party propose reforming the Housing Assistance Payment to “drive investment into the provision of new social housing units rather than relying on sourcing from the private sector.” They further intend to “empower local authorities to access finance to facilitate the construction of social housing.” Read the manifesto here

Labour
No mention of support for adding a right to housing to the Irish constitution. The Labour Party propose to build 80,000 homes over five years but there was no outline of who will build the homes and whether the land will be publicly owned. They also propose to increase public housing stock as local authorities will be required to “build or acquire two homes for every one that they sell.” Read the manifesto here

People Before Profit
Support adding a right to housing to the Irish constitution. People Before Profit maintain that public land should be used for council housing, affordable housing and community amenities. They plan to begin a major house-building programme and to “withdraw from paying out €500 million a year to private landlords.” This building programme is predicted to build 100,000 units of council housing over five years. Read the manifesto here

Sinn Féin
Support adding a right to housing to the Irish constitution. They propose to “deliver over 100,000 public homes on public land to meet social and affordable housing needs.” Sinn Féin’s plan to deliver a Council-led house building programme will prioritise the use of public land for the delivery of public housing by Local Authorities. They propose to use legislation in the form of the Public Housing (Miscellaneous Provisions) Bill to define social housing support such as Housing Assistance Payment (HAP) as a temporary support for those waiting to secure permanent public housing. It is claimed that this legislative change will enable all current HAP tenants to return to the principal housing list with their full years intact. Read the manifesto here

Social Democrats
Support adding a right to housing to the Irish constitution. The Social Democrats wish to “maximise the use of public lands in order to deliver an actual build of 100,000 homes over the next five years. On publicly owned land, they would build one third affordable purchase homes; one third affordable rent and one third social homes.” The Social Democrats recognise that while income supplements are necessary to support people in accessing housing during the current crisis, “the system of paying public money to private landlords is unacceptable.” Read the manifesto here