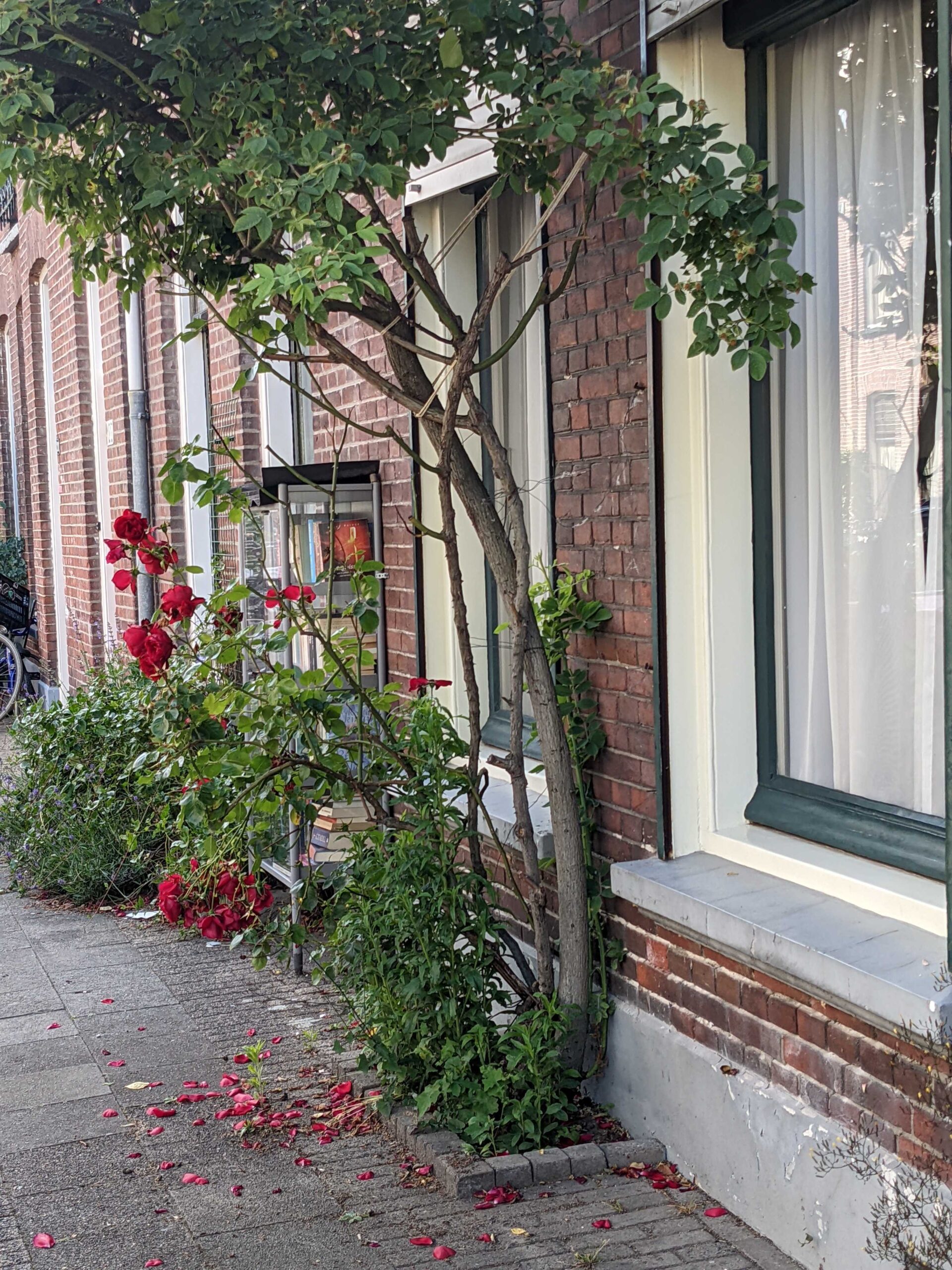 Sometimes it takes walking along a road to experience a conversion, other times a cycle may be what it takes to lead to an ecological conversion.

Last week I was lucky enough to have to opportunity to visit Utrecht on a study cycle tour. I took my time with travelling making my way via sail and rail, and then some more rail, from Dublin to London and on to Rotterdam and Utrecht, via Brussels. Much can be said about the pros and cons of slow travel, from the incredible train stations and relatively stress free check-in, to the fact that this blog is testament to the fact that it is possible to work relatively effectively on the train. But to muse on that would be to digress from the original point of the trip.

I went on this trip as I am interested in cycling. My interest isn’t (just) based on enjoyment. I am socially, politically, even scientifically interested in cycling. Cycling as a mode of transport has so many benefits: it has the capability to reduce transport poverty; improve air and noise pollution; foster inter-generational flourishing; improve public health; encourage small enterprise; cut traffic for those who need to drive; and reduce our greenhouse gas emissions.

Making cycling accessible is more involved than everyone just having a bicycle. While the ability to purchase or access an appropriate bicycle is a major factor – and one that I have recently written about – the safety of cycling is one of the biggest barriers to more people taking to the bike. The study tour in Utrecht involved spending three days cycling around the different parts of the city from the inner core to the outer fringes. We experienced the different types of infrastructure used in different circumstances and the solutions brought forward when cars and pedestrians inevitably mix with bicycles.

Experiencing good cycling infrastructure is a different thing entirely than reading about the specifics of the infrastructural designs. Good infrastructure changes the entire experience of cycling and walking within urban and rural roads in ways that simply cannot be communicated from examining detailed drawings or reading engineering specifications. My major takeaways from this trip are not specifically about cycling infrastructure, but how it fits in with the wider social context.

Cycling infrastructure is not just about cycling

Good cycling infrastructure allows you to forget that it is there. Reducing the interaction between cycling and traffic allows the cyclist to experience their surroundings in a different way. Without the fear and stress of interacting with drivers, which have the capacity to inflict serious injury, a cyclists’ concentration shifts slightly. The architecture of a cityscape, the flowers in the border or the trees lining the path become more visible. The wide cycle lanes within Utrecht allow cyclists to chat as they make their way, the silence in the absence of cars in urban areas makes this conversation easier. This silence means that the sounds of nature – birds singing, the wind making waves in the grasses and flowing through the overhead trees – are priceless additions to any journey.

The management for biodiversity was also evident in many areas. Wildflower meadows along some paths, with careful biodiverse planting along others. In areas outside of the city-centre the addition of trees provided much needed shelter from sun and wind. Another advantage of this design is that it naturally serves as a form of nature-based storm water management. The integration of abundant planting where there was once road space is a key feature in making cities more resilient to severe rain fall.

Presentations throughout the three-day tour confirmed these observations. This part of the cycling infrastructure – the natural environment and green space – is as important as smooth surfaces and markings. Creating an enjoyable experience which is safe entices more people to cycle than a safe segregated road beside a four lane motorway. Creating a network of cycle lanes which is a balance of both utility and pleasure.

While active transport infrastructure enables this stress free environment it by no means only benefits cyclists. The huge reduction in cars benefited every person in the city. Parking up the bike and walking around the city the cleaner air was obvious, navigating the roads where there were highways of bicycles instead of cars was easier. The relative quiet with the absence of so many cars made walking and experiencing public spaces more enjoyable. The lower volume of cars means that while traffic was forced to be slow there are no long traffic jams that I could see.

We increasingly recognise that brute numerical measurement of our lives – for example through GDP – is deeply reductionist. I realised that through a long-term, gradualist commitment to developing active mobility infrastructure, we would not just mitigate the environmental crisis, we would increase wellbeing (and, all the while, not harming the economy!).

Transport and housing are one and the same

Every presentation and tour we experienced during our three days confirmed that housing and transport planning are inseparable. With home as our base, we tend to travel from there to work, school, shops, and on to recreation. Having these services and locations within cycling or public transport distance is an integral part of Dutch town planning. Using clever barcoding systems, the number of services that are required for every housing estate is mapped out. The difference from the suburbs of Irish cities, where thousands of houses were built with none of the other necessities of life being factored in is stark contrast. The practicalities of linking different areas using public transport and cycling networks are incorporated into the design, sometimes creating incredible pieces of infrastructure like the Dafne Schippers Bridge.

The orientation of the houses is also different, often the fronts of houses face green areas and cycle lanes, with car parking concentrated in a carpark to the back or sides. Building houses where cars can drive up and park in front of each house requires a huge amount of space in terms of roads, parking and driveways. A labyrinth of roads surrounding each house replaces playing space for kids, green space for gardeners, or even allotments for home growers. The priorities of the planners in Utrecht are clear: new houses have to have sufficient storage space for bikes built into the house, rather than a driveway.

Utrecht was not always the prime example of good cycling infrastructure that it is now. We only need to look back a few decades to see motorways in the city centre, choked with traffic. A lot of work has gone into retrofitting the built environment to ensure that cyclists and pedestrians are given more space than cars. Where the incredible differences lie, however, are in the newly developed estates and towns. Built with slow transport in mind, the opportunities to create genuinely safe, sustainable, and pleasant urban environments are incredible. This really is something that we need to bear in mind as we strive to build ourselves out of the current housing crisis. As JCFJ have previously argued, “housing is no longer a separate issue from ecology”.

When designing any space, there is usually a trade-off between different needs. It is impossible to give priority to car users, cyclists, and pedestrians at the same time. All of the discussion so far has centred on the benefits of shifting the focus off cars and on to more active travel transport. What I learned from experiencing the infrastructure with people of differing needs and chatting to engineers who work in this area, is that the tools of cycling infrastructure which slow down traffic, making it safer for cyclists, can actually be a barrier to other road users. Speed bumps, paint, chicanes, traffic lights, and continuous paths for cyclists are all common infrastructural features in Utrecht. But for those using wheelchairs and hand-cycles as well as those using three-wheel cargo-bikes or tricycles, speed bumps can be destabilising. Speed bumps also have the unfortunate and perhaps as yet underestimated consequence of increased air pollution due to the rapid braking and acceleration of a car. The proliferation of SUVs, with their high bumpers, also reduce the effectiveness of speed bumps in slowing vehicles down. Designs around safe cycling infrastructure must keep all these different needs in mind when designing and developing safe active transport infrastructure.

With all of the safe cycling infrastructure in Utrecht, there are some streets with a simple sign translated as ‘Cars are Guest’ . Some of these roads have little specific infrastructure to slow down cars but work on the trust that cyclists and walkers are priority and cars must go at a speed to keep them safe. This change in attitude, grounded in educating people to treat their cars as the dangerous machines that they are, is one of the most interesting aspects of Utrecht’s cycling infrastructure. We need the infrastructure to keep people safe. There is no substitute for physically separating cars and cyclists to make people feel safe to cycle (and to make driving easier). But it would be a mistake to think that we can rely on infrastructure alone. 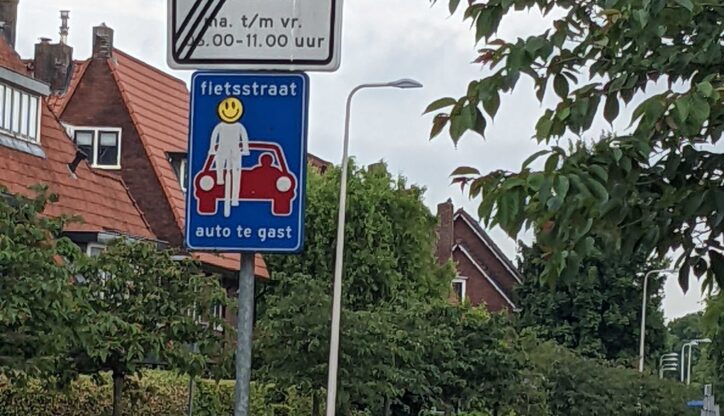 Years of dedicated commitment to cycling infrastructure in the Netherlands mean that the vast majority of people there cycle on a semi-regular basis. This conversion of a population to a more eco-friendly mode of transport is both a result of the infrastructure and is part of the cycling culture which makes it such a pleasure to cycle there.

The current Minister for Transport Eamon Ryan has made moves in the right direction, providing more than €360 million a year on Active Transport infrastructure. The Climate Action Plan (2021) outlines how we aim to ensure the proliferation of walking and cycling routes across the country. However, these ambitions have not been translated into the changes that are urgently needed. Objections to cycling routes, which include reductions in the space for motorists, are met with walls of resistance leading to projects in Lucan village, Sandymount Strand, and Salthill being stalled. Even when it is built, cycling infrastructure that is poorly designed can lead to problems in terms of cycling safety and issues of cars parking in cycling lanes is a problem which will not go away without greater enforcement of the law. Even where we have a blank canvas to work with the dominance of cars is still evident. The New Cherrywood town, currently being developed in South County Dublin, is catering for huge volumes of traffic, with roads six lanes wide in some places. The cycle lanes installed are nowhere near best practice design and will lead to issues at many junctions. In rural areas the alternatives to driving are even more scarce, with many homes, towns, and villages isolated from work places and services by dangerous roads and no public transport.

The sudden change in ambition that has come from a Minister for Transport genuinely interested in active transport has not yet filtered down through all levels of society and into the necessary regulations governing the planning of towns and housing estates. The change in mentality needed to embrace these different modes of transport is immense however replicating this experience of a genuinely pleasant cycle could go a long way for our collective ecological conversion.