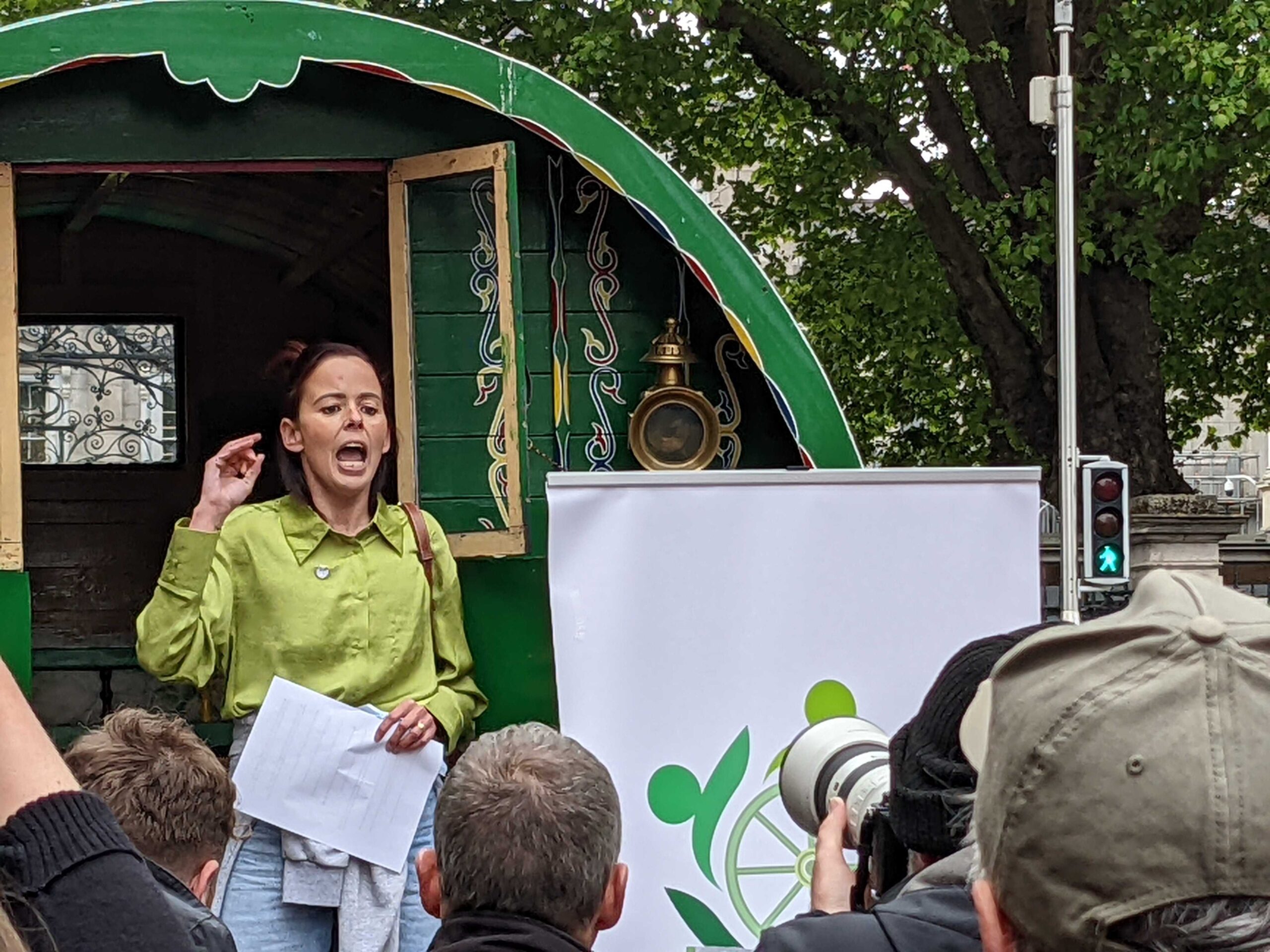 Earlier this week, the Jesuit Centre for Faith and Justice attended a protest outside Dáil Éireann organised by the National Traveller Mental Health Network. They were asking for accountability from the government for the systemic failure to address the mental health crisis affecting the Traveller community. One in every 11 deaths in the Traveller community is by suicide. This is a rate many times higher than in the settled community.

Our colleague, Peter McVerry SJ, often argues that the only reason Irish people can convince themselves that they do not have a problem with racism is that Travellers have the same colour skin as the “norm”. If we remember that racism is not reducible to personal prejudice, but is the systemic construction of society in such a fashion as to penalise an identifiable community, then we can begin to understand what is at stake.

The claim is further strengthened when we look at the response on social media whenever Travellers dare to make their plea for justice heard. In the aftermath of this protest, the usual trollish responses proliferated on Twitter, Facebook, and Reddit. In their ignorance, the vast majority of the comments would substantiate the suspicion that these websites represent a net drain on civilization. But it was clear that for some people watching or reading news reports about this protest, an honest question arose: What, exactly, does wider society owe the Traveller’s community?

We recognise the racist subtext when we encounter the familiar trope of the returning “Irish-American” visitor to Ireland who dismissively opines that “the black community is responsible for picking themselves up by their own bootstraps” but we are blind to our own callousness when we say similar things about Travellers.

One of the speakers on Tuesday, Mags Casey, spoke with gravitas about the consequences of the mental health crisis on her own life. 29 members of her extended family have died by suicide. How one carries on in the face of such relentless suffering is the immediate question that should be asked. Instead, institutionalised racism trains settled Irish people to offer objections in the face of such brutal realities.

Imagine the life of a young Traveller, raised surrounded by the spectre of death. Even without the prejudice they face from classmates or teachers, the scrutiny they endure every time they enter a commercial premises, the increased attention they attract from the police regardless of their conduct, the systemic barriers to employment, the grinding reality of fuel poverty… who has the strength to pull so many bootstraps?

All of the speakers in different ways clearly articulated what it is they think accountability means. Specifically, at this protest, they called for the long-promised but never delivered, Traveller-led strategy to address the mental health crisis. Initiatives from within the community are not enough on their own when faced with the kind of intersecting challenges that afflict Traveller communities.

From our work in the Jesuit Centre for Faith and Justice, we have a growing recognition that in each of our areas of particular interest, the Travelling community are particularly afflicted. In the area of environmental justice, Travellers are most at risk of fuel poverty and could easily be left behind entirely in the so-called Just Transition. From our work in criminal justice, we are absolutely positive that the numbers can speak for themselves. While the Traveller community makes up about 0.7% of Irish population, they make up 15% of the male prison population and 20% of the female population.

For decades we have been analysing the problems in Irish housing policy. The Centre began 41 years ago. Some of the temporary or emergency halting sites (which have minimal health and safety standards and can – as we have tragically discovered – be fundamentally neglected by local authorities) are almost as old.

Finally, the systemic injustice faced by Travellers even brings the need for renewed theology into focus. Across the last generation, one of the great advances in theological discourse has been liberation theologies, including the Black theology that arose in the United States of America under figures like James Cone. Christians in Ireland today may too easily engage with this conversation as an interesting thing that is relevant elsewhere. But we desperately need to recognise our need for the equivalent movement. A liberation theology in Ireland would intrinsically be a Travellers theology. As the Irish church learns to live in the ruins of the crimes of the 20th century, this work warrants our full attention.

A Traveller Health Action Plan has been promised by Government again. But as Thomas McCann, CEO of the Traveller Counselling Service and Hugh Friel of the Donegal Travellers Project argued from the front at the protest on Tuesday, there has been no shortage of research and papers and proposals. They take up lots of space in archives and libraries, gathering dust.

Until Irish society as a whole reckons with its racism problem, and really reflects on what effect living under the threat of daily prejudice has on the Traveller community, we should expect many more protests.