I have recently experienced the traffic congestion in Galway city and can attest that it is as stressful as a bad dream, but this week’s decision by An Bord Pleanála to grant permission for a new motorway around the city is a true waking nightmare.

It will cost at least €600 million and involve the compulsory purchase and demolition of scores of houses. It doesn’t have design features for active travel, and will damage the biodiversity of the city irreparably, generating carbon emissions that the planning body itself admits will not be mitigated.

The decision raises a real problem for the Irish Government generally and for environmentalists specifically. Our country is recognised across Europe as a climate laggard – a State that says all the right things and then proceeds with carbon-business as usual. Deciding to build a giant new motorway three years after declaring a “climate emergency” does little to rehabilitate our image.

This decision and others like it make a mockery of the elaborate plans developed within Government for action on the climate catastrophe. We have committed to the fiercely ambitious aim of reducing our greenhouse gas emissions by 51% by 2030, but now also to building this piece of infrastructure which the planners admit will increase emissions.

One can only imagine what could be done in Galway for public transport or active transport given a budget of €600 million and a similar license to disrupt what already exists.

By coincidence or serendipity, this week Government’s own Climate Change Advisory Council released a report which identified the multiple “critical gaps” in the implementation of our stated climate policies. “Transport and heat sectors” are of “particular concern” it reports.

But Will it Reduce Traffic?

The construction of the new Galway Ring Road might reduce the frustration drivers feel while sitting in a vehicle that costs a lot of money to run and is capable of travelling at 120km/h but is stuck in traffic congestion, crawling along at 6km/h instead.

But experience tells us otherwise.

Critics of the plan use Dublin’s M50 ring road as an example of what will happen – Galway will now also have a motorway arcing around the city which twice-a-day, five-days-a-week, becomes a giant car park. This phenomenon is called induced demand and it repeats over and over wherever anyone builds motorways.

It brings to mind a famous meme based on the TV comedy Arrested Development: 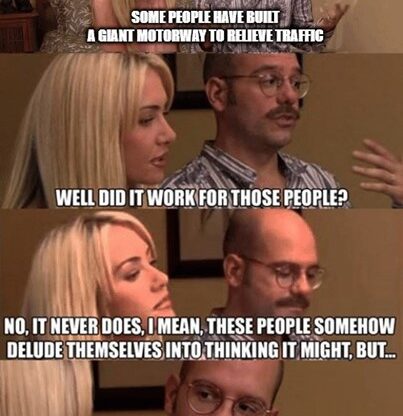 A woman who is nearing her 80th birthday recently told me in conversation that she remembered there was little discussion about the pulling up of Dublin city’s tramlines in the late 1950s. Few would stand over that decision today, especially as the city continues to spend billions laying lines for the Luas. But at that time there was such a conviction that the private motor car was the future, that tearing a public transport network apart made complete sense.

In fact, if politicians and planners had had their transport plans brought fully to fruition in the mid-20th century, the city would have been much more drastically demolished to suit cars. Some of the most loved streets in the inner suburbs would be replaced by highways, the Royal Canal replaced by a motorway, and no consideration given to the potential for trains.

Climate change is now near the top of stated concerns among the Irish electorate and a dominant issue for younger voters. The demographic reality means that parties with an eye for the way the political wind is blowing should surely be distancing themselves from these 20th century-style infrastructure investments?

What seemed like common sense in 1960s Dublin would be viewed as madness today. Yet an obsession with the car continues to have a hold on the imagination of certain sections of the Irish electorate and with our city planners.

Will the generation that follows us think the same about our decisions for contemporary Galway?