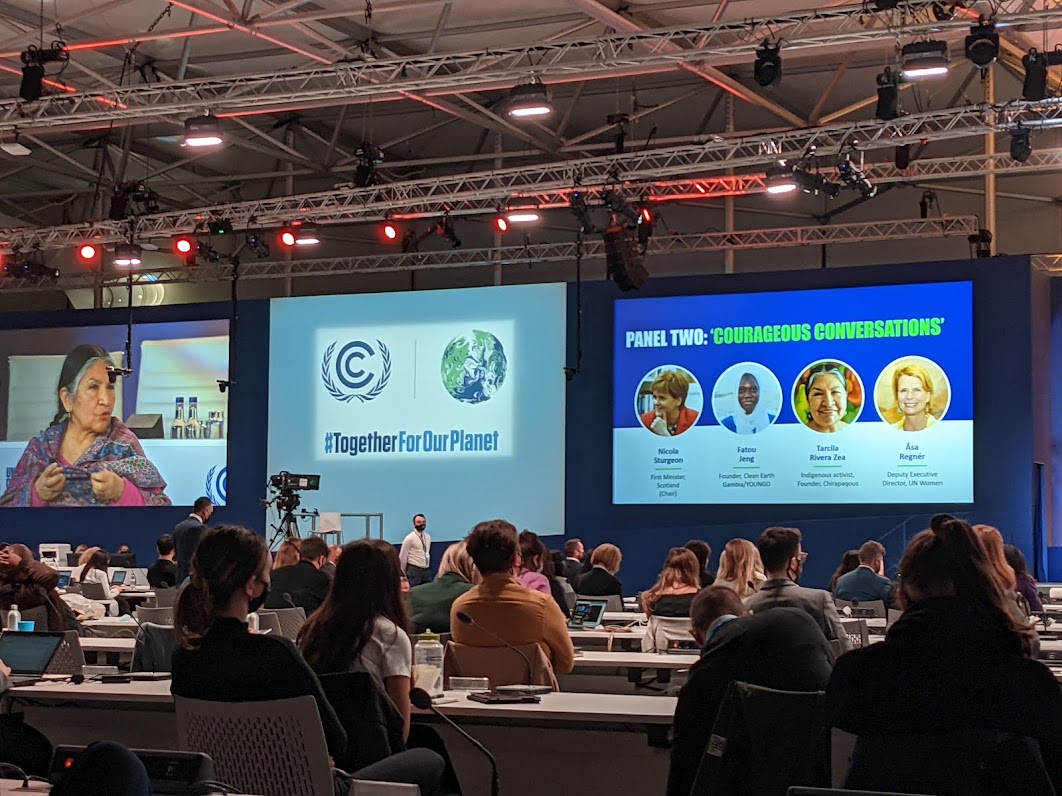 Tuesday 9th November was Gender, Science and Innovation Day at COP26. Arriving at the conference centre with a suitcase in tow I made a plan for the meetings and events I wanted to attend – a large chunk of which didn’t materialise as they were very popular and filled to capacity.

First on the list of talks which I managed to make it to (albeit after a detour to the wrong area) was the CAN daily briefing where I heard about the latest happenings in the negotiations. Climate finance, as well as the amount dedicated to adaption was high on the agenda. The need for 50% split between money for adaption and mitigation was stressed but it was noted that many countries are against it for different reasons.

The inconceivable fact that fossil fuels are not yet specifically mentioned in the documents was highlighted and the need to close the gap between where we know we need to be and the ambition and action needed to get there. The current plans for energy expansion will not only stop us from achieving 1.5C but will completely ‘blow us out of the water’. The reluctance in naming the f word starts to make sense when reading the recent reports which names the fossil fuel industry as having the biggest delegation, more than any single country.

When the panel were asked on a scale of 1-10 how confident they were that something good would come from the COP process none of the participants went over 4 while stressing that were was everything to play for over the next few days.

Today was the first day I actually joined a negotiation discussion – rather than a panel discussion or an event. In the spillover room additional party members and observers watched as different countries gave their opinions on the Common Timeframes for Nationally Determined Contributions (the amount each country says they will reduce emissions by). The options had been whittled down from 9 to just 2 – option one being reporting every 5 years with option two allowing for the choice between 5 and 10. This is a critical component of the Paris Agreement and being in the room as this one topic was being discussed I realised that it is nearly a miracle that anything can be agreed upon at all. Every country in the room showed a willingness to close this issue off during the week but in my time in the room I heard countries give divergent hard lines about what was acceptable with others choosing to be flexible. While not raised in every contribution some countries pointed out that the contributions must be science based and take into account the global emissions stock take. 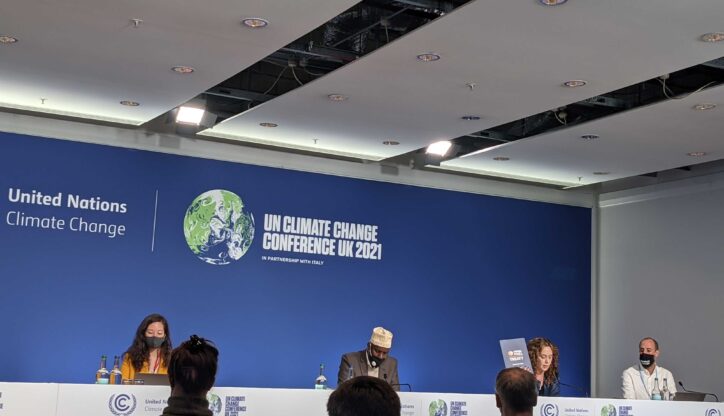 Discussions at times got slightly heated and a little salty but I came away from the discussion with an appreciation of the hard work that must be done on a one-to-one level and by the drafters of the text, while simultaneously being very grateful not to have to do it. The meeting closed with an expectation that a ‘landing zone’ (a set of compromises that will allow a deal to be concluded) could be found.

A briefing from the Irish Governmental party on the current state of play was an interesting way to end the day in the Blue Zone. At 5pm I was off to collect my giant suitcase and make the short walk to the rather lovely Sandyford Henderson Memorial Church just across the road for the event, ‘An ecumenical service of solidarity for climate justice at COP26’ organised by Christian Aid. This lovely service featured talks from people living in the Amazon forest who are not only experiencing the impacts of climate change but also live in fear of the pollution and destruction which the mining and logging activities can result in. The reception after was also an opportunity to look at the beautiful photos on show.

Myself and my case then headed to the train to head back to the Jesuits’ residence in Edinburgh where lovely food awaited me.