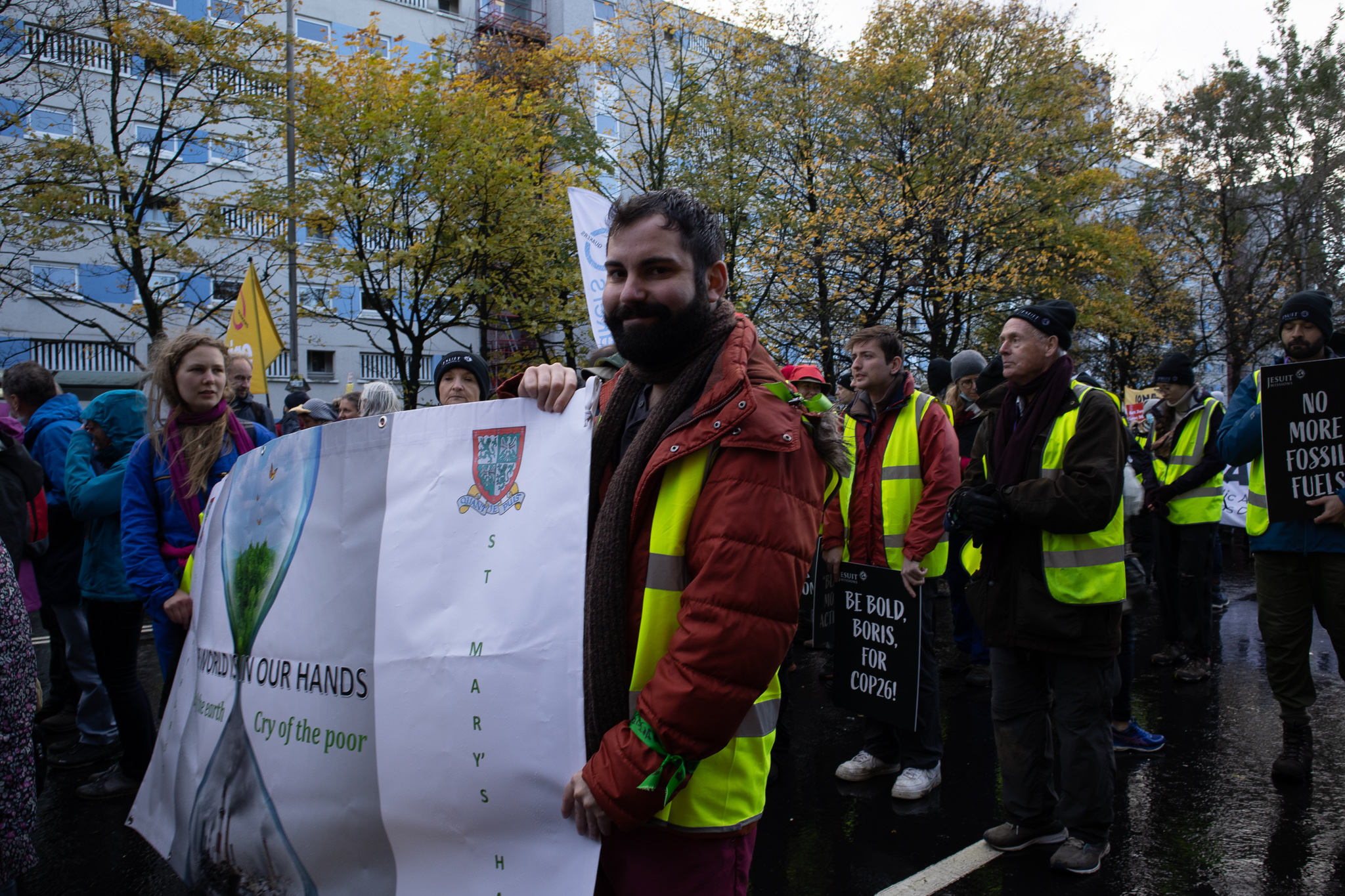 Saturday [6th November] was the pinnacle of this week at #COP26 for activist groups and people who were outside the actual negotiations. The COP26 Coalition Global Day of Climate Action – a day of planned protest took place not only in Glasgow but in Dublin and cities across the world.

It was also the day when the Jesuit Missions UK (JMUK) Pilgrimage to COP26, which Ciara was on, arrived in Glasgow to merge with the protest. I made my way into the city to meet the group as they finished their four-day trek from Edinburgh. The weather had taken a turn for the worse, and it was already squally and cold by the time I got there. The thought occurred to me at that point that I should probably have brought a raincoat, or gloves but I held out hope that it might brighten up a bit as the day went on.

The pilgrims came up the hill to St Aloysius Church in the rain, and came into the church to the sound of applause and the tune from a man playing the bagpipes. A very Scottish welcome.

Jesuit Missions UK had organised a service for the pilgrims at the end of their journey to Glasgow and before they joined the main climate protest march. The service in the Jesuit Church was opened by Paul Chitnis, Director of JMUK, told the group that their presence in Glasgow was important as we all had to keep the pressure on politicians to effect change.

Damian Howard SJ (Provincial of UK Jesuits) talked about the need to resist panic and despair in the face of climate change. The relevance of climate action to the lives of people in countries in Africa was addressed by Zambian Jesuit Charles Chilufya SJ, (Director of Justice and Ecology of the Jesuit Conference of Africa and Madagascar). He said that climate change is not an abstract concept in these countries – for many “it is a daily fact” and “just means no food on the table”. He spoke of the “spiritual crisis of human greed” which has lead to this situation, and expressed his hope that change is coming.

Faith Anderson, one of the pilgrims, read a poem by Jesuit Gerard Manley Hopkins before Lynn McWilliams (JMUK Community Engagement) explained the practical details of where to go to join the march. After everyone had eaten and had some tea and coffee, off they went to Kelvingrove Park to join with other faith groups in the Faith and Beliefs section of the protest. 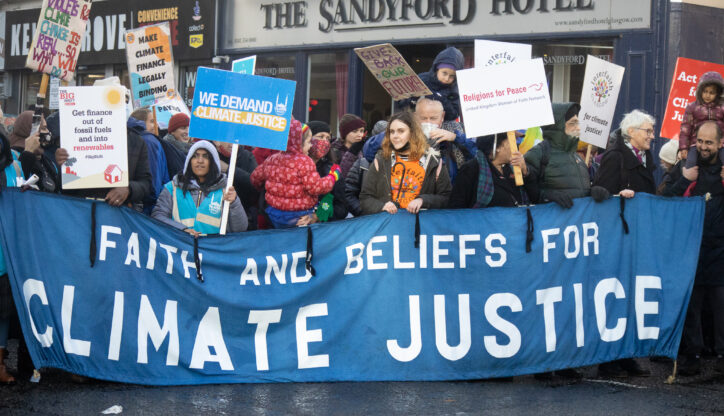 I parted company with the group at that point and went back to Sauchiehall Street to park myself in the same spot I held the day before at the youth rally to photograph the march as it passed. By the time I got there the rain was coming at me horizontally, thanks to the wind picking up. I darted into a doorway beside a paramedic to wait for the march to get close. Finally it begins to move.

I take up my position at the railing beside a man who has an anti-war banner. He’s an old hand at campaigning and knows a lot of the people who pass by on the march, shouting ‘hello comrade’ at them and going in for a hug at times. He is full of chat and it’s nice to have company as I wait to see if I can spot our ‘comrades’. 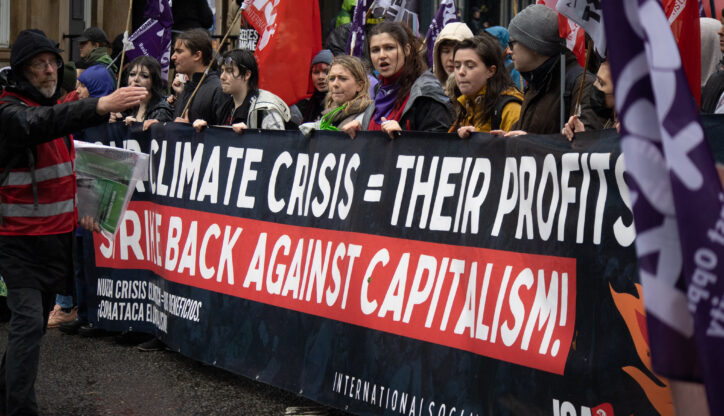 The first groups pass by with banners against net zero, against meat consumption, and against the destruction of indigenous lands – all the things you would expect. As the march progresses the climate specific banners are interspersed with more general ones from Marxists, socialists, feminists, trades unions etc. I keep a look out for the Laudato Si’ ball that I know Ciara and the others will be near but after almost two hours I can’t even see it leaving the park gates. At this stage I am bitterly regretting my lack of rainproof clothes and I can’t feel my hands well enough to even tweet! 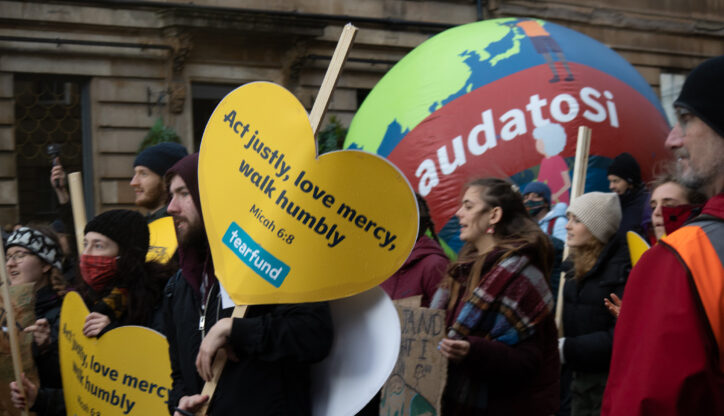 Finally I see the globe – hurray! I join the march at this point and Ciara and I are reunited. She lends me a big warm scarf, which I will be eternally grateful for. We move with the crowd down towards the rally at Glasgow Green, which is due to start at 3pm. It’s now past 2pm and we are literally miles away.

The march stalls near Charing Cross  (we learn afterwards that police were ‘kettling’ protestors here). We wait, and wait. I see on Twitter that the speeches have started. We’re still miles away from Glasgow Green. After some discussion with the group, Ciara and I (as well as others I will not name!) decide that it would be wise to leave now and go back to the Jesuit Centre to collect our belongings. We are keen to make the journey out to our accommodation – deep in the Glasgow hinterlands – before dark. Due to sparse transport options we end up walking a lot of the way and the sun is almost gone by the time we arrive.

Catching up with the rest of the group – who did eventually make it to Glasgow Green and seeing reports of the crowds that had turned out made the cold and rain all worthwhile. Let’s hope that the people’s efforts will not go unnoticed by those with the power to halt this crisis.