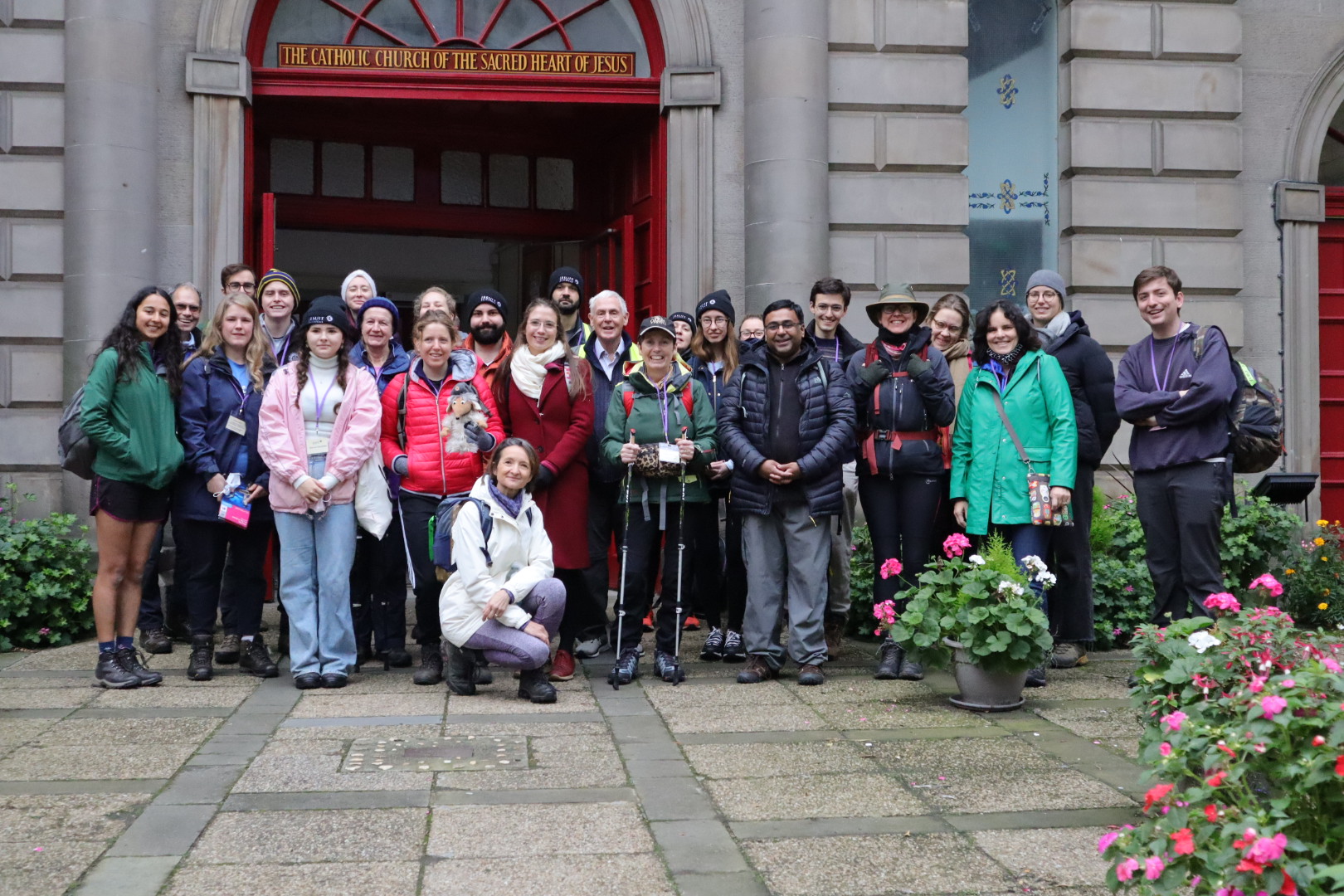 On Tuesday morning before sunrise, Ciara and I boarded the Ulysses ferry from Dublin to make the journey across the Irish Sea to Holyhead, to begin our journey to the COP26 summit. A couple of trains, a missed connection at Warrington, and several hundred miles later we arrived in the beautiful city of Edinburgh. We arrived at our accommodation – a friend’s house – in Edinburgh at 9pm, and after a quick cup of tea and chat about which of the world leaders are staying in the city with cavalcades of petrol-guzzling cars, we headed off to bed to regenerate for the days ahead.

Ciara’s journey is complicated by the fact that she has to collect a PCR test from a hotel, to be taken and dropped back to a different hotel in the morning. This is a Covid-19 prevention measure for everyone with access to the ‘Blue Zone’ – the main arena where negotiations are taking place – and she is an observer in the second week of talks. Nobody is too concerned about my level of contagion, as I will be in the less exclusive ‘Green Zone’ for much of the week with the general public.

We are beginning our COP26 adventure in Scotland’s capital because it is the starting point for the Jesuit Missions UK pilgrimage to Glasgow for the event, and Ciara is taking part. The pilgrimage is targeted at younger people (18 – 35) who are the generation most aware of and involved in climate action as they are the ones who will suffer the worst consequences if we fail to arrest the rising temperatures. 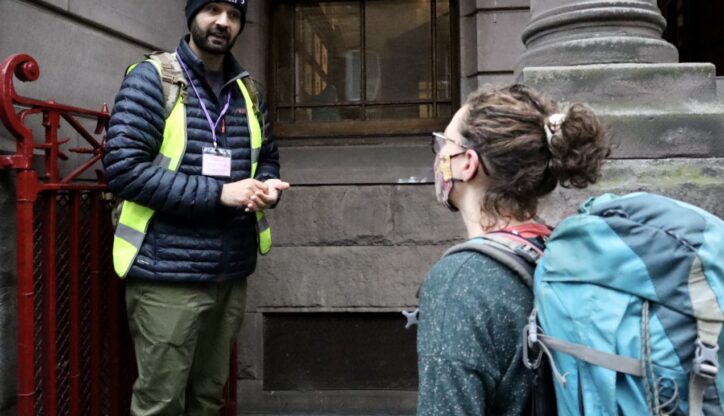 Setting off from Edinburgh

The pilgrimage began at the Jesuit Sacred Heart Church on Laurieston Place in Edinburgh, after a mass in which the group focused on their intentions for the journey and were encouraged to head to the conference with an attitude of cooperation and collaboration with others, as we are all aiming for the same goal. Colm Fahy of Jesuit Missions UK spoke to the group at the mass and encouraged them to wear the ribbons they had provided and also take photos of their mascot, a Womble.

After mass, the group swiftly got their final bits and pieces together and set off from Laurieston Place. They were lucky with the weather this morning, which is cool and dry – perfect walking weather – and the started the journey with cheerful smiles. 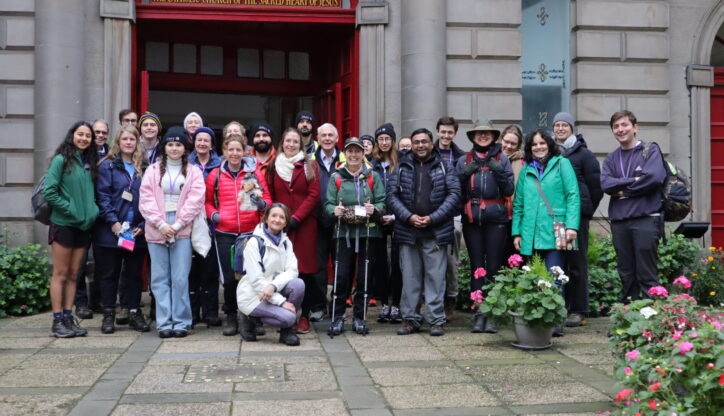 The Pilgrimage to COP26 group before they set off

There are about 25 young people in the group, and I spoke to a couple of them to find out what motivated them to join up. Two young women I spoke to told me how their faith and their concern about the climate go hand-in-hand but they find it hard to join the two things together in their everyday life. 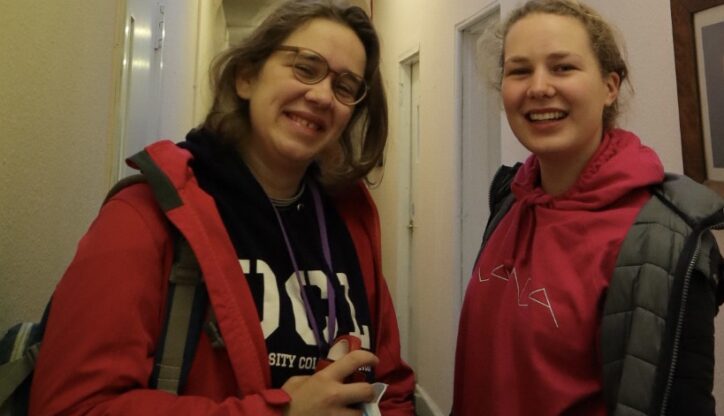 Marguerite la Rosée, a music student and cellist, said that climate change is something she can talk to her fellow students about but not her friends from church. She loves that the pilgrimage gives her the chance to combine the two, and appreciates Jesuit organisations for their ability to “go deeper”. Her friend, Marie Degenfeld, a Russian Politics student agreed and added that she loved that “fabulous Pope” Francis was so involved with the climate justice movement and that he had written Laudato Si‘. 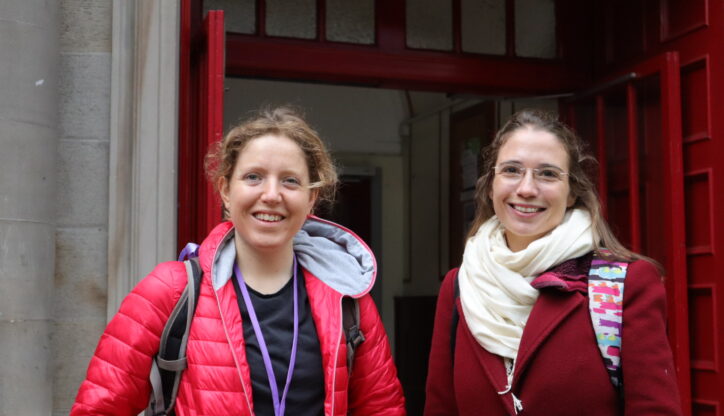 Another young woman called Faith Anderson (she says the name is just a coincidence!) told me that she attends a Jesuit youth mass in London and decided to join the pilgrimage because of her concern about climate change, and the fact that she has done the Camino di Santiago and some group walking holidays and enjoyed them.

The pilgrims will walk along the Union Canal between the two cities and are expected to arrive in Glasgow on the morning of Saturday 6th November, in time to merge with the Rally for Climate Action – the biggest gathering of the 12 days, predicted to attract up to 100,000 people.

As the group set off westwards, I left their company to catch a train to Glasgow, for my first look at what’s going on in the Green Zone of COP26. I’ll update you all later this evening…