One of the most striking elements of Dublin’s contemporary streetscape is the high rate of vacancy. The JCFJ is based in the north inner city, where remarkable old houses are left in ruin and brownfield sites in pristine locations, left idle.

We are in a housing crisis where it feels like the only thing growing faster than property prices are rental prices,  and homelessness remains at levels once thought unimaginably high. Each one of these sites seems like an inexcusable waste. They pose a real challenge to the people who operate with a default assumption that a market will efficiently allocate resources. How can such clear opportunities for profit be lying idle?  What does it say about us a society that we respect property rights so absolutely that years into this crisis, there are people living in tents while others own so many houses they can let them fall into decay? 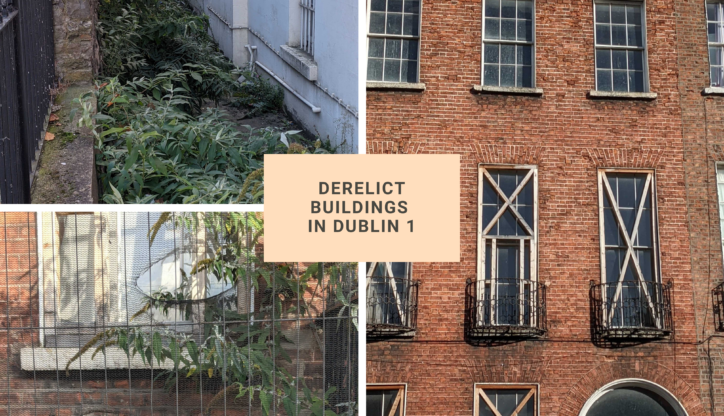 In many cases, vacancy is complex. One can imagine situations where an owner is incapacitated through old age or where wills are contested. But it is reasonable to surmise that the primary reason why people are happy to leave these potential locations of homes empty and void is exactly because of the market’s in-efficiency. The owners in many cases are speculating, waiting for the value of the land to peak. Or for the optimal moment to develop the property. It is hard not to lament these gaps in the urban environment because of the ideology behind their decay: an essential aspect of human life – the provision of secure shelter – has been turned it into a spreadsheet operation on risk/benefit management.

A particularly galling example of this was exposed by The Dublin InQuirer last month when they discovered that landowners in Coolock – who have never successfully built anything – lobbied Dublin City Council for rezoning of a vacant site in 2017, then sat on the property for two years before putting it on the market for a price 10 times higher than the sum they paid for it. Free enterprise is meant to reward invention and creativity and hard-work. The system is surely being gamed if it offers such astonishing profits for doing nothing.

Whatever way we cut it, even the most avid defender of capitalism must recognise that the market is incentivising vacancy.

To address this blight, the Government announced a new taxation policy for vacant sites in the recent budget. The “Zoned Land Tax” will apply an annual 3% levy on the value of the land. This, it is hoped, will spur those entrepreneurs into more pro-social behaviour, putting a tangible cost on their idle speculation, to prompt them into developing the land or selling it to someone who will.

But this tax does not come into force for two years, and it only lasts three years. It replaces another tax, the Vacant Site Levy, which was set at the higher rate of 7%.

One can understand why housing activists are underwhelmed.

Government spokespeople would assert that the old levy was operated by Local Authorities and for whatever reason, it basically went unadministered. But this new tax will be overseen by the Revenue Commissioners. Presumably, this will ensure that it will be implemented rigorously.

A similar initiative featured in the Housing For All strategy the government launched at the start of autumn. There, the “Land Value Sharing” protocol (p. 80) is intended to ensure that the State is reimbursed appropriately for land that has been rezoned. Implemented well, the hope is that it will close the market opportunity for the kind of egregious actions of the developers in Coolock. But no figures are mentioned in the strategy and in all likelihood the measures, when announced, will have a similar long lead-time to allow developers to stay ahead of any unexpected dents to their profits.

These technical fixes are the order of the day in Ireland. In a context where the capital city feels like it is turning into one big hotel, these small “wins” are often all that housing activists have to get excited about.

But across the world there are examples that might inspire us to more lofty ambitions. While not perfect by any means, the development of the Nordhavn region of Copenhagen is striking when compared to the developments in Irish cities. Designed in an integrated fashion, so that it tackles both housing pressures and environmental issues, the brand new neighbourhood will be traversable by bike, foot, and public transport, and thus will have a calming effect on traffic across the rest of the city. Building homes for 40,000 people in the centre of a capital city is an ambitious aim, but Nordhavn is designed from the beginning to house at least that many jobs as well – allowing people to integrate their lives and their work in the same locality.  Perhaps the Land Development Agency, established in 2018, will one day deliver similar scale projects. But it is notable that as it stands, no political party is willing to cast that kind of vision.

At least half a million South Korean workers went on general strike yesterday and one of their demands is that one in every two houses in the Republic should be publicly built and owned. 140 years ago in Ireland, the Land League published its famous “No Rent” manifesto. Faced with the realisation that securing a stable home was out of reach of most ordinary people, the Land League was a mass mobilisation which sought justice for those who found themselves at the whim of landlords. Although the British aristocracy is long gone from Ireland, the League’s “3Fs” campaign still has resonance centuries later, where increasingly people live in properties owned by those who never set foot on the island of Ireland. Two out of three of the slogan – “Free sale, fixity of tenure, and fair rent” – continue to elude many people. The No Rent manifesto was issued by Charles Steward Parnell from prison and it insisted that “against the passive resistance of the entire population, military power has no weapon“. This type of mass movement is not showing signs of a resurgence in Ireland, but the example of South Korea’s citizens should give us pause.

In Berlin last month, a referendum was held which passed resoundingly. It is non-binding, but it calls on the city to actively take more than 200,000 homes into public ownership. Utilising “common good” aspects of German law, the city now has a clear mandate to reappropriate the properties owned by any landlord with more than 3,000 houses in the city. In all likelihood, that will not come to pass. But with a million people voting in protest of what we call “vulture funds”, the city’s politicians are now clearly empowered to change the legal and economic structures of the city to more clearly favour residents over investors.

Such developments might seem like fantasies in contemporary Ireland, but a similar proposal was made in a government-sponsored report back in 1973. The famous Kenny Report called for the creation of “Designated Zones” where local authorities could forcibly purchase property at a set amount of 125% of the market-rate. This would protect the profit-incentive but free up the State to act in the best interests of the common good when it came to housing. Had we put that plan into action, we would surely have avoided the Celtic Tiger property bubble and the current homelessness scandal. But the political imagination then, as now, was allergic to anything but the incremental tinkering with the status quo.

In the days of the Land League, it was all too easy for prevailing sentiment to doff the cap to authority in the form of the British ruling classes. It took leadership and vision to encourage people to go beyond a “please sir” mentality on matters of the public good. Today, those in power in our society all too readily doff the cap to the imagined force of “market sentiment”. But as these examples from our past and from others’ present demonstrate, we can think bigger than reformatting a levy here or constructing a new planning structure there.

The housing crisis is leaving hundreds of thousands of people in situations of existential precarity. The property market has perpetually distorted Irish economic development for generations.  A large-scale, popular movement may be required to nudge our leaders out of their complacent and mis-placed deference to those who want to make a profit out of our homes.