On October 4th, to mark the end of the Season of Creation and coinciding with National Tree Day, communities, schools and works across the Irish Jesuit Province were planting trees. We harbour no illusion that planting trees absolves us from the necessary, hard work of reducing our overall ecological impact. But this simple act of planting trees, will not only feed the bees and the pollinators when they flower and the birds when they fruit and go to seed, but is a symbol of our continued ecological commitment.

The Irish Jesuit Province is at the start of our shared ecological conversion. A project to develop a ‘Caring for Our Common Home’ policy is currently underway with increasing commitment and ambition throughout the Province to reduce our emissions, care for biodiversity and create a healthy environment in which we all can thrive. We must start telling and living a better story than the one we currently have.

The trees planted across the Province are mainly native Irish species and are specifically chosen to increase the diversity within each green space. Hawthorn, planted in the small garden of Irish Jesuits International, is a very important species for wildlife. Branches heavy with flowers in the Spring are a hive of activity as hungry pollinators favour this native species. In Autumn the distinctive red berries are a good source of food at the close of the summer. The thorny branches a perfect nesting space, the painful spikes enough of a deterrent to make the residents relatively safe.

Crab apple, the newest floral addition to the Gardiner Street garden, will not only provide food for pollinators but will also help fertilise other apple trees growing nearby resulting in more apples growing on different apple trees. While crab apples might not make the tastiest fruit for humans, birds love them and they do make excellent apple jelly. 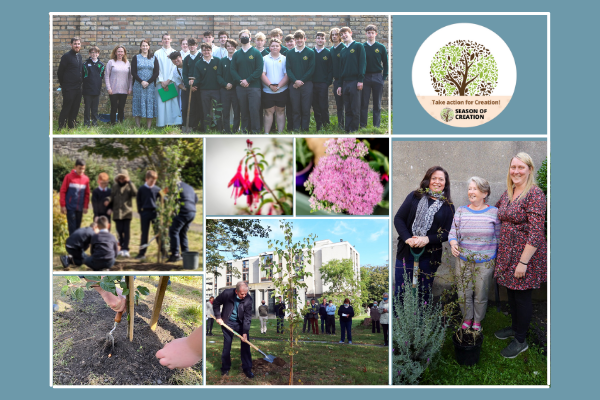 Trees and flowers being planted in Jesuit works across Ireland

Gonzaga Jesuit College planted an elm tree on their school grounds. The growth of this magnificent native tree, whose population suffered devastating losses in recent decades due to Dutch elm disease, is a sign that even after destruction there is still hope.

The Jesuit Community in Galway, not having the space to plant a tree, improved their pollinator garden with some beautiful nectar rich plants. Creating these havens in largely urban areas is extremely important for the biodiversity existing within our cities. Meanwhile, in the Jesuit community in Milltown, a willow tree was planted, which will be laden with pollen-rich flowers providing food for the bees and butterflies resident in Dublin 6.

Jesuits and laypeople on retreat gathered in Manresa Jesuit Centre of Spirituality on the sunny morning to plant a tree. The silver birch is the first of a planned planting to supplement the magnificent arboreal culture already present in Manresa. As part of the native ecosystem, it is host to many insect species and birds, its light canopy allows woodland flowers to flourish beneath.

While these small additions themselves will not be enough to turn the tide of the climate and biodiversity crises, small acts always need to be celebrated as they inevitably lead to larger actions. Sowing the seed of action with students and adults alike, fostering a love of nature and appreciation of the fruits it provides is a vital part of the ecological conversion that we are called to have.