Following a 10-day “grace period” after the blanket eviction ban ends today, April 23rd is the date when evictions can resume in the private rental sector.

Renters are the least protected tenure grouping within our housing system in Ireland. Despite the implementation of different schemes, tenants have, by and large, been left to the whims of a private rental market characterised by insecurity of tenure and rents which bear no relationship to ability to income, but are set by market forces.

Crumbs from the Table

The Department of Housing’s approach to protecting renters has been guided by an extreme laissez faire philosophy. The piecemeal, reactive, and blunt interventions that are made on behalf of renters are in stark contrast to the anticipatory development of sophisticated policy mechanisms, tax structures, and other incentives for landlords and institutional investors, indicating where the priorities of this government lie.

The Department’s reflexive response to tenants has not changed, even though we have now been in a public health emergency due to the Covid-19 pandemic for more than 12 months. The Government has introduced four Bills in its current term; the latest being the Residential Tenancies Bill 2021 signed into legislation earlier this month. To ensure that tenants will not receive protections for any period that is longer than completely necessary, or landlords be constrained from their “constitutional” right to do as they will with private property, the Bills are typically short-term and not part of a wider suite of tenancy protections. Positive changes such as a general eviction moratorium, which bring relief to renters and prevent new homelessness, are time-limited so the previous way of operating can resume instantaneously. “Returning to normal” is clearly the agenda, even though the old normal included an unparalleled homelessness crisis and cost increases that shattered any reasonable understanding of affordability.

With each new Bill which has passed into law, there has been mounting criticism as the protections for tenants from eviction are further eroded. A highly significant change came with the legislative coupling of the 5km limit and the general eviction ban which means that once the 5km restrictions are lifted,evictions can resume. Using a measure calculated to protect public health to limit the protection offered to people’s homes is, at best, a category error. For a government to bind its own hands in the midst of a pandemic is either deeply foolish or profoundly calculating.

The most recent Bill leaves certain renters out entirely, consigning them to a labyrinthine legacy process to secure protection. All this engineered complexity does is put barriers up – during a pandemic – to protecting people. We can see this in the fact that only 407 people availed of the option.

Growth in rents in Ireland since 2000 far outstrip any other country in the OECD. Now we are facing a new dimension to the consequences of our refusal to build public housing and our quasi-religious faith in “markets free from regulation”. On April 23rd, the reality of rent arrears will strike hard for many, especially those most weakened by the pandemic. 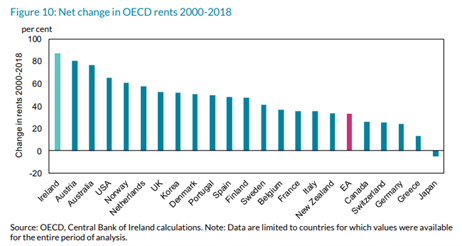 Time for a Radical Re-Think?

Before the last budget, Threshold called for a €20 million rent arrears fund to be created to underpin additional financial supports for renters in the form of long-term, low-interest, State-supported loans and debt forgiveness schemes if required. Prompted by a parliamentary question, the Minister responded directly that, “informed by the evidence provided by research into this area, it would not be appropriate to establish a debt forgiveness scheme, as proposed by Threshold, to write-off rents payable in the residential rental sector which plays an important role in providing accommodation for many.” As no rental sector can function with amassing rent arrears, it may be time for the Minister to revisit some of Threshold’s suggestions. The need is evident as more than 12,500 people have applied for Rent Supplement since March 2020.

The creation of state-supported loans to repay arrears would likely only prolong household debt into the future, adding to future income being spent on housing. However, consideration is warranted for  the feasibility and benefits of a rent forgiveness scheme which can form part of a economic stimulus package when normality resumes. Household spending could be diverted into the active economy where jobs are actually created and money flows through communities rather than towards loan repayments directly or by proxy.

A fair and effective rent forgiveness scheme should be based on the following foundational elements:

1: Arrears not a reason to evict

Eviction is not a pressure-valve that can be used to solve a social problem like rent arrears by creating an even greater social problem. In recognition of tenants’ immediate need for a home, rent arrears should be legislated against as a reason for eviction during a public health emergency and the future transition period to normalcy, (likely the end of 2021).

A blanket reduction of rents by a third would be the simplest and most efficent mechanism to both reduce rent arrears and ease the existing rent burden for private renters i.e.  a 33% rent reduction until the end of 2021 backdated to the beginning of March 2020. The total backdated sum of the difference in current rent and the reduced rent should be written off against any accrued rent arrears. This simple intervention would instantly remove the issue of rent arrears for many families and tenants.

For example, if a tenant was paying an existing rent of €1,500 (the national average at the end of 2020 was €1,414), their reduced rent would be now be €1,000 (the national average as recently as early 2016). If the tenant has been in situ for 12 months, they would have accrued a theoretical sum of €6,000 to write off against any arrears. Landlords who have been proactive in offering rent reductions, so that existing rent arrears are low, will not be disadvantaged by this proposal as calculations could be based on rent levels entering the pandemic.

The two universal measures outlined above would address the immediate needs of private tenants thereby permitting time to conduct research into the true scale of rent arrears; both its widespread nature and the intensity of debt being accrued. Based on these findings, which could be available by the end of 2021 or earlier, a fund to offer additional targeted support to compensate landlords or aid tenants who may remain in a difficult financial position after the blanket rent reduction measure should be put in place.

This fund is unlikely to need to be greater than €20 million as the rent reduction measure will have significantly reduced or eliminated rent arrears. However, a key step-change is that the onus should be shifted to the landlord to demonstrate financial difficulty as they have received rent increases for almost a decade. Criteria could be established, as in currently the case in Spain, to differentiate between landlords in relation to financial difficulty.

These proposed steps, as part of a wider rent forgiveness scheme, have a number of advantages. With the universal rent reduction doing a lot of the heavy lifting, complexity is removed the process but implementation and enforcement would remain key by a suitable body. The targeted element of the support fund will provide compensation for landlords by meeting the needs of those who remain in financial difficulty. When the ban on evictions is lifted, a landslide of homelessness will follow which will cost the state dearly unless some resolute preventative action is taken now.

If the social problem of rent arrears increases while the protection from eviction is eroded, a fragmented and reluctant response will not be sufficient. Creating a policy environment which  solidifies household debt or allows evictions to become widespread again will deepen the problems created by successive governments, which have consistently favoured landlords over tenants. The end result is a homelessness crisis, an unaffordable rental market, a dysfunctional construction sector, and the increasing precarity around an essential aspect of life: securing a home.

We know that the end of the pandemic is the start of a chance to ‘build back better’, to narrow the wealth inequality gap, to mitigate an intensifying climate breakdown, to house our neigbours. A debt forgiveness plan seems radical. It would upset the powerful in our society. But it would be a wise politician who embraces it. History will remember them well.

Mixed-income, multi-generational public housing with high-quality amenities and public transport must be the “building back better” which the Department commits to. This is the greatest protection from rent arrears. Yet, in the short-term, while those developments are constructed, policy mechanisms are required to prevent tenants exiting the pandemic with devastating debt and precarity due to no fault of their own. The least that this Government can do is restore tenants to their previous position. To not do this is moral bankruptcy.

A rent forgiveness scheme is the break with the past that would allow us to build a new future.