On Monday, Kitty Holland reported in the Irish Times that ten families in a development in south Dublin, including elderly and sick people, face eviction into homelessness. Some of these people have lived in the development for almost 20 years. Their children are going to school in the local area. They are embedded in this neighbourhood.

The owners of the property want to evict them and re-let them, probably at twice the rent they are currently paying and they have used various loopholes to get around the protections afforded to tenants. After four years in the courts, the property developer landlords have won. The vulnerable tenants have lost. They face disruption, relocation, and an imminent risk of homelessness.

In response to this story, one person read this heart-breaking story and concluded that landlords are the real victims here. In a letter to the Irish Times, they lamented eviction, but insisted that “more cogently”, our attention should be on the onerous legislation that is “chasing landlords out of the market”.

We should not disregard this as the opinions of a solitary individual. In the midst of a homelessness crisis unparalleled since the founding of the State, a consistent narrative has been presented that, somehow, landlords are the group really suffering. The letter writer complains of “crippling taxation”, which is singing from the hymnsheet provided by the Institute of Professional Auctioneers and Valuers who prophesied an exodus if the wealthy were not given tax cuts. Articles about the “landlords leaving the market” are often notable because they do not feature any figures at all to back up their basic claim. The reason why this is the case is because they are hard to find.

While there was a significant drop-off in the numbers of registered landlords in the private rental sector in the very dark days of the recession around 2012, the consistent pattern since the recovery began has been a steady plateau.

In an internal document, one of the nation’s leading property agents, Savills, has reported that there are structural changes to the rental sector. While some small landlords have invariably left (for reasons that we cannot confirm one way or another), a major shift has been in the amount of landlords who are now renting without needing to service a mortgage. The proportion of properties owned outright has risen almost ten points, so that now more than six in every ten homes available to let are without a mortgage. 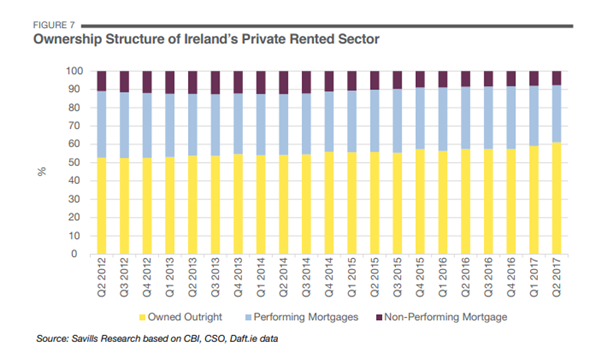 This is not a picture of a sector in distress. The letter writer to the Irish Times cautions anyone from investing in this part of the economy. But they seem unaware of the fact that revenues are now higher than they’ve ever been. The national average rent is hovering just above €1400, more than €300 higher than it was at the peak of the Celtic Tiger. To put this into perspective, it is useful to consider the advice that is typically offered about sustainable budgeting. Ideally, the cost of accommodation should be about 1/3 of your income. One third of the average monthly earnings in Ireland stands at €1194. The average monthly rent stands at €1414.

We are clearly operating in a situation where the average person is stretching to keep a roof over their heads. This makes sense of the data we have from the ground which clearly testifies to the fact that the major reason people are homeless is not addiction or some dreadful tragedy, but a basic failure to afford the prices being charged.

Thus, we can see that the claims that landlords are fleeing the market is false. There is no grand exodus. And the stable numbers of landlords have less debt and more revenue than they have had in the past. As to the idea that the law and the regulation favours the tenant, the story Kitty Holland tells debunks that idea, even before we remember the more than 2,300 children currently homeless in this country.

Instead, what we see is a market which has posted record investment, increasing capture of what little investment local authorities can make in housing, and continues to receive a daily subsidy from the State – with no lasting value – of more than a million euro a day through the HAP supplement.

Not every landlord is a villain. And not every landlord is exploiting their tenants. The housing crisis cannot be an excuse to find some scapegoat. But cool, clear analysis of the facts should lead us to the conclusion that the only people who benefit from the system we have in place are those at the top; vulture funds, developers, and those with enough assets in the first place to make further investments. The people in St Helen’s Court who do not know where they will live have no dividend to look forward to at the end of the year.