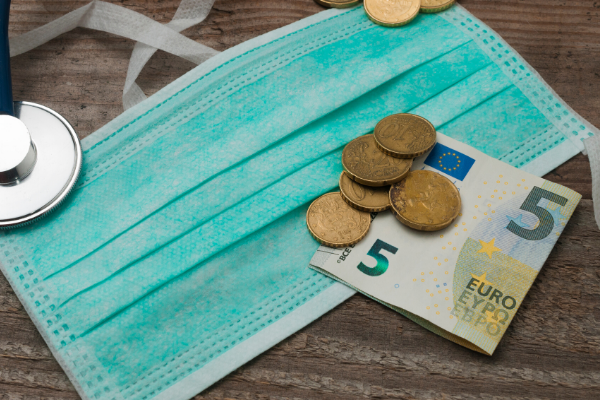 On March 26th, readers of the Financial Times saw an unexpected obituary. Among the many victims that have already fallen to Covid-19, the go-to source of news for global capitalism declared the end of neoliberalism. So many established facts of life have fallen under the force of the pandemic that many people are openly speculating that the reigning political orthodoxy of the last generation will be exposed as bankrupt and a new and better future will emerge from this great tragedy.

While we are all forced to focus on flattening the curve, it is easy to imagine our present solidarity will persist for good, but once the crisis is over, the ideas that are lying around will be from the old playbook of austerity and brutal individualism.

Unless, that is, we start drawing up some new ideas. This process has already begun, especially in conversations around the Green New Deal. If we want to protect ourselves from the vulnerabilities built in to neoliberalism, it is our collective responsibility to build alternatives.

If neoliberalism is now dead, what was it when alive? It is one of those infamous concepts that has been applied in such a sloppy fashion that some people dispute whether it is even a meaningful term. Very often, especially on social media, neoliberalism can appear to be a word that just stands in for “whatever it is this particular author dislikes”.

In reality, neoliberalism is a clearly identifiable political movement that emerged from conversations begun in the 1920s, came of age in South America in the 1970s, became ubiquitous around the western world in the 1980s, especially after the fall of the Soviet Union, and today has become so enmeshed in how we think about social, political, and economic issues that it is easy to mistake it for common sense.

Neoliberals have propagated a radical theory of the State as fundamentally inefficient. Friedrich Hayek famously believed the State was almost necessarily tragic – that democracy seeks to improve the lot of the many by the use of the State, but instead of creating a heavenly utopia, it stifles freedom, curtails invention, duplicates inefficiencies and generates a hellish totalitarianism. Neoliberalism suggests instead that the “Market” should be the focus of our political ambition. The State should shrink or at least be strictly curtailed to give space to the genius of market competition to bring about social improvement. If you have ever read glowing accounts of how billionaires are “wealth-creators” or “job-creators”, you have engaged with the softer side of this philosophy.

There are particular policy proposals favoured to generate this situation, especially around de-regulation, liberalisation of trade, and privatisation of State functions , but neoliberalism can perhaps be best summed up in William Davies’ definition. He suggests it entails the disenchantment of politics – we no longer think about our political life as a deliberation in common about the world we want to live in, but imagine a range of vying possible products instead, all strictly evaluated in terms of a cost-benefit analysis. This disenchantment – where politics is no longer about the good and instead is about the efficient – is why critics of neoliberalism have often joked that it is easier to imagine the end of the world than to imagine the end of capitalism.

It’s the End of the World as We Know It. Do we Feel Fine?

But now, in these strange days, when the unnatural silence of our city streets is often broken only by the wail of an ambulance, it can feel as if the end of the world has come. In the face of the Covid-19 pandemic, governments across the world have found that the tools of neoliberalism are useless. Instead of austerity in public finance, stimulus is now called for. The years of cost-cutting in search of efficiency in public services have

been exposed as a catastrophic mistake. The need for social solidarity has put an end to the neoliberal lie that society is primarily made up of individuals. It is for this reason that institutions as committed to capitalism as the Financial Times are declaring neoliberalism to be a moribund ideology.

At the Jesuit Centre for Faith and Justice, we urge caution about celebrating the death of this movement. When we track carefully how neoliberalism has advanced, we see that this moment of crisis is much more likely to be a period of development for neoliberalism than bereavement. After all, no electorate would ever willingly vote for a political project which promised the unweaving of the social security net, the radical growth of economic inequality, and a cultural revolution which valorised over-work as virtue. As a general rule, nations only adopt this ideology in a time of crisis. The exceptional measures become the norm. The old order is overturned for good as society becomes handmaiden to the market.

This trend is not just discovered in after-the-fact analysis. It was always part of the neoliberal playbook, as encapsulated in the famous quote from one of its intellectual leaders, Milton Friedman. He argued:

“Only a crisis – actual or perceived – produces real change. When that crisis occurs, the actions that are taken depend on the ideas that are lying around. That, I believe, is our basic function: to develop alternatives to existing policies, to keep them alive and available until the politically impossible becomes the politically inevitable.” (Capitalism and Freedom, xiv.)

After the 2008 global financial crash, Obama’s chief of staff, Rahm Emmanuel, put this theory into explicit practice in their bailout of corporate America. “Never let a serious crisis go to waste,” he urged.

We have seen remarkable shifts in Irish government policy over the last month. At the Jesuit Centre for Faith and Justice we acknowledge the extent to which the current Government has tried to be proactive in the face of the pandemic. But we also know we would all be much better off if some aspects of what might be called the covidjustments became permanent, especially around protection for renters, and the single-tier healthcare system where medical practitioners are given the support they need to excel at their jobs.

We suspect, however, that unless there is a concerted move to make this a reality, life will return to neoliberal normality as soon as the crisis abates. Housing policy will suit landlords instead of tenants. Homelessness will remain as a blight on our society. Private health insurance will return as a de-facto requirement to access timely medical care. Economic inequality will be exacerbated as those with wealth already are better able to cope with tribulation. The State will willingly shrink back to its emaciated frame as “market competition” takes over. And this will leave us all collectively and individually vulnerable again.

Back to Life, Back to Reality?

A day is coming when our lives go back to normal. But that should be a new normal, where medical care is universally available, everyone in Ireland is housed, and where the basics of education, social inclusion, and material provision are assured. We don’t need to kill neoliberalism. We need to replace it. Arguments about a possible Green New Deal have been building for the last year and they now represent our best hope for building our society back up, but better this time. Instead of the neoliberal orthodoxy that protects financial markets, supports big businesses, and cuts social services, we should prepare the ground now for an economic retrofit. Covid-19 is a foretaste of the social solidarity that will be required at a much larger scale as the effects of climate and biodiversity breakdown intensify.

Few people are opposed in principle to what a Green New Deal would represent. We all want to mitigate the devastation of our environment, save those most at risk from climate breakdown, and transition those whose jobs depend on carbon emissions into rewarding, meaningful work elsewhere in the economy. But the initial argument was always that it was too utopian. The price was too high. It was an over-reaction.

That response no longer holds.

The actions required in the face of Covid-19’s threat shows us that the money is there if we want to spend it. Nations are able to work together without years of complex negotiation in advance. People are willing to sacrifice to save the lives of friends, neighbours, and strangers. Our society has been denuded by decades of the false gospel of neoliberal individualism. There are few bodies left that stand for solidarity. But that is what is needed if we want to develop the ideas that are lying around to make society more just, more equitable, and more secure after this dreadful catastrophe.