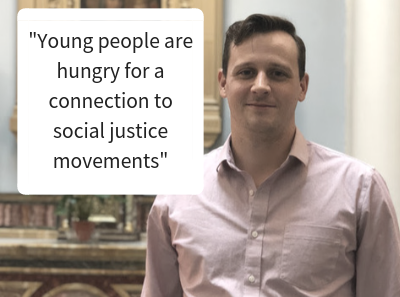 Matt Cuff is the senior policy advisor of the of the Office of Justice and Ecology (OJE) of the Jesuit Conference of Canada and the United States. He visited Ireland recently and spent time in the Jesuit Centre for Faith and Justice (JCFJ), exchanging ideas and collaborating with our Deputy Director, Eoin Carroll. They aim to find areas where they can align more closely on issues around penal policy advocacy, which is a focus of both centres.

The OJE’s mission is threefold. It involves networking with other Jesuit institutes, including on the US/Mexico border to advocate for the rights of migrants, and also with Jesuit schools and universities and with its peer organisations. It is also involved with education around social issues and Catholic Social Teaching; especially concerning the experience of the demographics that the organisation works with, e.g. incarcerated people. These two goals work towards fulfilling the centre’s primary function – advocating on behalf of vulnerable individuals and groups in society. It does this by engaging with policy makers and government, by gathering support from similar social justice groups and by meeting with big businesses who have troubling environmental and human rights practices, such as mining corporations. A notable success of the OJE came from its meetings with Monsanto. The centre questioned the company’s practice of filtering water from a dam in Democratic Republic of Congo; a procedure it subsequently ended.

Issues of interest to the OJE closely mirror the key areas of interest of the Jesuit Centre for Faith and Justice. It is concerned with environmental justice and the message of Laudato Si’. One issue they have been recently involved with is the Dakota Access Pipeline campaign. They worked closely with indigenous communities who were trying to protect their land from exploitation. Economic justice, primarily the conditions for low-wage workers in service industry jobs is also an area of advocacy for the centre. Housing and homelessness is a problem in the US, as it is in Ireland and the centre is involved with several groups who are addressing this.

Another area in which the OJE is heavily immersed, in common with the JCFJ, is criminal justice and prison reform. The USA contains 25 percent of the world’s prisoners, despite having just 5 percent of the world’s population. More than 25 million people are currently incarcerated. The centre runs several initiatives: it is involved in restorative justice and brings Ignatian spirituality and retreats into prisons, it supports individuals on release and it has a chaplaincy programme. The Jesuit community in the USA has a long history of being present to these populations and places great value on the lived experience of these individuals.

The OJE also tackles issues which are currently contentious in the US, include migration, which is often in the headline. It focusses on border policy and on the effects that having undocumented parents has on children who have grown up in the United States, and yet are not citizens. They work closely with the Jesuits in Central America on this and related issues.

Staff at the OJE engage directly with US senators and other elected representatives. They have invited groups and individuals to come on board with their work by inviting them to take part in campaigns including the Ignatian Carbon Challenge. This initiative highlights actions that people can take on an individual or institutional level to reduce their carbon footprint by reducing single-use plastic consumption. It allows people to connect with the movement building around the issue. They have also spearheaded Campaign for Hospitality to refugees which prioritises the importance of being present for migrants and aims to change the language around the issue to make the US feel like a welcoming space for them.

The OJE works closely with the Ignatian Solidarity Network which began in 1990 as a response to the assassination of Jesuits in El Salvador. One of its major achievements in engaging with young people has been the march of 2,000 high school students to Capitol Hill, the site of the US government, to meet with elected officials. The march encourages political engagement and a culture of advocacy among the pupils. Matt says in his experience “people, especially young people are hungry for a connection with social justice movements”. It is hoped that by encouraging an awareness of social injustice in their formative years, that it will remain with them as they move through life.

Matt’s visit was an opportunity for the member of the JCFJ team to reflect on the commonalities of Jesuit organisations across the world and on the shared experiences of staff and communities in the US and Ireland. It also enabled us to see the differences in our criminal justice systems and the relative harshness of US penal policy. We will continue to collaborate with the OJE and the Ignatian network in our shared mission of creating a more just society.