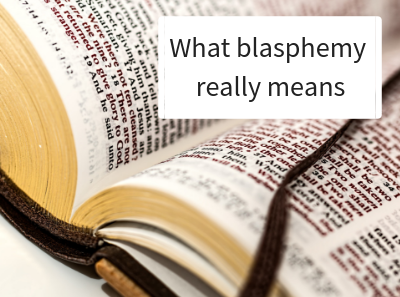 Kevin Hargaden’s piece in today’s Irish Times puts the recent blasphemy referendum into context, saying the real blasphemy exists in those who utter pious words to people in deepest need and yet offer no help to provide them with the essentials of life.

rish citizens have voted to remove the word “blasphemous” from a sentence in article 40 of the Constitution. In passing the referendum, it has been agreed that those 11 letters will be removed and the Government will be able to revoke the law which only came into effect in 2009 that made it an offence to intentionally publish or say something that is grossly abusive or insulting in the religious sphere.

Once this takes effect, the clause will still declare the publication or utterance of seditious or indecent matter an offence, which means that hate-speech of a religious nature can be legally challenged. If, in time, it is appropriate to draft new legislation which protects the human right to religious expression, such a move would be constitutionally coherent.

We are often told that this is an age of increasing polarisation, where through the influence of social media we are lost in our own little bubbles of discourse and that common ground is hard to find. Whatever else can be said of this referendum, it certainly brought people together. Every major political party supported its removal. The Irish Inter-Church Meeting, which brings the Roman Catholic church together with the major Protestant denominations, along with Orthodox, independent, and migrant-led churches, declared the clause to be largely obsolete. The Evangelical Alliance of Ireland joined with Atheist Ireland to protest at the blasphemy law.

In Ireland, it seems, blasphemy is an ecumenical matter.

As a theologian whose work is concerned with the point where Christian claims make contact with the social and political moment, the conversation around this referendum was fascinating. The biblical opposition to blasphemy is so clear – you shall not take the name of the Lord your God in vain – that it is literally one of the famous commands. But the constitutional clause had very little in common with the Christian understanding of blasphemy. This gulf can be described very simply.

That shift from having God at the centre, to putting man there, is ironically a blasphemous move.

That shift from having God at the centre, to putting man there, is ironically a blasphemous move
There was a long time when Ireland was a censorious society. Many of the finest Irish writers of the last century, including Brian Moore, John McGahern, and Kate O’Brien, were subject to censorship. Films were regularly cut or outright banned. Acknowledged classics that now appear utterly innocuous, such as Fantasia, Brief Encounter and The Big Sleep were not initially given a release in Ireland. There was a widely shared consensus that an important function of the State was the protection of public morality, and public morality was understood in religious terms. In the documentation that surrounded the forming of the Constitution, there was some discussion about where the blasphemy clause should fit and what form it should take, but its inclusion was never questioned.

As a legal construct, blasphemy cut across the theological concept. In the Hebrew scriptures, the call to hallow the Lord’s name has political significance. The militaristic superpowers of the region were indiscriminate in their worship, which is to say they worshipped the powers-that-be. Israel was called to a distinctive way of living. Caring for the widow and the orphan and welcoming the stranger were the just actions that flowed from right worship.

You can dismiss the Abrahamic religions as untenable and still appreciate how the laws around blasphemy in Ireland inverted that dynamic, as they do in the nations where such laws persist. Instead of gearing society towards the powerless, blasphemy laws tend to be written by and for the powerful.

The early Christians were accused of being atheists by their Roman neighbours because of their blasphemous refusal to make public sacrifices to the gods of the state, which guaranteed the success of the imperial forces in battle and protected the peace and harmony of the city. This stubborn willingness to stand opposed to the powerful status quo has been at the heart of the finest examples of Christian faithfulness through the centuries. The great modern theologian, Dietrich Bonhoeffer, who stood against the Nazis at the cost of his life, wrote that blasphemy is when we “leave the hungry unfed while saying that God is closest to those in deepest need”.

In Ireland today, when almost one-quarter of a million children experience poverty and nearly 4,000 children are without a home, the blasphemy that should preoccupy the minds of those who think themselves Christian is not, primarily, witty, mean things Stephen Fry might say. Christian leaders were correct that the law was largely obsolete. It was never used, so it can barely be missed. What remains relevant, however, is the blasphemy of so many who are content to utter pious words to those in deepest need, yet do nothing about their lack of basic necessities of life.