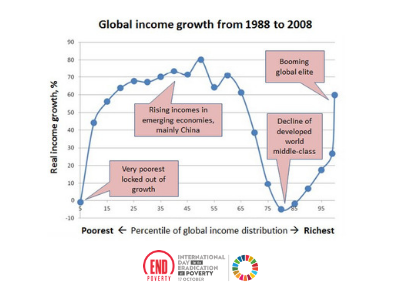 Global poverty is one of those seemingly rare topics where there might be good news to celebrate, says Kevin Hargaden.
The controversial Harvard psychologist Steven Pinker argues in his bestseller Enlightenment Now that “inequality in the world is declining” (p. 105). In the recently published Goalkeepers’ Report on the output of their philanthropic foundation, Bill and Melinda Gates note that the percentage of people living below the extreme poverty line has shrunk from 36% in 1990 to 9% last year (p. 6).
The economist Branko Milanovic has recently attained a sort of academic celebrity with his “elephant graph”, a key feature of his excellent 2016 book Global Inequality, which demonstrates that apart from the plutocrat class (who can re-brand themselves as “philanthropists” and publish self-aggrandizing “goalkeeper” reports on the state of global social development), “the great winners” from the last generation of globalisation “have been the Asian poor and middle classes”. It is important to note the corollary: “the great losers, the lower middle classes of the rich world” (p. 20).
Each of these analyses, in their place, make a valuable contribution to the conversation about poverty. Yet as different as they are, they all share a common flaw which is of critical importance on this, the International Day for the Eradication of Poverty. Each of them is committed to a particular kind of moral reasoning which we might call “graphtacular”. The argument rests on data-sets and the results can be depicted pictorially, and therefore we can all too easily assume the argument is coherent all the way through. Yet, of the three writers, on Milanovic accounts for the remarkable role played by China in reducing global poverty.
The graphs all look healthy, with poverty declining at a satisfying clip and equality rising in certain places at a surprising rate. But we can be fooled into neglecting that the baseline they are using is the radically insufficient figure of US$1.90 a day. This barely is beyond sustenance in even the poorest countries in the world. The person removed from Pinker’s definition of the poor are likely to still be profoundly impoverished.
This matters because increasingly our moral imaginations are shaped by such visual representations. Through seductive infographics, arguments are often assumed and causation inferred without warrant. It makes a world of difference whether inequality is reducing because of free-market globalisation, or because of more effective state-directed governance in places like India and China. The vision of an inclusive world, free of poverty, requires attention to detail. Good news can still be found, and when it is found, it should be celebrated. But the struggle for justice demands a sceptical scrutiny of claims and outcomes that often even those who most laud Enlightenment values fail to deliver.