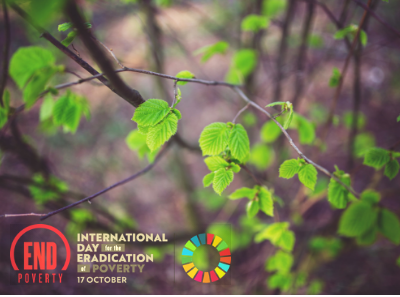 Since the first observance of the International Day for the Eradication of Poverty on 17th October 1987, the signs of a worsening global environment have become consistently visible: record breaking temperatures, diminishing ice cover and rising sea levels, collapsing biodiversity, and increased extreme weather events. The deterioration of nature diminishes access to water and food, negatively undermines human health and wellbeing, and impacts on the ability of vulnerable populations to sustain livelihoods, and cope and adapt to climate extremes.

In many parts of the world, poverty is also the outcome of an exploitive economic paradigm which increasingly, commodifies nature and prioritises profit over environmental wellbeing. Consider water, for example. Despite its scarcity, and despite access to safe drinkable water being a basic human right, there is a growing tendency towards the commodification of its supply. Sectors such as mining and oil extraction, large scale agribusiness, and logging – the products of which are heavily intertwined into our daily lives – drive the mass consumption of land and forests and drive poverty through the displacement of communities and violation of human rights. The crisis of global poverty and the death of nature are not independent, but closely intertwined. The earth’s ecological limits are being surpassed; the gap between rich and poor widens.

The theme of this year’s International Day for the Eradication of Poverty is “Coming together with those furthest behind to build an inclusive world of universal respect for human rights and dignity”. Building an inclusive world must involve taking just, timely and transformative action to mitigate climate change and halt global environmental degradation. Only a proper diagnosis, however, of the causes that underpin the relationship between poverty and environmental destruction, can lead us to the right solutions. By refraining from the mass consumption of the surroundings of the poor; perhaps it is wealth that needs to be eradicated, not poverty.