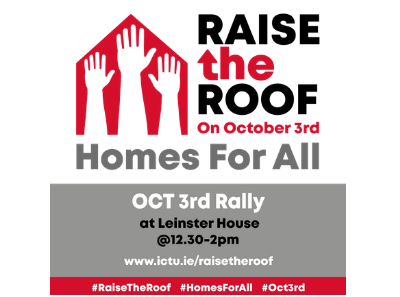 “The homeless and housing crisis is the biggest social problem that Ireland has faced in a generation,”  says Peter McVerry SJ. Support the Raise the Roof housing rally tomorrow and protest against the government’s failure to adequately address the crisis.

Homelessness has trebled since 2014. The economy is apparently in recovery, but we have 10,000 people homeless, of whom 3,800 are children. Rural homelessness may still be smaller in absolute terms, but in recent years it has increased significantly in many areas.

Whatever way it is calculated, Ireland is consistently ranked as one of the most prosperous countries in the world. We have the fastest-growing economy in Europe. What excuse do we have for these stratospheric figures for homelessness? In the words of Pope Francis:

If homelessness was the only issue, it would still be an issue so severe as to warrant widespread political action. For Christians committed to a just society, it is scandalous that we cannot meet people’s basic needs. For those who declare themselves pro-life, the fact that thousands of children suffer poverty so extreme that they do not have a place to call home should prompt urgent action.

But homelessness is simply the sharp edge of this problem.

Rents have risen alarmingly – in some cases by over 80 per cent – and are increasingly unaffordable for people on average incomes. Again, this is not a problem suffered only in cities. Meath and Louth have proportionately endured the most oppressive rent rises. Young people, especially young families, are economically crushed under the obligation to pay exorbitant rents – if they are even able to get rental accommodation in the first place. Older people living in the private rental sector and relying on modest retirement incomes live with the anxiety of losing their home as a result of rent increases – and of being unable to obtain any affordable alternative.

Over 70,000 households – which means more like 165,000 people – are on local authority housing waiting lists. More than a quarter of these households have been waiting seven years or more for a home. Last year, across the entire country, and including both houses built by local authorities and those built by approved housing bodies, just over 800 social houses were built to meet this demand.

The dominant policy response by successive government to growing waiting lists has been to use the subsidisation of rents in the private rental sector to meet social housing need. This policy costs almost 2 million euro a day. Therefore, it cannot be for lack of money that the problem is not being solved. It is either that the Government is ideologically committed to the deeply flawed plans currently being pursued, or there is insufficient political will to overcome the obstacles to ensuring an adequate supply of social housing.

But the problem is deeper again. It has now reached the stage where just ten years after our economy was destroyed (in part) by a housing bubble, Ireland is again in a mania. Irish house prices have almost doubled in real terms in the last generation, have grown much faster than our European neighbours, and now the average price of a home is out of reach of the average family.

The Government’s solution to this problem is a plan called Rebuilding Ireland. It is now in its third year and the crisis continues to deepen. Instead of committing to the steps that will ease the pressure, which have been clearly articulated by sources as disparate as the United Nations Special Rapporteur on the right to adequate housing and the Jesuit Centre for Faith and Justice, the Government remains wedded to its ideological commitment to a market-driven response. Its latest initiative, a new Land Development Agency, promises to give thousands of acres of publicly-owned land to private property developers over a twenty-year period. The numbers of social and affordable houses that will be provided will be minimal. The levels of profit won by those who get the contracts will not be.

Tens of thousands of people on social housing waiting lists.

No one is unaffected by this crisis. Even in the most affluent of communities, family members, friends, and neighbours will be suffering – often silently – as a result of inadequate, or unaffordable or insecure housing and the risk of homelessness.

“There are probably over half a million people in this country whose housing situation is causing them great distress. They include people who are homeless, those who are living in overcrowded accommodation, those who are living in unaffordable and often poor quality private rental accommodation, those still living with their parents because they cannot afford to move out, those who are in long-term mortgage arrears and facing the threat of re-possession. It is an issue that touches on the dignity of every person in the land. To have a home is a fundamental, basic human right and that right is being denied to far too many people in Ireland today. That should be a matter of serious concern for the church.”

In this context, peaceful public marches are the obvious response from citizens who want communities fit for the 21st century, built with children and the environment in mind, meeting the basic needs of every person. Protests are not solutions to the complex problems we face. But they will force resolution from our leaders and those with the power to change things.

Irish Christians historically come out in large numbers over political issues that matter to them. Pro-life marches continue to draw large crowds and many who protested against water charges were prompted in part by the clear Catholic Social Teaching against privatised water.

From the rallies organised around the sermons of Martin Luther King that secured civil rights in America, to the prayer-protests that helped to bring down the Berlin Wall, many of the most startling victories for justice have come to pass when Christians have realised that they have the potential to make a change. We support charities which respond to the immediate needs of people who are homeless and that is right and proper. But charity is only ever meant to be an emergency relief. When Jesus declared his mission in his hometown of Nazareth, he proclaimed that it was good news to the poor (Luke 4:18).

We can say it is better that individuals and families who are homeless in hotels, B&Bs, and the institutions we call “Family Hubs”, than being exposed in doorways on the street. But these emergency responses are in no way sufficient. Christians worship the homeless God (Matthew 8:20), but are called to provide for the basic needs of life to everyone (Deuteronomy 15:7). The prophet Isaiah had much to say about prosperous societies which did not extend justice to the poor. His teaching is clear that there is no version of holiness that satisfies itself with doctrinal rigour, or liturgical purity, but does not act for the sake of the marginalised:

Is not this the fast that I choose:
to loose the bonds of injustice,
to undo the thongs of the yoke,
to let the oppressed go free,
and to break every yoke?

Is it not to share your bread with the hungry,
and bring the homeless poor into your house.

When your neighbour is suffering, when the rich get richer at the expense of the poor, there is a Christian compulsion to respond. We gather on Sundays to worship a God who expects our actions to be just on every day of the week! As Christians have been politically active in their opposition to needless wars, legalised abortion, and commodified water, they should consider mobilising for the sake of those beaten down by the housing crisis.

A Call to Action

The Raise the Roof campaign is a broad coalition made up of trade unions, student groups, housing agencies, voluntary organisations, and other campaigning groups which demands action on the housing crisis. These groups are organising a rally at Leinster House on Wednesday, 3 October 2018, from 12.30 to 2 p.m. It will be just one of many such events planned in the coming months up and down the country.

This is a time for action. As shepherds of flocks, priests have influence. Just as other social issues are addressed from the pulpit, the need to provide homes should feature in homilies. Just as parish groups organise around other social issues, they need to organise to show solidarity to those squashed by the housing crisis. Solidarity goes beyond charity. It seeks to listen and understand. It is not satisfied until justice is done. One concrete step we can all consider is to commit to join the rally on Wednesday. Time is short, but the need is urgent. If that is not feasible, there will be other opportunities to join protests and rallies. Participation counts.

Ordinary Christians can make an extraordinary contribution to Irish society. Solidarity with people who are poor and suffering is the logical consequence of worshipping a God who is poor and suffering. Now is the time to act. Now is the time to side with justice. Christians cannot stand by while their neighbours suffer. Action is demanding, but such a time demands our action.