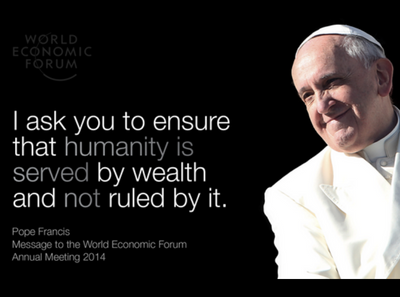 Pope Francis’ visit to Ireland is a cause of excitement to many and dismay to others. Beneath the flurry of events associated with the World Meeting of Families and the simmering controversy around protests, his visit is an opportunity to reflect on one of the major emphases of his papacy, says Kevin Hargaden.

In his first major document, Evangelii Gaudium, Francis was clear in his denunciation of the neoliberal variety of capitalism that is so influential around the globe and is almost a new orthodoxy in Ireland:

“As long as the problems of the poor are not radically resolved by rejecting the absolute autonomy of markets and financial speculation and by attacking the structural causes of inequality, no solution will be found for the world’s problems, or, for that matter, to any problems. Inequality is the root of social ills” (EG 202).

The political commitment to let competitive markets meet fundamental human needs has been shown to be morally, socially and economically bankrupt time and again, especially since the 2008 global crisis. But Irish political life remains in thrall to the belief that the free flow of capital will somehow bring prosperity to all.

As a direct consequence of this irrational fundamentalism, 10,000 Irish people now live without homes. Week in and week out, the government evade the obvious response to this problem and avoid committing to a renewed social housing project. Vulture funds and corporate landlords continue to immiserate Irish people, disproportionately affecting the poorest in our society. But it is sacrilegious to suggest intervening in the market for the sake of our neighbours. Such heresy cannot be countenanced!

Ireland continues to lag behind its already paltry obligations when it comes to climate change. With every passing month there is growing evidence that our entire civilization is facing an unprecedented catastrophe. Even instinctive climate sceptics are forced to reconsider as the previously temperate Ireland endures hurricanes, snow drifts, and summer droughts. To adapt to climate change requires a fundamental shift from an individual mindset to a communal imagination. This is anathema to neoliberalism. To respond to the challenge facing us entails weaning ourselves off our addiction to carbon and our absurd belief in never-ending economic growth. The neoliberal religious spirit of modern Ireland cannot conceive of such a transformation.

Pope Francis arrives in an Ireland that is confident in its status as a progressive, secular society. Yet when we dig below the surface we find that so many of our shared assumptions are grounded in this belief that competition is good, that markets are efficient, that some people deserve to be winners and it is hard luck for everyone else.

This may no longer be a Catholic country (whatever that would be!), but that does not mean we are no longer religious. For many, our ultimate hope rests not in Jesus, but in Mammon. Francis has many opportunities for prophetic speech and action during his short visit. We can only pray that he finds time to expose the paradoxes at the heart of our faith in markets.