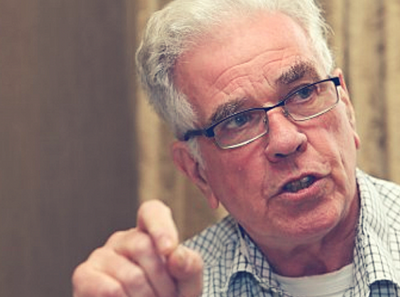 Pope Francis, in everything he says and does, takes the side of the poor and marginalised over and against the wealthy and powerful. He challenges the global structures which deny many their basic human rights and maintain people in their poverty and suffering, while enriching the few, says Peter McVerry SJ.

Basic human rights should be guaranteed by the constitution or laws of a country and provided, not by charities, but by the political structures of that society. In Ireland, all these basic human rights are denied to some. The right to housing is denied to many thousands who are homeless; Brother Kevin’s food centre, providing 1,000 hot meals a day, testifies to the fact that some people go hungry every day. Hospital waiting lists testify to the denial of healthcare to some people when they need it. Traveller children, living on the side of the road, are denied their right to education by constantly being moved on and unable to settle in a school. While the right to work is available to more and more people at this time, some of that work is low-paid, below the living wage, or zero or low hours’ contracts.

Many others live in stressful conditions – overcrowded homes, with three or even four generations living in a three or four bed house, adults living with parents because they cannot afford their own home, those living in appalling private rented accommodation but unable to complain for fear of being evicted into homelessness; those in private rented accommodation who are stressed out that their rent may be increased to a level they can no longer afford, those 43,000 households living in houses with mortgages in arrears of more than two years, afraid to open the post in case it is a letter from the bank seeking repossession. Meanwhile the banks are making over €1 billion profit (tax free!), many (not all) landlords are making a killing with rents higher than at the peak of the Celtic Tiger, and foreign investment funds are telling their shareholders that, of all the countries in which they invest, buying residential property in Ireland is the most profitable.

Compassion always has a political dimension. Jesus was not crucified because he told people to love one another. No, he was crucified because real love challenges vested interests. Unless the Church takes sides, in this, the fifth wealthiest country in the world, the fastest growing economy in the EU, home to 50,000 millionaires, where more and more people and families are forced to live on the street, it will continue to be irrelevant. “When you are accustomed to privilege, equality feels like oppression.” (Author unknown). If the Church takes sides, if the Church calls for more public housing (inevitably located close to private housing), a more equitable healthcare system, genuinely free education for all children, a living wage for all workers, it will be persecuted, as Jesus was.