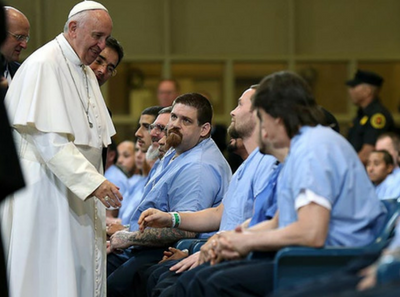 Eoin Carroll’s article in the Irish Times looks back to the arrival of John Paul II in 1979, when 76 prisoners were granted early release, and questions why there is no mention of an amnesty to coincide with the visit of Pope Francis.

‘The last papal visit to Ireland resulted in 76 prisoners being released early. Recent media reporting on the 1979 amnesty focused on revelations that senior officials feared that when the pope was addressing the nation in the Phoenix Park, empty homes were at risk of being robbed by the released prisoners. They played it safe and waited until he left. In contrast to the paranoid officials, newspapers were apathetic. There were no headlines warning people to lock their doors, or editorials attacking politicians for being “soft” on criminals. The Minister did not have to defend his actions. It was simply an act of humanity.

Pope Francis will, as did John Paul II, make reference to prisoners. He regularly visits prisons and speaks publicly about the need for reform. Unfortunately, this time round there will be no announcement of a prisoner amnesty, but why not?

Prison amnesties are nothing new. Bulgaria marked its membership to the EU with one and US presidents often issue pardons.

In Thailand royal celebrations regularly include amnesties, and Cuba, ahead of Pope Francis’s 2015 visit, released 3,500 prisoners. While neither country has a prison system that we should aspire to, even in harsh regimes compassion is found.

There is no legal barrier to an Irish amnesty, it could achieved by granting more remission from an individual’s sentence or by using “temporary release”.

Contained within the prison rules is a provision that allows for a greater level of remission to prisoners who have completed “authorised structured activities”. Unlike standard remission of one-quarter, they would be eligible for release after serving two-thirds of their sentence. Data available shows that only 138 received enhanced remission in 2016. Yet, we know that approximately 2,000 prisoners are “model prisoners”, as they are on the highest regime standard, meaning that they are actively engaging with structured activities. Clearly there is scope for more prisoners to be granted enhanced remission, but they are at the mercy of the Minister.

Alternatively, there is a simpler mechanism to offer an amnesty – more than likely how it was implemented in 1979 – which is the use of temporary release (TR) whereby a prisoner can be released at any point in their sentence. If they breach the terms of their release they are recalled. Historically TR was used to deal with overcrowding, resulting in accusations of a “revolving-door” prison system. The relevant legislation is now used to allow early release on to structured community programmes, but could be used for an amnesty.

Today the prison population stands at 4,000. This is in sharp contrast to 1979 when the figure was 1,140. Such an increase cannot be fully explained by rising crime levels or population increase or closure of other coercive institutions. The reality is that, we as a society, have decided to continue with a belief that locking more and more people up, mainly in closed prisons – 6 per cent are in open prisons – for longer periods of time, is a necessary and appropriate response to certain types of crime.

You would be forgiven for thinking, because of the numbers, prison must truly have been a sanction of last resort in 1979. However, penal reformers at the time thought otherwise. Less than a year after John Paul II’s visit, Seán MacBride SC chaired The Commission of Enquiry into The Irish Penal System. The Commission, which included Michael D Higgins and Mary McAleese, found that there was excessive use of imprisonment recommending that “the long-term aim should be to reduce very considerably the number of offenders who are detained in prison”.

While not giving an exact figure, it is reasonable to infer that they believed the daily population could be halved to 600 (still some 150 higher than a decade earlier). To today’s penal reformers, never mind politicians and civil servants, these would be fantasy figures. Yet, and understood 40 years ago, penal expansion should always be a concern. If ignored, and as history shows, it is incessant.

To address today’s growing prison population there is a need for politicians to decide on an acceptable figure at which to cap the prison estate. It then becomes the responsibility of legislators and policy makers to bring in measures that prevent a breach. The Oireachtas Justice Committee, which has representatives from across the political divide, are well aware of this. Launching its Report on Penal Reform and Sentencing in May this year its members unanimously agreed that the prison population should be reduced by half. This would mean a prison population of around 2,000.

Why not coincide Francis’ visit with announcing a prisoner amnesty? It would be an act of compassion and pragmatically, a way of reducing the prison population. Granting enhanced remission would have an immediate effect, while expanding early structured release programmes would avoid a “revolving-door”.’