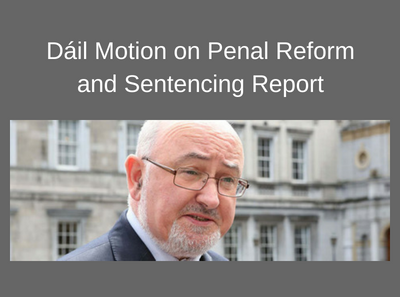 A motion on the ‘Report on Penal Reform and Sentencing’ of the Joint Committee on Justice and Equality, came before the Dáil to be debated on Thursday, 28 Jun 2018. The JCFJ was one of the stakeholder groups that made a contribution to the report and we eagerly await its progession.
Deputy Caoimhghín Ó Caoláin, Caithoirleach of the Committee, put forward the motion that the Dáil consider the Report of the Joint Committee on Justice and Equality entitled ‘Report on Penal Reform and Sentencing’, copies of which were laid before it on 10 May, 2018.
To help the committee identify the issues affecting Irish prisons, it held engagements with the Jesuit Centre for Faith and Justice and six other stakeholder groups involved in the process; Irish Penal Reform Trust, the Victims’ Rights Alliance, the Probation Service, the Irish Prison Service, the Prison Officers’ Association and Simon Communities Ireland.
Ó Caoláin highlighted that the report contains 29 recommendations. ‘The committee took a great deal of time over the report as this is such an important area of its work and it is vital that we get it right. I believe we have got it right and I therefore urge the Minister for Justice and Equality and his Government colleagues to give the report their detailed consideration and to begin implementing its recommendations forthwith. As a society, we cannot afford to ignore this report’s findings. The Government, as the vehicle for change, has a duty to heed and to act.’
Minister for Justice and Equality, Deputy Charles Flanagan in turn thanked the the Cathaoirleach and the committee for its report on penal reform and sentencing which he acknowledged was detailed and comprehensive and noted that it has many implications across a range of services, and ‘covers many of the most important and challenging issues facing our criminal justice system in the treatment of those persons in society whom the independent courts system deems should be denied their liberty. It is important that we underline our policy on the prison system with a view to ensuring that when people discharge their sanction and pay their penalty by serving a period in custody and when they acknowledge the time in which their liberty was denied, they will be in a position to reintegrate into society in a way that benefits society, reduces offending and is in everyone’s best interests.’
Deputy Jim O’Callaghan, who is also a member of the justice committee said that ‘up to now there has been too much concentration on the sentencing of criminal offences being limited to terms of imprisonment and fines. This is probably the same all over the world. Any statute passed, regardless of its nature, generally has within it a reference to offences that can be committed and subsequent to that will be a section setting out the sentence for the commission of the offence.’
Deputy Louise O’Reilly drew attention to two areas which were areas of concern for the Jesuit Centre for Faith and Justice and were presented by Eoin Carroll at the consultation stage. The issue of overcrowding is ongoing and leads to problems in terms of prisoner and staff safety, and must be addressed promptly. ‘The recommendation to cap prison numbers and reduce the prison population over time through alternative measures must be given serious consideration’ she said, echoing the Centre’s own recommendations.
We are following the progession of this report and subsequent motion with great interest, and are hopeful that Minister Flanagan will adhere to his assurances that he is ‘very open to engaging with the Chairman of the committee on the report and the recommendations contained therein. I trust that I will have an opportunity to do so in the early autumn.’