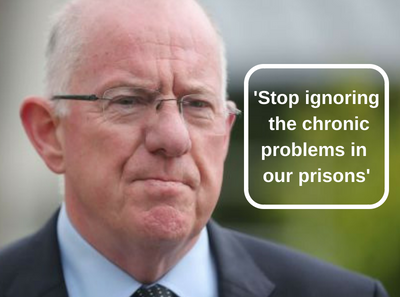 The Irish Prison Service and the Minister for Justice and Equality must stop ignoring chronic problems in our prisons including overcrowding, extended lock-up and a lack of provision for young adults, says the JCFJ, in response to today’s [25 June 2018] launch of the Irish Prison Service’s Annual Report for 2017.

The report contained the following figures about the number of committals in Irish prisons:

Deputy Director of the JCFJ, Eoin Carroll, said ‘Commitment to reduce the number of people in prison has stalled. The daily average number of people in prison over 2017 has remained the same despite the dramatic drop in committals to prison. This has had an impact on the increasing numbers having to share cells and use a toilet in the presence of others. Reducing prison numbers is key in creating a more humane prison system.’

JCFJ is concerned about the ongoing problems that are present in Irish prisons, due to chronic overcrowding, a lack of provision for the needs of young adults, and the persistently high number of prisoners on extended lock-up, and considers these issues as urgently needing attention.
Overcrowding has been an issue in the Dóchas Centre [the women’s prison at Mountjoy] for more than a decade, and is also a chronic problem in Limerick’s men’s and women’s prisons. By not adhering to the maximum bed capacity limits, the prison service is ignoring the Inspector of Prisons and flouting its own maximum capacity figures for these institutions.
The number of prisoners on extended lock-up – locked in a cell for more than 19 hours a day – has increased by approximately 12 percent in the year covered by the annual report and now stands at 481 individuals. Figures for the year previous [2016] indicated that over a quarter of the prison population were ‘on-protection’.
2017 marked a welcome end to children being detained in adult prisons. However, now is the time to outline a plan to address the needs of young and vulnerable adults in detention, which a JCFJ report identified as a particularly vulnerable group who require a greater level of intervention and support.
The JCFJ wants to see a reiterated commitment to reduce the number of people in prison as well as an explanation for why the number of prisoners offered a place on the Community Return Programme reduced so dramatically in 2017.
The ongoing problems in our prisons must be addressed without delay to enable all prisoners to have a chance of rehabilitation.