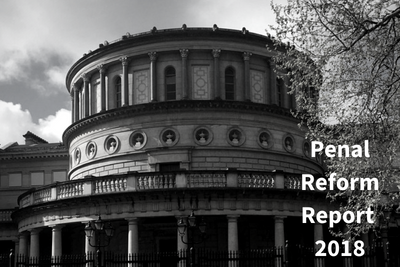 The launch of the Penal Reform and Sentencing Report took place yesterday [10 May 2018] in Leinster House, and was attended by representatives from key stakeholders including the Jesuit Centre for Faith and Justice (JCFJ).

The report is the result of deliberations by the Oireachtas Joint Committee on Justice and Equality which had previously invited presentations from  a number organisations in the sector.

The JCFJ was one of several advocacy and prison reform groups that presented to the Committee last year. On 22nd March 2017, Eoin Carroll of the JCFJ gave a presentation in which he emphasised the need to reduce the overall numbers of people in prison and to improve conditions, in particular for young adults.

The cohort of prisoners classified as young adults [18 – 24 age group] has been the focus of analysis by the JCFJ and was the subject of the publication Developing Inside. This document has ten recommendations regarding this vulnerable subset of the prison population; a synopsis of these were included in the 2017 presentation. Today’s Justice Committee Report states that young adults ought to be recognised as a distinct group and should be out of their cells for at least 14 hours per day, which reflects the JCFJ analysis and presentation.

The Committee has incorporated a number of JCFJ recommendations into the conclusions of the Penal Reform and Sentencing Report. These include proposals to lower the number of people who are sent to prison, cap prisoner numbers and adopt a varied mix of regimes and supervision to suit different subgroups of prisoners. The stated aim of the Committee is that the long-term aim of the penal system should be to move towards community-based, semi-open facilities. At present less than 5% of the prison population reside in open facilities.

The report also recommended that solitary confinement or extended lock-up should only be used in extreme circumstances due to the psychological effects on the prisoner. The JCFJ has asserted this previously and emphasised that this is a particularly harmful regime for the young adult group. In its presentation to the Committee it criticised the ‘one-size-fits-all’ model, recommending instead a more tailored approach based on security requirements with a minimum of 12 hours out-of-cell time.

The JCFJ presentation also included the view that a Housing First approach should replace the current proposed step-down facility for women who are exiting prison to help break the cycle of homelessness and welcomed the inclusion of this recommendation in today’s Justice Committee report. Housing First model was also mentioned as a key factor to lower recidivism rates among people leaving prisoners including those with addictions. The importance of family contact for prisoners was also noted in the conclusions, echoing the view of Eoin Carroll of the JCFJ.

The IPRT, Victims’ Rights Alliance and Simon Communities of Ireland, as well as key stakeholders the Irish Prison Service, Prison Officers’ Association and Probation Service attended the launch and also welcomed inclusion of their key recommendations regarding penal reform in Ireland.

Committee members who attended the launch were Deputies Caoimhghín Ó Caoláin [Chair of the Committee], Mick Wallace, Jim O’Callaghan, and Donnchadh Ó Laoghaire. Caoimhghín Ó Caoláin thanked the organisations and NGOs that made the recommendations to the committee last year and stated that the Committee would be presenting its recommendations to Minister for Justice, Charlie Flanagan imminently.