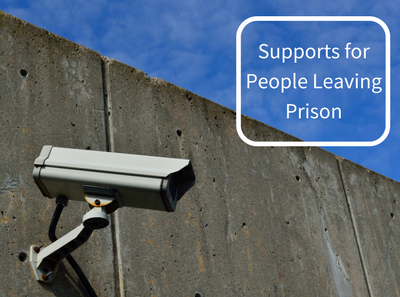 Walking out the prison door is a particularly vulnerable time for people and support is needed. Ten years after introducing a pilot Integrated Sentence Management (ISM) programme, which aimed to be ‘prisoner-centred’ and have a ‘multidisciplinary approach’, what progress has been made in preparing people for leaving prison?

Necessary resources for people leaving prison is still lacking, yet crucial in preventing those returning. Frustratingly, this is an issue that has been continually raised by the Jesuit Centre for Faith and Justice, the Irish Penal Reform Trust and many others.

Supporting someone in their preparation to leave prison needs to start on day one of their sentence and while this is espoused by prison authorities, in practice the necessary resources are not there. Within all prisons are Integrated Sentence Management (ISM) Officers, their role is to develop a personal plan with each prisoner which includes goal setting in the areas of education, training and personal development. Initially piloted in Wheatfield and Arbour Hill Prison in 2008, it has since been rolled out in all prisons. It is a very welcomed initiative and one which also reimagines the role of the prison officer. In theory each prisoner will have a preparatory plan for their release, from the day they enter prison. In practice, an ISM Officer has a very large caseload and will have other duties which often take priority.

Mountjoy Prison, for example, has only three ISM Officers for the 705 men in custody. Excluding those held on remand (30) and those ineligible (the approximately 15 percent who are serving sentences of less than a year), each ISM Officer has a caseload of 190 prisoners. What level of meaningful engagement can take place with this workload on top of the daily reality of being taken off ISM duties to fulfil security roles due to staff shortages?

Compounding this are the high numbers on restricted regimes and the challenge that ISM Officers have in developing sentence plans and access to services. In Mountjoy more than a third of prisoners are on some form of restricted regime.

A piecemeal service will result in its legitimacy being questioned. The Jesuit Centre for Faith and Justice has previously questioned ISM and its capacity to provide a meaningful and effective service to people in preparation for their release. Ideally ISM should be linked with the community, which can offer supports and where identified needs can continue to be provided for. This transition period is where ‘through the gate’ supports can make returning to life outside easier.

Leaving Prison and Through the Gate Support

The euphoria of freedom makes first few days after leaving prison a vulnerable time. Being prepared is crucial. While completely unplanned releases are not as prevalent as they were in the past, providing a more formal level of support is needed, stretching from, the prison gate back to the community. Over the past 10 years there has been a growth in voluntary sector organisations responding to this gap in supports. Unfortunately, they struggle to gain access to the person in prison and this is where ISM and through the gate services could work together more closely.

There are a number of reasons for this, but one that is repeatedly said is access. Prison visitors, as well as prison staff (teachers and psychologists), have to be accompanied by prison officers. With staff shortages there is not a sufficient complement of officers to chaperone everyone. Typically, and understandably, security duties trump all others which means that schools can be closed and access to professional visits curtailed.

Evidence of the need for ‘through the gate’ support is without question. The majority of people leaving prison are vulnerable, at an immediate risk of homelessness and many will have lost connection with previous support structures. The taken-for-granted social networks of family and friends that we all rely on, are often non-existent for people leaving prison.

Life after prison often presents people with the same challenges as when they stepped through the gates. Prison is not a panacea, nor is it a therapeutic environment where problems can be most affectively be addressed. They still have the same drug dependency, continue to struggle to find accommodation, (compounded by a housing crisis), and end up in emergency hostel accommodation. Society expects that after prison people will find a job and stay out trouble. Through the gate support can help to alleviate some of these issues.

Working with voluntary sector organisations the Irish Prison Service, though ISM officers, can benefit from their experience and expertise. This experience, increasingly, involves people who have experienced prison. A prisoner will hear the credibility and authenticity in the voice of someone who has walked before them.

An assessment is needed of the resources being provided for ISM and how through the gate supports can be offered to everyone in prison. The desire of the prison service, voluntary sector organisations and, most importantly, the individual who has been released from prison is to not return there. Meaningful and effective supports are needed for this to be a reality.