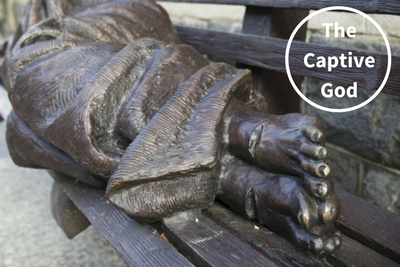 In week seven of our Lenten Reflection series, during Holy Week, we are asked to consider that the same crowds that welcomed Jesus as King on Sunday called for his death on Thursday. Yet in the gospels, Jesus teaches us that we should undertake the seemingly impossible task of laying down arms and taking up forgiveness.

Throughout Lent, we have considered the complex meaning of “home” in the Scriptures. Home is both a thing to be treasured – a destination longed for by the pilgrimaging people of Exodus – and a thing to be forsaken – as Abram is compelled to walk away from one home in search of another. Our collective mythical home in Eden is remembered; Jesus, Mary and Joseph’s home is abandoned, and for the Israelites in exile, home is mourned.

Jesus, famously, is the homeless god. There is a well-known modern sculpture of Jesus depicted as a contemporary person forced into rough sleeping which has been installed in many Anglican cathedrals around the world, including Dublin’s Christ Church. It is a gripping sight. The sculpture does what only art can do: it presents the beauty of skilled vision so as to confront us in our place and our time with a truth we would prefer to ignore. Jesus reminds us that “Foxes have dens and birds have nests, but the Son of Man has no place to lay his head” (Luke 9:58). There is, therefore, an undeniable connection between anyone who has no home and the one we believe is God-with-us.

The gulf between the hopes and expectations at the start of Holy Week and the devastation at its conclusion is a common topic of homilies and sermons. In our age of populist politics, when the appetite for tyrants is apparently growing, it is important for us to note that the same crowds that welcomed Jesus as King on Sunday called for his death on Thursday.

The gospels are never particularly committed to common sense. Jesus, after all, is forever teaching impossible things about never lying and always giving, laying down arms and taking up forgiveness. That his platform is not a populist one can be seen in how little interest even his followers have in paying attention to his teaching about the dangers of money.

Just because the crowd is calling for something doesn’t mean that we should join the chorus. Pope Francis encourages us to deepen our faith by finding the margins, and this can mean rejecting some commonly held opinions.

Jesus Christ, the Logos of God, the Alpha and the Omega, the Lamb of God, who takes away the sin of the world, spent his last homeless night on earth in prison. As we consider the final week before his crucifixion, we rarely dwell on the fact that God found the margins in a prison cell. We do not take the time to reflect on the fact that it was the baying calls of the crowd that kept him there.

As Easter approaches, prisons in Ireland are full of easily forgotten men and women. Most of us have no first-hand experience of what life inside is like. We are ignorant of the duration, circumstances, or causes of incarceration. We might have a vague sense that life is miserable in there or a fuzzy recognition that those who end up living in a cell probably grew up in certain areas and went to particular schools. Too easily, we allow the baying opinions of the crowd crowd-out the kind of careful consideration that would allow us to connect all these facts together.

Responding to crime requires atonement. For some, those who have committed a very serious offence, prison is considered a legitimate response to the harm caused. There are people in prison who cannot be forgotten this Easter because their crimes are all too painfully remembered by the victims.

But, while granting the baseline that prisons are necessary and, when run rightly, even righteous, in Holy Week we must grapple with a different perspective which is equally true but less commonly considered. Jesus was not righteously imprisoned. The Gospel writers are at pains to show us this. The Jewish court was not convened with due process. He was innocent of the crime with which he was charged. His treatment in prison was torturous. It is not intended to diminish the importance of criminal justice to insist that Holy Week confronts us with the crime of penal injustice.

Indeed, throughout the Scriptures there is a recurring motif around prisons that positions them as tools of oppression and social control. Joseph is unrighteously imprisoned after being falsely accused of the sexual harassment of Potiphar’s wife. Daniel finds himself in captivity because of a political conspiracy against him. Paul famously dies in prison awaiting trial in Rome; a victim of religious persecution. Biblically speaking, the prison is not a place of justice but of violent retribution. It is not a site where the state cares for and protects its citizens but where it warehouses its untouchables and its troublemakers. It should come as no surprise to us as we read the account of Holy Week that the prophets often found themselves behind bars.

There is a bridge here between the events in Jerusalem around 30AD and the Ireland of today. We do not have to imagine that prisoners are saints to recognise that when we pay attention to those who are imprisoned, we see the holes in Irish society most clearly. The prophets pointed out the gaps in the system, the systemic injustices, the profound inequalities that made a mockery of holiness. Jesus never flinched in calling to account the authorities of his day for their failings.

When we think about the conditions faced by people who call prison home, where psychiatric care is often absent and over-crowding is often present, we see clearly an aspect of our shared life where we are falling short. When we reflect on the reality that young people whose homes of origin are found in certain working class urban neighbourhoods disproportionately end up incarcerated, we are forced to consider how the entire society is shifted to the benefit of some at the expense of others.

Were we to get to know these men and women, we would soon realise that homelessness is often an aggravating factor that leads them into prison and the fate awaiting them upon release. To realise this fact and fight against it does not mean forgetting about justice or disregarding the suffering of victims, or diluting the agency and responsibility of people for their criminal actions. It means taking seriously the causes and purposes for forcing some people to live away from their home, captive behind bars.

There is a profound sense in which Jesus’ last night of captivity applies to all of humanity, caught and trapped in webs of sin that hold us down, from which we cannot escape. But alongside that deep spiritual truth, at Easter in 2018 in Ireland, let us consider the more concrete connection between our Lord who in the end made prison his home and the four thousand men and women who face this Easter behind bars.

1. The crowd is a critical character in the events of the Passion Week. It is the group to which you and I most likely belong. Our natural instinct is always to imagine that we would not be found among hoi polloi, but would have the courage to stand aside like some sort of suburban Sophie Scholl or Dietrich Bonhoeffer. But the story of Peter’s three denials reminds us of our more likely reaction. Are there places in your life where you feel you are merely following the crowd and drowning out the voice of conscience for the sake of a quiet life?

2. When we read the Scriptures searching for stories of people being imprisoned, there are many examples, but almost none of them are just. How does this seam of the biblical narrative influence how we engage with our present culture’s dominant narratives around justice?

3. Easter is a time for reflecting on the reality of hope; it is not optimism that denies suffering but is a confidence that considers the darkness in our lives from all directions and yet insists that is not the end of the story. The darkness surrounding those who are imprisoned can appear all-encompassing. How can you help the prisoners near you have hope this Easter?

The Taviani brothers are legendary Italian film-makers. In 2012 they won the prestigious Golden Bear award at the Berlin International Film Festival for their movie, Caesar Must Die. It follows the inmates of the high-security wing at one of Rome’s most notorious prisons, Rebibbia, as they prepare to perform a production of William Shakespeare’s Julius Caesar.

Watching these hardened criminals wrestle with this classic text will give you a glimpse of the truth about these men. They are murderers and drug-dealers and Mafiosi, but they are more than that. As they find brief moments of freedom on stage, the viewer finds the easy stereotypes about prisoners fall away.