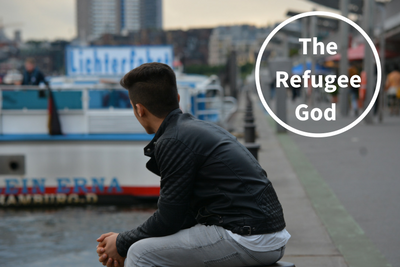 The worth of the Lenten season would be increased if we could make the connection between the refugee God we seek to know better and the refugee neighbour we probably do not know at all, says theologian Kevin Hargaden in this week’s reflection.

‘How rare it is that in the midst of the crass consumerism and sentimental spirituality that is modern Christmas that we reflect on the first people invited to visit the Messiah? The shepherds, bearing the smell of their sheep and filthy from the mountains, were impoverished, illiterate, and disrespected in their society. They are the first to intrude on the Holy Family and examine the tiny fingernails of God.

The second set of visitors are far more distinguished but even more unexpected: pagan scientists from a distant land. The first visitors may not have been able to read, but they understood what it would mean if God’s long-awaited Messiah had arrived. The second visitors, the Magi, could read the words on ancient scrolls and the stars in the night sky, but they most probably were unaware of the religious rituals and practices of the Hebrew people and their strange religion which insisted on one and only one God.

We can wonder how different the institutional church would be if it reflected more deeply on the high honour offered to the “unschooled” and the “unbelieving”.

But the story we consider this week focuses our attention on an even more subversive aspect of the Christmas story. In among the carols and the Coca-Cola Santa, we rarely reflect on the outrageous revelation in Matthew’s gospel that God is a refugee.

In popular devotion, that Magi have been reduced to three travelling kings. But the historical reality, to the extent that we can discuss such things, is that they were a band of scholars, perhaps from Persia or even further afield. They were the scientists of their age. Matthew’s gospel truncates their long and arduous journey into a single sentence. T.S. Eliot, millennia later, let his imagination profitably ruminate on their experience. Decades later, reflecting on what they found in Palestine, one of the wise men wonders, “were we led all that way for Birth or Death”?

The story that reaches its climax at Easter starts way back at Christmas.

The story, as Matthew tells it, sees the Magi received by King Herod. Their consultation intended to seek out local know-how but ended up sparking a military crackdown. One can imagine the series of interactions and revelations that were required for both sides to realise that they were looking for the same thing for very different reasons. The pagans intended to pay homage, the Herodians intended to wreak havoc.

After they complete their mission, the Magi avoid Herod on the way back. The last thing they want to do is reveal the location of the one they have worshipped to a man filled with murderous rage. Political power takes a different form in our age, but it reacts similarly when its authority is tested. The hundreds of modern martyrs around the globe testify to the fact that we still live in a world where political power often reacts with military force if a religious voice is raised in challenge.

Even with the Magi’s commitment to take the long way home, the word about the strange events in Bethlehem obviously spread. The angelic vision that warned Joseph to flee could have come weeks or months or even a year after the birth. But like the Magi and Abram, Joseph has the courage and the wisdom to respond in faith to a word that others might dismiss. The family packs up its belongings and seeks safety across the border.

In the classical artistic depictions of the Flight, it is a solitary endeavour. The husband and wife, bundled with their baby, cross the Sinai alone. We have every reason to think that they moved like the mass migrations we see today after homes are destroyed by political rampage. The King only issues the order to kill every baby boy after he realises the target has eluded his net. It is a punishment he chooses to dish out to those left behind. It is a warning that if you want to stay alive, you should stay loyal to the legitimate authorities, and not get caught up in religious enthusiasms. In this sense, the scene that Matthew relays in a few short sentences is repeated again and again in our current world.

Coptic Christian tradition holds that Joseph found work in Maady, which is now a Cairo suburb. There were certainly large centres of Jewish population in Egypt at the time and a man skilled in construction would have readily found work in the booming cities of the Mediterranean. We have no firm knowledge about exactly when or how the family returned, but the text is clear that their situation of exile and homelessness fits perfectly within the 1951 UN Convention on the Status of Refugees; people forced to flee their country due to violence and persecution.

Over the last year, a growing attention has turned towards the problem of homelessness in Ireland. This is understandable and important, considering how many are afflicted. Yet the way the conversation is framed can obscure the bigger picture of a full-fledged housing crisis. For everyone who is not a landlord, housing provision in Ireland is dysfunctional. Renters are priced out of the market, those trying to buy cannot keep up with the prices, yet many still find themselves in negative equity. Indeed, even landlords can be heard complaining that changes in the law and regulations make their task too onerous.

The moral suffering that flows from housing instability cannot be over-estimated. But there is one group who are almost always left out of the conversation about housing injustice. Asylum seekers in Ireland, those who seek the modern version of refuge that Joseph and Mary claimed for their son, are marginalised and hidden in plain sight. Direct provision accommodation provided by the government’s Reception and Integration Agency are often sites of protest at petty indignities that accompany the very restrictive form of “hospitality” we offer the traumatized and persecuted. Overcrowding is common, with families known to be housed, in some circumstances, in a single room. Facilities such as bathrooms are often shared. Little opportunity for the basics of domestic contentment are afforded; from the right to cook your own meal in many centres to the freedom to welcome friends to visit. Instead, the Centres operate on an institutional and for-profit basis. Their residents get by on a tiny allowance of €21.60 per week and, despite the Supreme Court ruling striking down the ban preventing asylum seekers working in Ireland, continue to have a very limited opportunity to access employment. Asylum seekers arriving in Ireland today face the prospect of a minimum of two years residing in these conditions, denied the possibility of living with dignity.

In Lent, we give things up. This well-established tradition allows us to put action around our thoughts at this time of year. Awaiting Easter, we consider what deprivation means; we act our way into a situation where we can imagine the humiliation on the cross. Humiliation and deprivation aren’t temporary performances for many. The plight of the refugee in our midst – the distant neighbour who confronts us on our border and calls on us for aid – is one where humiliation and deprivation, insecurity and doubt are everyday companions. There is great worth in committing ourselves to the season of Lent, preparing our soul for the drama of Thursday, the agony of Friday, the silence of Saturday and the death-killing climax of Sunday. But the worth would be greater still if we made the connections between the refugee God we seek to know better and the refugee neighbour we probably do not know at all.

We would advocate for that baby Jesus like our life depended on it.

This week, consider what that simple fact means for how we should react to the asylum seekers in our county.’

1. Where do we find traces of the shepherds and the Magi in the life of the contemporary Church?

2. Herod’s violence is no distant memory for many Christians around the world today. This Lenten period, how can you stand in solidarity with the persecuted church?

3. What church practices would you expect would flow from the factual declaration: “Jesus is a refugee”? How does the Irish church do compared against that standard?

4. Our Lenten practices “would be greater still if we made the connections between the refugee God we seek to know better and the refugee neighbour we probably do not know at all.” How can your parish intervene to support those whose only home is a Direct Provision centre? Is there a way for you to support organisations like JRS Ireland as they offer front-line care for asylum seekers in Ireland?

Irish peace activist Caoimhe Butterly’s The Sea Between Us, is a documentary available online which captures the real stories of refugees from their own perspective.