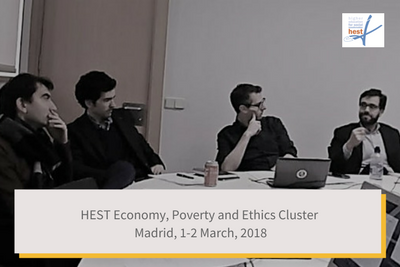 JCFJ Social Theologian, Dr Kevin Hargaden participated in the third round of meetings for the Higher Education for Social Transformation (HEST) initiative. The HEST Economy, Poverty and Ethics Cluster Update took place in Madrid, on 1-2 March, 2018.

‘The Society of Jesus maintains a large network of higher-education institutions and social-policy centres across Europe which educate tens of thousands of young people, and scrutinise a myriad of government proposals and policy initiatives.

The HEST initiative (Higher Education for Social Transformation) seeks to mobilise this network of research bodies so as to challenge realities on the ground by advocating for constructive change founded on solid research.

Going beyond an expression of our collective social responsibility, HEST is an attempt to put flesh and bones on one of the hallmark slogans of the Jesuit approach to life – that we should be men and women for others.

Seven research clusters have been established that aim to funnel this wealth of researching talent towards the issues that are most pressing in Europe today.

These clusters, comprising experts, analysts and researchers – both ‘J’ [Jesuit] and ‘lay’ – from across Europe, are meeting over the period of three years with the intention of providing meaningful and quality research so as to yield real-world advocacy proposals. They also hope to sharpen local recommendations through the pan-European cooperation and to strengthen the Jesuit Identity of Jesuit higher-education institutions.

The ambitious, ultimate aim, is that this project would roll for fifteen years, thoroughly transforming the internal self-understanding of Jesuit higher-education institutions and making a concrete difference for the most marginalised in our society.

I am a member of the ‘Economy, Poverty and Ethics’ cluster which seeks to take seriously the commitment made in Decree 1 of the General Congregation 36 that ‘Global Wealth Inequalities’ is one of the issues that Jesuits must pay particular attention to.

The group’s third workshop took place in early March in the Spanish capital of Madrid. Scholars and experts from Poland, France, Belgium, England, Ireland, and Spain comprise the group, which is largely led by economists. Its aim is an indepth exploration and analysis of what is really happening in the European economy, beyond the numbers.

A decade on from the last financial crash, there is widespread dissatisfaction with the so-called ‘recovery’. With this in mind, the group has focused on two critical issues:

• Models for company-formation
• Policies to deal with precarious labour

The first focus area will draw on Catholic Social Teaching to explore how the legal construction of corporations can place the pursuit of the common good right alongside the pursuit of profit; while the second will explore how the response to the economic crash of 2008 has left more and more people on the economic sidelines and how we should seek to address that issue.

HEST delegates braved snowdrifts and airline delays caused by the extreme weather conditions thoughout Europe to make it to the meetings. The host city, Madrid was buffeted by storm winds and heavy rains. But everyone in the group felt that the trip was worthwhile, despite the inclement weather.

The contemporary university is geared towards ever more intense specialisation and too often our individual research agendas, directed by abstract government rating-systems, get disconnected from the real-world problems we most want to address.

HEST represents a different way of researching: interdisciplinary, grounded in friendship and mutual values, dedicated towards the service of those most in need of help. In this, it is already a remarkable distillation of the finest parts of the Jesuit tradition.’