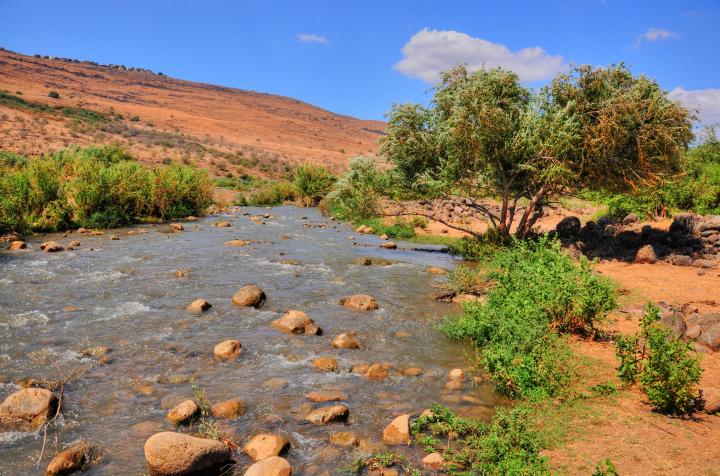 This week’s Lenten Reflection looks at Exodus and the Israelites in the desert to explore how the search for home sometimes leaves us discontented, regardless of how good our circumstances are.

Abram was called out of Ur and on that pilgrimage he received a new name (Abraham) and a lineage. But the children of Isaac and Jacob found themselves in Egypt, where, in time, they ended up as slaves, toiling under the sun, spending their lives building vast monuments to death. The search for home sometimes leaves us stranded.

The biblical narrative takes its next giant leap forward when a murderer with a speech impediment encounters a wonder of nature that not even David Attenborough could describe. Moses is herding sheep in the back of beyond, up on Mount Horeb, when he stumbles upon a bush that burns but is not consumed. The voice that called Abram to forsake his home is now heard by Moses. The I AM tells Moses that he listens. He has heard the cries of the oppressed in Egypt. The I AM is one who remembers. He recalls the promise he made to Abram. The call of God was painful for Abram, and it will be painful for Moses. He is to confront Pharaoh and lead his people out of slavery, into their new home. The call of God, when it comes to you, is unlikely to bear you a word of ease. The truth is to treasured, so why do we think pursuing it can come without a cost?

The story that follows is well known, if more informed by Hollywood blockbusters than biblical narrative. Pharaoh reacts as any imperial ruler would, when its energy source is threatened. He dismisses Moses as a crank and orders the building of the pyramids and the infrastructure of the Egyptian super-state to be accelerated. God responds as only God can, with ten plagues of increasing severity, which serve to awaken Pharaoh to the reality that for all the worship he receives, he remains an idol and not a deity.

The Israelites, led by Moses and his spokesperson Aaron, escape through the Reed Sea, and Pharaoh’s forces are devoured by the waters. Throughout the bible, the sea is a source of chaos, anti-order, a threat to be feared. The chaos that empire stirs up will always, ultimately, be empire’s downfall.

This is the story of Exodus, the defining tale of Israel. Who is Israel? They are the people set free from slavery, to be a light to the nations, a means by which other nations are set free. The journey from Egypt to the land promised to Abram should have taken about two weeks. It ended up taking forty years. One presumes that this is not because God had neglected to update his GPS. There is an internal growth that must be in place before we find true home. Until that level of maturity is reached, we will forever be discontented, regardless of how fine are our circumstances.

That long pilgrimage towards home, which is more than a logistical challenge, but a spiritual one, exhausts Israel. They are grumbling almost immediately. They forsake the God who has heard their cries of misery at the first chance, embracing again the idols that they themselves manufacture. They declare that the predictable life of slavery was better than the precarious life of liberty. Moses cajoles them and tempts them, chastises them and directs them, but when the time comes for their actual arrival at home, he is told that this is a step too far for him. Joshua will be his successor, and he will guide the Israelites into the home promised to them.

This is the story that we read this week. The Israelites stand on the border of their homeland. All that remains is for them to cross the Jordan. There are deep questions to be asked about the tribes and peoples who are displaced when the Israelites show up. How can this all seem as anything but injustice to the Hivites, Perizzites, or Girgashites when these Israelites show up and insist that God has given them the land for their own use? But the specific question that confronts us today is what courage is required if we are to make home?

After all, the Jordan was a raging river. Verse 15 describes it as in flood. The people who have come so far to find a home are now faced by apparently natural obstacles that cannot be traversed. The story of Exodus, this foundational tale that tells of a long wandering, comes to a climax with this band of weary travellers standing by the banks, watching this mighty torrent.

It is always hard to trust a word that purports to be from God. But how are the Israelites meant to go on when the divine word arrives and it appears so fundamentally irrelevant? The task of forging a river demands engineering. It requires a topological survey and the creativity of construction experts. Humans have, after all, been building bridges since long before the appearance of Pontifex Maximus. A blueprint for some iron-age version of a suspension bridge would have been a divine word to be welcomed. Boats raining from the sky would have been a miracle that fit the bill. Instead, the Israelites are told to send their priests to wade in the water.

This is not a solution. With suggestions like this, the realistic and tough-minded among the Israelites would have surely cried out to heaven, if they still believed anyone actually was up there to hear them.

The courage required from the Israelites to find home echoes in our present day. The economic and social doctrines of the New Testament do not just appear unlikely, but are positively irrelevant. Lend without interest? Give without limit? Spend on parties with no concern for tomorrow and support everyone who asks, even your enemies! Especially your enemies? This is not an economic platform that makes sense. We protest that no housing system could emerge from such a bundle of inconsistent and contradictory impulses. But maybe our grumbling is like that of the Israelites in the desert, who prefer slavery to liberation. Perhaps we have found ourselves on the banks of the Jordan, and now is the time for courage – to be brave enough to commit to holiness as our economic response to the housing crisis. Lend mortgages without interest. Give land without price. Spend on housing the families that have no hope of paying you back. Perhaps there is something to be said for dipping our toe in the torrential flow of God’s grace?

And what of the tribes displaced by this incoming Exodus? Is there not also wisdom to be found there? As bad as the Irish housing crisis is, there are still many ensconced in a very comfortable situation. Who was displaced for you to have what you have? When you are a person who has more than one house, how did that come about? It is unlikely that you physically evicted the rightful owner and took the property for your own by force. But in what ways have our hard-earned profits come off the back of anonymous others who have not shared in the spoils? To understand actual, concrete homelessness in Ireland, we must connect the dots between those who have much, and those who have nothing. Who are the Canaanites, Hittites, Hivites, Perizzites, Girgashites, Amorites and Jebusites in your story of housing?

1. “The call of God, when it comes to you, is unlikely to bear you a word of ease.” Where in your life does this resonate with you?

2. How does the realisation that the Exodus involved a fortnight’s journey stretched over forty years illuminate the journey you are currently on?

3. The Israelites quickly erect idols in the desert. As we consider the housing crisis in Ireland, what idol-worship might we be collectively engaged in?

4. We live in a moment when the Word of God can often appear irrelevant. What would taking the biblical teachings about wealth and justice mean, practically, for how you respond to the housing crisis?

5. A fundamental question persists and demands our attention. Perhaps consciously make time each day to turn it over in your head: Who was displaced for you to have what you have?

The story of Exodus is a recurring motif in popular culture. It’s an almost ubiquitous trope in science-fiction, for example. Think of one of glossiest big-budget movies of recent years, Passengers (2016), notionally about a colony of humans searching for a planet upon which to find home. One could even re-read Lord of the Rings as a story about the Hobbits’ desire to find home again.