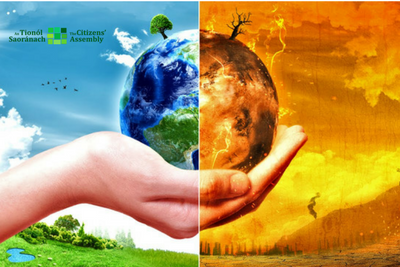 Climate change presents the biggest threat to human progress, well-being and security, and to the overall health and diversity of planetary ecosystems. Attending the Assembly as an observer, Catherine Devitt, Environmental Justice Officer with the Centre said:

“The Citizens have sent a strong signal to the government that it must engage much more seriously, coherently, and urgently on the issue.”

“The Assembly has recommended that climate change be at the centre of policy making in Ireland. To date, there are many examples to show that this has not been the case. Going forward, there must be policy coherence and consensus across all government departments, even if difficult political decisions have to be made.”

Following four days of presentations and deliberation, the Assembly voted on 13 recommendations in response to the topic: How the State can make Ireland a leader in tackling climate change.

“Climate change is happening right now, its effects are most keenly felt in some of the poorest regions of the world. We cannot afford a wait-and-see climate policy approach. The State has a responsibility to protect its citizens now and future citizens from preventable harm.”

“The extent of submissions made to the Assembly and the commitment of the Assembly in engaging on the topic clearly show that Irish society takes climate change very seriously. There is now a strong demand for ambitious political leadership to enable a just and transformative transition to a low carbon society.”

Other recommendations made by the Assembly include increasing investment in sustainable public transport, peat restoration and the phasing out of peat subsidies, enabling community ownership of renewable energy, a carbon tax on emissions from agriculture, and increased support for land diversification. During the Assembly, citizens and observers heard that many of these steps had multiple benefits including improving public health, lowering air pollution, and protecting biodiversity.

The recommendations will now form the basis of a report that will be presented to the houses of the Oireachtas for debate. Prior to the Assembly meeting on the topic, organisations, representative groups and members of the public were urged to make submissions on the topic. Overall, more than 1,200 submissions on climate change were received. In their submission, the Jesuit Centre outlined the seriousness of climate change, emphasising that considerable political leadership is required if the State is to, at least, make its fair share of the global effort.