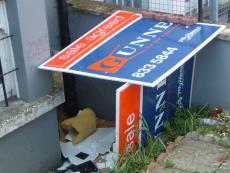 10th of October 2017 was Budget Day, and also World Homeless Day. It could have been the day the Irish Government committed to enshrining a right to housing in our Constitution, which would have had far-reaching implications for people experiencing homelessness.

There are currently more than 8,000 people in Ireland who are homeless; a number which has grown dramatically since the 2014 Convention on the Constitution’s Eighth Report on Economic, Social and Cultural Rights. The Convention’s Report has finally reached the floor of Seanad Éireann for debate. Having taken so long to get there, will it even be even noticed, on the day one post-budget? It needs serious consideration.

The Convention, comprising citizens who represent a cross-section of society, voted 84 per cent in favour of inserting a right to housing into the Constitution of Ireland. With such a sizeable majority in favour, it is arguably a mandate to Government to hold a referendum on the matter.

Eoin Carroll, Deputy Director of the Jesuit Centre for Faith and Justice, argued earlier this year that a right to housing would have several implications:

You can read Eoin’s paper here