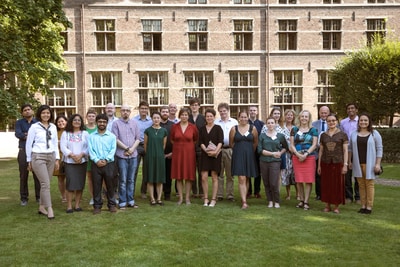 Jesus said that you cannot serve two masters. You either hate the one and love the other, or are devoted to one and despise the other. Yet what role does faith have in an age when the one true master often appears to be the market economy?
In the last week of August 2017, I considered this question as I represented the Centre at the UCSIA Summer School at the University of Antwerp. Drawing together a diverse group of young and established academics and researchers for inter-disciplinary dialogue, the week’s sessions were motivated by the question of how markets, states, and religions interact.
The topics discussed were remarkably diverse. An investigation of how religiously motivated spending informs economic growth in rapidly urbanising China could be followed by a detailed discussion of the theological motivations that drove Adam Smith to write his fundamental text on economics, The Wealth of Nations. What held the disparate subjects together was a serious intent to understand how the oft-neglected sphere of religious commitment shapes and is shaped by the political and economic environment. Leaders in their fields came together to mentor those just starting out and a culture of robust but respectful dialogue was maintained throughout.
Resting behind all such discussions in the Western world is the idea of a secular age. As the story was often told, with the advance of science, technology, and liberal democracy, religious belief – which was a holdover from a more primitive age – would recede from the public sphere and eventually disappear entirely. This belief became so widespread and well-established through the twentieth century that it became almost an article of faith for many in the social sciences.
It now appears to be an ill-founded faith. While it is certain that the role of religion is changing in the Western world, it is changing in different ways in different places. And many places around the world have undergone sustained religious revivals just as the secular theorists expected such devotion to fade away.
As the Centre for Faith and Justice, the changing role of religion in what we might call a post-secular Irish society is a central question. The nature of any contribution made by a Centre such as ours must be indelibly marked by recognition of this social situation. Learning from scholars of Chinese religion, or those studying evangelical Christianity in the United States, or people committed to charting how values and ethics develop among people raised in those pockets of the West that are truly post-religious directly informs our work here. It primes us to see the thin slices of space in Irish culture where distinctively Christian talk of grace and forgiveness can still gain traction. Spending time with those studying in wildly different settings gives us new eyes to see our own fields afresh.
The Christian churches in Ireland do not have the influence they used to have. Church leaders have been distanced from the top tables where the power-brokers sit. But as the Centre considers its focus areas – take for example Ethics and the Economy – it seems that distance is just the space we need to see things more clearly. The poor and the marginalised can be hard to spot when you are sitting in the seats of honour. The UCSIA Summer School renewed my conviction that the strange new age that Christians in Ireland have come into is one where they can find their voice again, untroubled by questions of sustaining power. And there is good news in that because that is a voice that could echo the one real master.
Kevin Hargaden is the Social Theologian of the Jesuit Centre for Faith and Justice