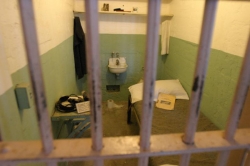 The UN Committee against Torture (CAT) will examine Ireland this week about its progress and compliance with the UN Convention against Torture and Other Cruel, Inhuman or Degrading Treatment or Punishment (UNCAT). The second periodic review under the convention will take place this Thursday 27 and Friday 28 July, at United Nations headquarters in Geneva, Switzerland.

The Jesuit Centre for Faith and Justice (JCFJ) has made a submission to the committee on the State’s treatment of young adults (aged 18-24) within the prison system. We have also worked closely with other NGOs who are attending the hearing to address issues of concern.

There has been progress since the first review was held in 2011, but Ireland still lags behind international standards for human rights in detention. Overcrowding in prisons is an ongoing problem especially for women in prison, and has consequences for prisoners that are humiliating, degrading and dangerous. The continued practice of sharing a cell involves problems ranging from having to use the toilet in the presence of others to the risk of a ‘hazing’ initiation rite and the threat of violence, which may be fatal.

The Centre’s 2016 report ‘Developing Inside: Transforming Prison for Young Adults’ identified 18 to 24-year-olds this distinct group as having a unique set of requirements and characteristics and highlighted the needs of this distinct group.

In relation to Ireland’s examination by the UN Committee the JCFJ has a particular concern about the number of young adults on restricted regime and on the lowest regime standard. The prison service’s Incentivised Regimes Policy (IRP) used in prisons to reward and punish behaviour is impacting young adults disproportionately. Young adults aged18-24 have unique characteristics including risk-taking, poor impulse control and susceptibility to peer pressure which result in them being overrepresented in the prison population. It also means they have an impaired ability to maintain behavioural standards which are necessary for this restrictive regime, which is reflected in their higher than average numbers on it. The ‘Basic’ level of the IRP restricts access to family visits, telephone calls, gratuity, single-cells, education, work and training.

Restricting telephone calls and family visits as punishment for errant behaviour is not the withdrawal of a privilege from a prisoner but a violation of their fundamental human rights. If the young adult has children, it is also a breach of their right tohave ‘personal relations and direct contact on a regular basis with his or her parent’ as stated in the UN Convention on the Rights of the Child (1989).18 to 24-year-olds are also on extended lock-up at a higher rate than the general prison population, which can see them locked in their cells for up to 23 hours a day.

The UN Committee against Torture (UNCAT) comprises 10 independent experts. By signing up to the Convention, Ireland committed to having its compliance reviewed periodically. The hearing will assess how Ireland measures up to international human rights standards in regard to its treatment of some of its most vulnerable and marginalised citizens. The committee will also consider submissions from NGOS concerned with torture and ill-treatment in places of deprivation of liberty, of migrants and asylum seekers in addition to institutional abuse, violence against women and sexual and reproductive rights.