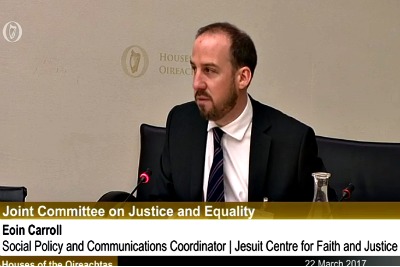 Irish prisoners are locked up for on average seventeen hours a day, and this routine has not changed in thirty years. So said Eoin Carroll, Advocacy and Social Policy Research Officer in the Jesuit Centre for Faith and Justice.

He was addressing a receptive Oireachtas Justice Committee, which has two Jesuit School past pupils – Jack Chambers TD and Jim O’Callaghan TD – among its members.Eoin was invited to speak before the Committee on penal reform on March 22 and in his presentation (which can be accessed here: 16:40 in) he highlighted the need to reduce the amount of people that we are sending to prison each year as well as the number in prison each day. He referred back to an earlier Oireachtas report which recommended reducing the daily prison population to below 2,900, yet today that number stands at over 3,700.

Referencing the fact that the prison routine has not changed in over 30 years, where prisoners spend approximately seventeen hours per day locked in their cells, he recommended that prisons need to be smaller, more open, and more dynamic in how they prepare people for when they will, inevitably, be released.

Following on from the Jesuit Centre for Faith and Justice’s report Developing Inside: Transforming Prison for Young Adults, Eoin referred to three of its ten key recommendations. Firstly, that young adults are a distinct group, that psychologically they are more like children and therefore should be the responsibility of the Minister for Children and Youth Affairs, not the Minister for Justice. Secondly, young adults are disproportionally detained, for various reasons, on a restrictive regime. Some are locked in their cell for twenty-three hours per day. Eoin stated that this practice needs to stop. Lastly, he emphasised that because of the particular needs of young adults, they should be detained in a dedicated facility which caters for their specific concerns, something which is provided for in Northern Ireland.

To view Eoin’s presentation, it begins 16:40 in here: and the final part of the presentation is accessible here.